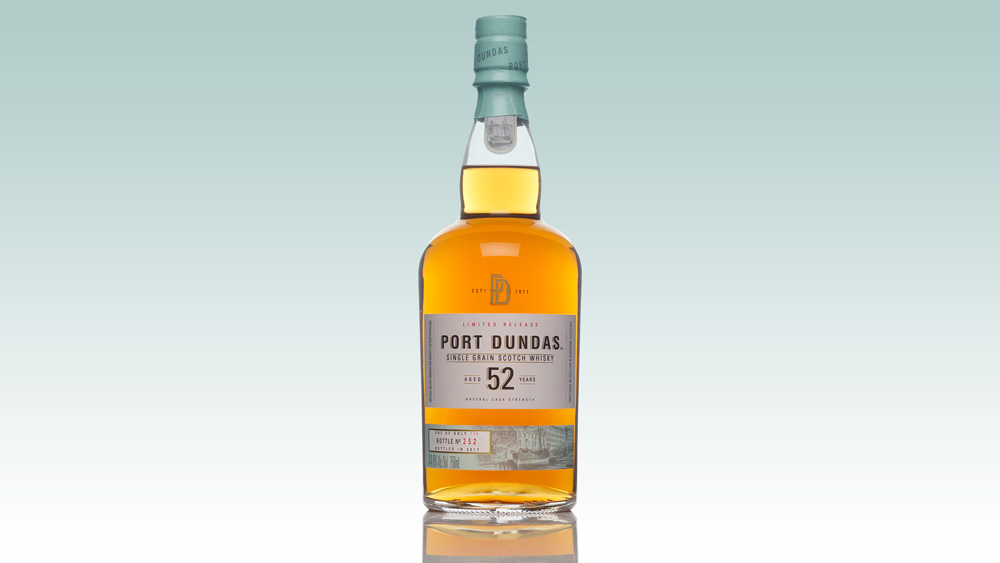 Grain whisky has long been largely (and perhaps unfairly) shunned by whisky enthusiasts. Relatively few drinkers even understand what it is. It’s distilled from a combination of malted and unmalted grains, including but not limited to barley; wheat and corn are usually the other major players. It’s distilled in a column still rather than a traditional pot still, which imparts a lighter, more delicate flavor than malt whisky. It’s generally used as a type of binding or smoothing agent in blended whiskies, bringing together the multiple single malts found in most blends and getting the disparate flavors to play nice with one another.

Grain whisky is rarely bottled on its own. When it is, it’s almost always cheaper than comparable single malts. But in recent years, as more aficionados and connoisseurs seek whiskies off the beaten path, the category is emerging as a legitimate player in the whisky world. Perhaps the most thrilling release yet is Port Dundas 52 Year Old Single Grain ($900), the oldest whisky to ever be released as part of the Diageo Special Releases series. The “single grain” designation means it was distilled at a single distillery.

Laid down in refill American oak hogsheads in 1964 and bottled last year, the whisky has a sweetly earthy aroma that alone sends the message that this is not a standard single malt. On the palate there is an herbaceous grassiness, mingling with sweet vanilla and tropical fruit notes like coconut and banana. It’s lighter and a little more floral than a malt whisky, but no less complex, enjoyable, or thought-provoking.

This whisky alone could confer legendary status to the Port Dundas distillery, which has been closed since 2009. With any luck, we’ll continue to see newly matured single grain releases from its warehouses for the next few decades or so. In the meantime, only 752 bottles of the 52 Year Old have been produced for worldwide consumption. Purchase on sight.