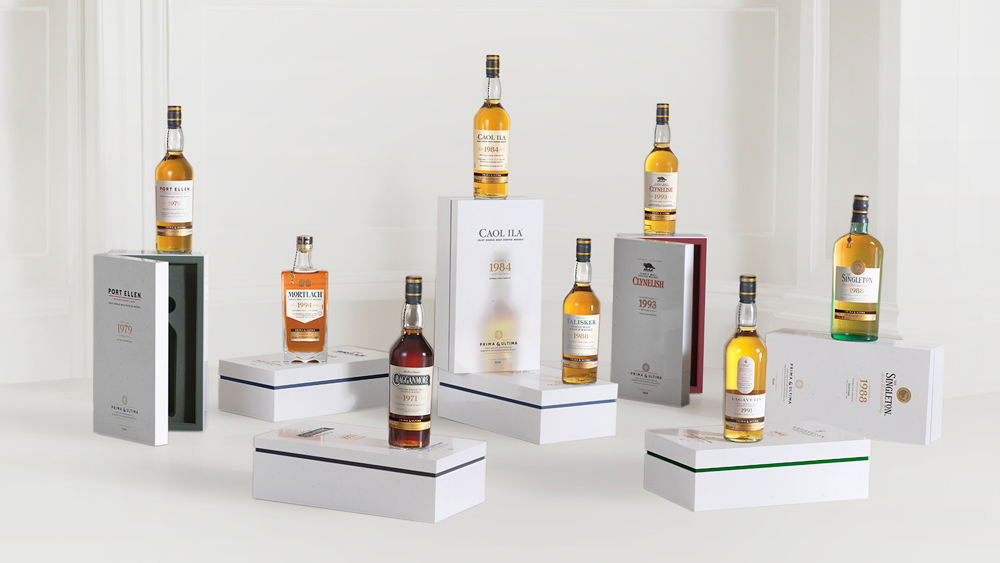 Here’s your chance to acquire an eight-bottle collection of some of the rarest single-malt Scotch whiskies ever offered for sale as a set. Appropriately christened the Prima & Ultima Collection, they represent the first and the last vintage whiskies of their kind, having been drawn from an extremely limited number of casks that had been aged for decades by such iconic distilleries as Lagavulin, Mortlach and Port Ellen.

Adding to their exclusivity, each of these single malts were personally selected from the scarcest barrels in the vast warehouses of Diageo—one of the world’s largest spirits producers—by their internationally celebrated master blender, Jim Beveridge, who has spent the last 40 years overseeing more than 10 million casks from over 29 different distilleries, and which represent every whisky-making region in Scotland. Consequently, the eight whiskies in this inaugural Prima & Ultima collection constitute a virtual liquid history of twentieth century single malt whisky distillation.

For example, the 1971 Cragganmore comes from the last cask to be filled with spirits made from the old coal-fired stills that were previously used by this Speyside distillery (In 1972 Cragganmore converted their unique short-necked, flat-topped pot stills to steam heat produced by an oil-fired burner). Thus, this complex 48-year-old whisky is the last to be made by Cragganmore’s “old time” distillation method. The 1988 Singleton at Dufftown marks the year when this single malt’s now-characteristic grassy-fruity flavors were first created as a result of an innovative slow-distillation technique; this 30-year old-whisky was taken from three of the remaining casks. And the 25-year-old 1994 Mortlach comes from one of the last of the first-fill Pedro Ximenez and Oloroso-seasoned oak casks at the distillery. It is a classic example of the muscular characteristics that “The Beast of Dufftown” (as this whisky is sometimes called) is known for. All of the single malt whiskies in the Prima & Ultima Collection were non-chill filtered and bottled at their natural cask strengths, which range from 87.4 proof for the 1971 Cragganmore to 110.2 proof for the 1994 Mortlach.

“Over the past 40 years I have worked intimately with our distilleries across Scotland, and I’ve been fortunate enough to witness great changes in the whisky industry,” said Beveridge. “Each of the eight whiskies I’ve selected for Prima & Ultima tells a tale of heritage and craftsmanship, and I’ve chosen them from distillers of great personal importance to me.”

The inaugural release of The Prima & Ultima Collection will be available for purchase at £20,000 (about $25,000) per set directly through appointed Prima & Ultima agents across the world (Individual delivery arrangements may need to be made for U.S. purchasers due to the non-standard 70 cl. bottle sizes of the collection). A global registration will open on July 22 for whisky collectors who wish to purchase one of the 237 full sets, each of which will be accompanied by a 20 ml sample of each whisky and a limited-edition book of personal anecdotes from Beveridge (contact diageorareandexceptional@diageo.com for further details).

In addition, Prima & Ultima set No. 1, with Beveridge‘s signature on each of the eight numbered bottles, will be auctioned off online by Sotheby’s August 26 through September 2, with all proceeds from this sale being donated to WaterAid, a UK-based nonprofit focused on water accessibility and sanitation worldwide.

Given their irreplaceable rarities, it is a matter of conjecture as to whether or not any of these whiskies (their 20 ml sample bottles notwithstanding) will ever be opened, or simply kept as an investment. Either way, they represent a diverse and fascinating insight to the individual characteristics of vintage single malt whiskies.