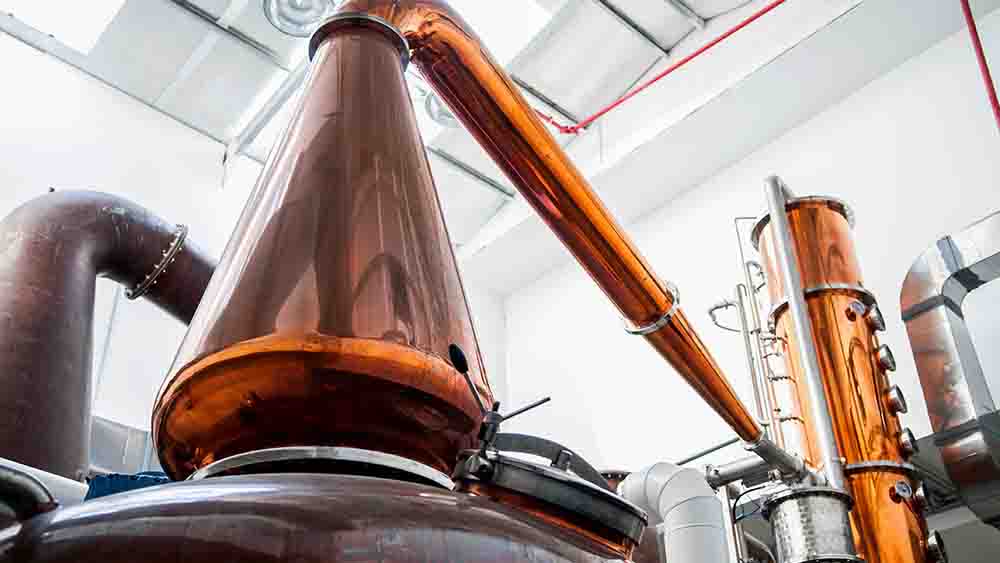 Something is afoot on the banks of the Kentucky River. In a soot-covered building called Warehouse P, an experiment is taking place: Hundreds of barrels filled with bourbon and whiskey lie in somnolent rows. The temperature is a constantly frigid 45 degrees. And time, it seems, is slowing down.

Warehouse P is the love child of Buffalo Trace (aka the maker of some of our favorite whiskeys, such as Pappy Van Winkle) and Last Drop Distillers, a London-based spirits company that specializes in unearthing old and rare casks. The duo has come together amid the Frankfort uplands with a common goal: to bring Scotland’s cool conditions, which are ideal for slow and even whiskey maturation, to American spirits.

Kentucky’s drastic temperatures, which fluctuate between 100 degrees in the summer and 0 degrees in the winter, have a mercurial effect on the aging process of spirits. Warm weather pulls the resting liquid deep into the barrel staves, exposing it to the character of the wood, while cold weather pushes the liquid back out, imbuing the flavors of oak into its makeup. The ever-changing alchemy makes over-aging a risk—and it’s the reason most bourbons are aged between four and 12 years. By regulating the temperature year-round, however, Warehouse P has the potential to craft the oldest whiskeys in American history.

“American bourbons that have been matured for up to 50 years simply do not exist,” says Rebecca Jago, joint managing director of Last Drop. “We’re hoping to achieve something that has previously been impossible: super-aged, high-quality and delicious American whiskeys.” Patience will no doubt be a requirement in this lengthy (and costly) trial: Last Drop doesn’t intend to release its first bottle for at least 25 years—and what it will taste like is anybody’s guess. Says Jago: “This is clearly an experiment and, as such, the outcome cannot be guaranteed.”

Last Drop isn’t the only mad scientist in spirits. Other distillers are tinkering with the aging process with the reverse intention: to mature whiskey in only a few years—or a few minutes. Halfway around the world in Israel, Milk & Honey is betting that the hot and humid climate of Tel Aviv can produce a (nearly) proper whiskey in record time. Last year, its Young Single Malt—which matured for months, not years—won second place at the Whisky Live Tel Aviv show. The awarded spirit is so young, in fact, it can’t even technically be called a whisky—that term is reserved for liquids that have been aged a minimum of three years—but its smoky, complex flavors have garnered fans nonetheless.

Venturing further into science-fair territory, meanwhile, are Chris Mendenhall’s whiskeys and bourbons, which the master mixologist “ages” at the Ritz-Carlton, Washington, DC’s Quadrant bar using sound waves. “I discovered that sound waves could accelerate aging,” he says, explaining that the waves “push” the liquid through the wood of the barrels to change the qualities of the spirit. “It led me to research distilleries and whiskey makers who are using advanced technology, such as pressure and sound waves, to expedite the aging process.” Mendenhall’s first release, Bourbon Style #1, is a 120-proof, 9-year-old Kentucky bourbon “base spirit” that’s been exposed to 20,000 pulses per second over 30 1977 1989 minutes in his customized homogenizer. The result is a richer and more rounded spirit that tastes years beyond its age.

Of course, not everyone is on board with these spirited experiments. Bourbon and whiskey purists, not to mention organizations like the Distilled Spirits Council of the United States (DISCUS), remain skeptical that the aging process can—or should—be manipulated. “For many years, people have attempted to speed up the aging process, because time is money,” says Frank Coleman, a senior vice president at DISCUS. “But most have been unsuccessful because we are talking about a natural process.”

That said, we raise a glass to the spirit of adventure.