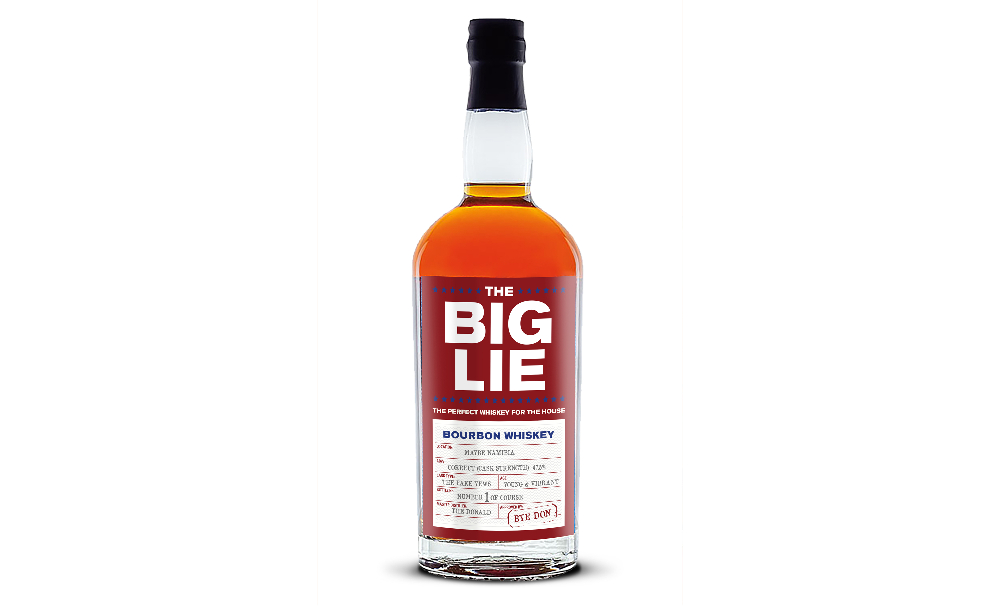 Hot on the heels of the first Big Lie scotch whisky, which was cheekily dedicated to the demise of British PM Boris Johnson, comes an American version that just might trump the first. This new bourbon comes with intentionally scurrilous details from online whiskey retailer Caskshare, and has its sights set squarely upon our own stable genius ex-President Donald Trump.

It’s no secret that the whiskey industry is full of false narratives and alternative facts designed to push product, so it’s a breath of fresh air when there is complete transparency about the source and background story of a spirit. This Not a Grain of Truth Bourbon is decidedly not that, which is entirely the point here. The details provided by Caskshare are as follows—the source distillery’s location is “maybe Nambia,” the whiskey’s age is “young and vibrant” and the bottle number is “number one, of course.” Legendary master distiller “Donald” is the creator of this bourbon, and the bottling was approved “Bye Don.” The ABV is cask strength of 47.5 percent, and while no specific info has been provided about the angel’s share for this whiskey it looks like Donald was unable to stop the steal.

The tasting notes provided by Caskshare are vivid and intriguing: “On first inspection [the whiskey] has a straw color and there’s the whiff of “covfefe’” echoing summer nights by the Mexican border on the nose, followed by the gentle aroma of burgers and fries in the Oval Office. The Devil’s cut here is tremendous but there are no bad hombres to be found in this bottle.”

Clearly, the real Donald Trump wouldn’t find this at all amusing, but he’s a famous teetotaler so no harm, no foul. Caskshare launched in the UK in 2021, and is set to launch in the US this September. According to a rep for company, they will be working with ten craft distilleries here as well as importing scotch. In the meantime, you can explore the website and peruse exclusive whiskeys from distilleries that will be bottled when properly mature. If you’re interested in getting your hands on this “yuge,” “big league” bourbon, you can contact Caskshare to let them know you’re interested. The whiskey is priced at $80, which is certainly cheaper than buying Greenland.