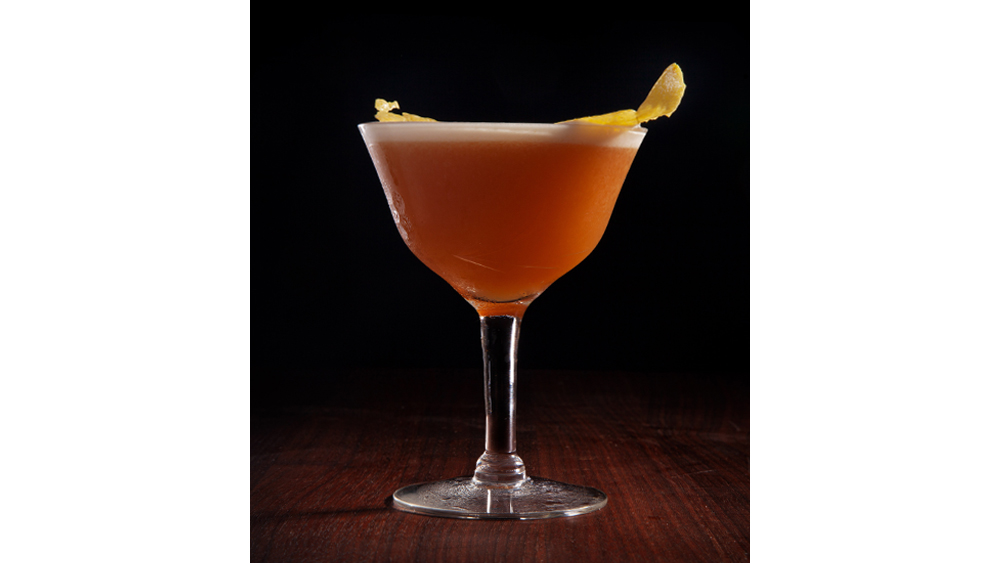 In a world where we can watch John Cena be both fast and furious as he N2O-boosts his V8 Mustang over a cliff and get caught mid-air by a “magnet plane,” should we even bother with the chase scenes in Bullitt or The French Connection? If in this year’s Jurassic World: Dominion we can watch photo-realistic velociraptors on a breathless high-speed chase across the rooftops of Rome, is there any point in watching the tension build in that darkened prep kitchen of Jurassic Park?

At the risk of sounding like a curmudgeon, I propose the answer is yes. I’m no Luddite—I’m not out here pining for a Walkman or pagers or anything like that—I simply believe that in matters of art and taste, it’s worth our time, every now and again, to look backwards.

The Earl Grey MarTEAni is such an occasion. It was invented around 2003 by Audrey Saunders, one of the leading lights of the early cocktail renaissance, and became among the house classics at her legendary bar, Pegu Club, in New York. Now, when I say “early” and “legendary,” it’s tempting to think this drink is on the far side of relevance, and in a way you’d be right. The name alone is dated—changing the grammar to reinforce the pun feels a bit like your uncle explaining why the joke he made is funny. At the end of the day, it’s just a gin sour with a tea infusion. What’s so special about that?

Some bartenders are liquid poets, feeling their way through a drink. Saunders, instead, was an architect, and infamous perfectionist. “She’ll make a drink eight hundred times before settling on it,” recalls Julie Reiner, in Robert Simonson’s excellent history A Proper Drink, “and I’ll make it fifteen times before I say, I think this is good enough.”

In her Earl Grey MarTEAni, she wanted a tea infusion, but didn’t like how it was turning out. “The tannins in tea, alone, can build up on your palate and exhaust it,” she told the New York Times in 2010, “which is one of the reasons why many people drink tea with milk and lemon.” The solution, she found, was right there in the histories of drinks like the Whiskey Sour. “Egg white in this drink achieves the same feat,” she said.

It’s not easy to ignore what we all owe Saunders. No one, for example, was making tea-infusions in the early 2000s. And that barely anyone was shaking cocktails with raw eggs. I’ve mentioned in this space before, in the case of Gold Rush and the Whiskey Sour, protein (egg whites here) bind to tannins, absorbing their astringency and making the resultant cocktail silky smooth. And the reason I know any of that is that Audrey Saunders figured it out.

So why—in a world where you can get a balanced egg-white cocktail at the airport, where bartenders are constantly pushing forward with innovative techniques and fashions and flavor—why make the Earl Grey MarTEAni? Because it’s easy and remarkably delicious, that’s why. The complexity of the tea plays perfectly into gin’s strengths without overriding them, the sweet/sour treatment makes it pop, and the egg white smooths it out, ensuring no hair is out of place. That it doesn’t use foraged nettles or use a gin made from upcycled popcorn isn’t the point. The point is that a great drink then is a great drink now, and worth revisiting.

Pegu Club closed in May 2020, but had already begun to be eclipsed in the press by the shiny and new.  This of course is inevitable, too, but a shame. “Yes, the menu itself, and the atmosphere feel a bit frozen in time now,” wrote Simonson for Grub Street, upon the bar’s 10th anniversary in 2015, “But, oh, that was a great time.”

Combine all ingredients in a cocktail shaker, and “dry” shake without ice for five to seven seconds, to white the egg. Add ice, and shake hard for 10 to 12 seconds. Strain up into a cocktail or coupe or, yes, martini glass, and garnish with a lemon twist.

Recipe: Many publications have written about this drink, and most faithfully reported Saunders’s original recipe. It is with the utmost respect that I tweak it, slightly. Hers has less gin, more simple syrup, and a sugar rim, and all three of those choices make the drink sweeter. In her defense, this was a time when people were ordering a vodka shot called the “Woo-Woo,” so the audience was a little different. My recipe, above, is industry standard for modern palates.

Tea: Earl Grey is a black tea blended or infused with bergamot. The citrus from the bergamot is particularly charming here, but any black tea would work, or honestly any tea at all. I’ve made this with green tea, with chai, chamomile, it’s all great.

To infuse: for a whole bottle, combine 4 tbsp loose leaf tea (or 3-4 bags) with one 750ml bottle of gin, and let sit at room temperature for one to two hours. Taste at one hour to see if it’s where you want it.

For a single or double serving, you can infuse 3 or 5 ounces in about 10 or 15 minutes, respectively, with a single tea-bag. You’ll need two ounces of gin for each cocktail, and even if you squeeze it the teabag will steal about a half ounce, so plan accordingly.

Gin: I hate to be a broken record here—I promise they don’t pay me a dime—but once again, Beefeater steals the show. For shaken sour-style drinks, from the Gimlet to the French 75, Beefeater overperforms. It could just be my palate, but I don’t think so. Saunder’s, for her part, used Tanqueray, which is another great gin but comes across a little boozy (though she used a different recipe—more on that above). I tried six infused gins side by side and they were all good, so it’s really not that important, but if you’re at the store right now, get Beefeater.

Simple Syrup: So simple you could train a hamster to do it: Equal parts sugar and water, and stir until the sugar is dissolved (takes about five minutes for room temperature water, and about 45 seconds for hot water. Keeps for a month in the fridge.

Egg White: Pegu Club was so groundbreaking, they actually got in bit of trouble with the city health department, who didn’t know what to do with an egg-white in a cocktail. Let’s assume you’re reading the warning at the bottom of a menu: “Consuming raw or undercooked meats, poultry, seafood, shellfish, or eggs may increase your risk of foodborne illness, especially if you have certain medical conditions.” It’s worth noting that they weren’t even accused of getting anyone sick, just that it might have conceivably been possible. For what it’s worth, I’ve never even heard of it happening. A fuller discussion of egg white safety vis-a-vie cocktails is here.