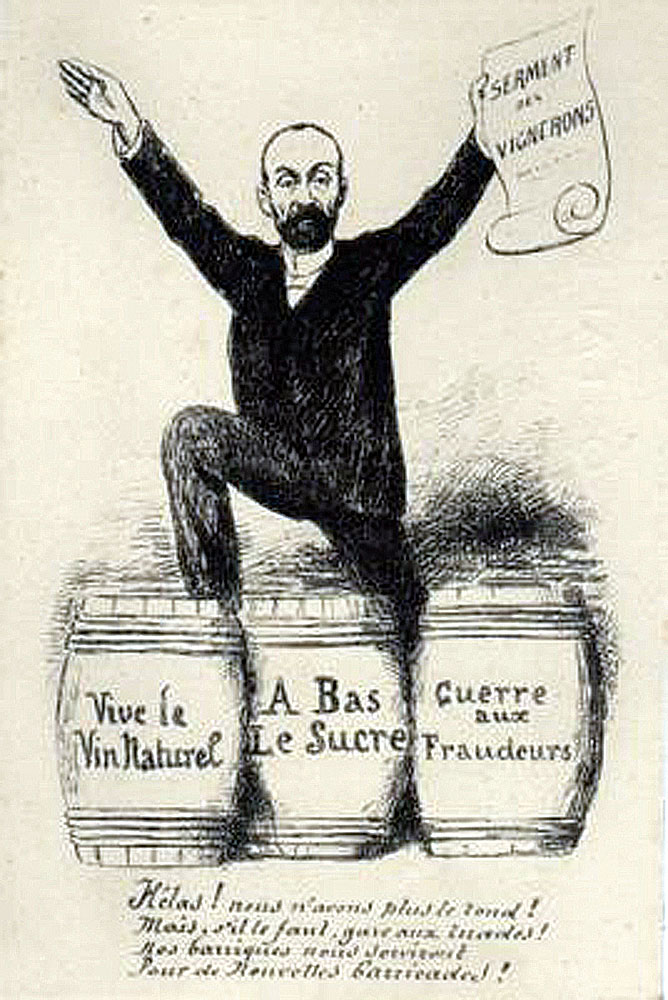 Call them terroir-ists, the seven Languedoc winemakers who, in June, appeared on French national television and, while wearing black balaclavas to conceal their identities, declared that “blood will flow” if President Nicolas Sarkozy did not do something to alleviate the malaise afflicting southern France’s wine industry.

Languedoc is not represented in “Top 100 Vintners”, because it is a source primarily of vin ordinaire—of Fat Bastard, not Old Bastard. Languedoc wine is not only ordinary, it is abundant. These two factors, when combined with a vast supply of inexpensive imported wine, beget depressed prices and restless, even desperate, farmers and vintners.

In their televised, prerecorded statement, the seven members of the Regional Committee for Viticultural Action, or CRAV, issued a call to arms to Languedoc winemakers. “Be worthy of the 1907 revolt,” one of the CRAV members read, “where several died so that future generations could live by their profession.”

The comparison between the CRAV’s campaign—which in recent years has included vandalizing a supermarket, hijacking trucks, and damaging a warehouse, each of which sold, transported, or stored foreign wine—and the 1907 uprising is timely; this is the centenary of the rallies. But it is not necessarily apposite. The demands might be similar, but the methods of persuasion are distinct.

The face of the 1907 movement was tanned and mustached and not hidden behind a ski mask. Marcelin Albert was a 6-foot-tall, 50-year-old grape farmer and café owner from Argeliers whose complexion, charisma, and deeds earned him the nickname the Black Apostle. Albert preached—and promised French Premier Georges Clemenceau—a civil brand of disobedience. “Yes, I am an anarchist,” he told a New York Times reporter, “although I do not believe in violence.”

As is the case today, Languedoc’s vignerons and vintners objected to the laws—or absence of laws—affecting wine prices. Albert and his peers were unable to compete in a market flooded with less-expensive wine that had been produced through chaptalization. (The process entails adding sugar to wine before or during fermentation to compensate for underripe grapes, thus enabling a vintner to artificially increase a harvest’s yield.)

In May 1907, in Perpignan, Albert led the first of a series of massive demonstrations. It drew 160,000 peasants, some of whom carried banners reading “To the pillory with the adulterators of wine” and “Death to the chemical fakers.” Such incendiary slogans notwithstanding, the march through town was peaceful.

The next demonstration, in early June, was considerably larger, but equally orderly. Some 600,000 of Albert’s disciples gathered in Montpellier. When he arrived, men grasped his hands, women kissed him, and the mob cheered, “Long live the redeemer! Live forever, our savior, Albert!”

At this and at every demonstration, Albert exhorted the crowd to remain orderly. Meanwhile, he and the winegrowers committee that he had formed were persuading the Languedoc peasantry to cease paying taxes and convincing some 300 local mayors and town council members to resign their positions, thus shutting down many of the region’s municipal governments.

Those actions ultimately prompted Clemenceau to order the arrests of Albert and the committee members, and in doing so, the premier broke the peace. Three days after the arrest warrants were issued, troops clashed with rioters in Montpellier and in Narbonne, leaving six people dead.

Four days later, Albert arrived at Clemenceau’s office in Paris. Clemenceau later described how Albert wept and promised to make amends. He also noted that he gave Albert 100 francs to cover the cost of his trip home.

Clemenceau had declined to have Albert apprehended in Paris, but eventually the vigneron surrendered himself for arrest and then was exonerated a month later. In the interim, the government enacted a law limiting the amount of sugar that could be used in making wine. Despite this partial victory, Albert was shunned by his neighbors in Argeliers, who were familiar with only the premier’s description of the meeting in Paris. Albert, who later would vainly dispute Clemenceau’s account, responded by resigning from the winegrowers committee and returning to his café.

When Albert first had arrived home, a crowd gathered outside his house and berated him, until Albert thrust open his door and declared, “No one has the right to interfere with me like this after what we have done for you!” His followers were more concerned with what he had done lately. By groveling in front of Clemenceau, and especially by accepting money from him, Albert, in their eyes, had betrayed them. Their apostle had become a Judas.