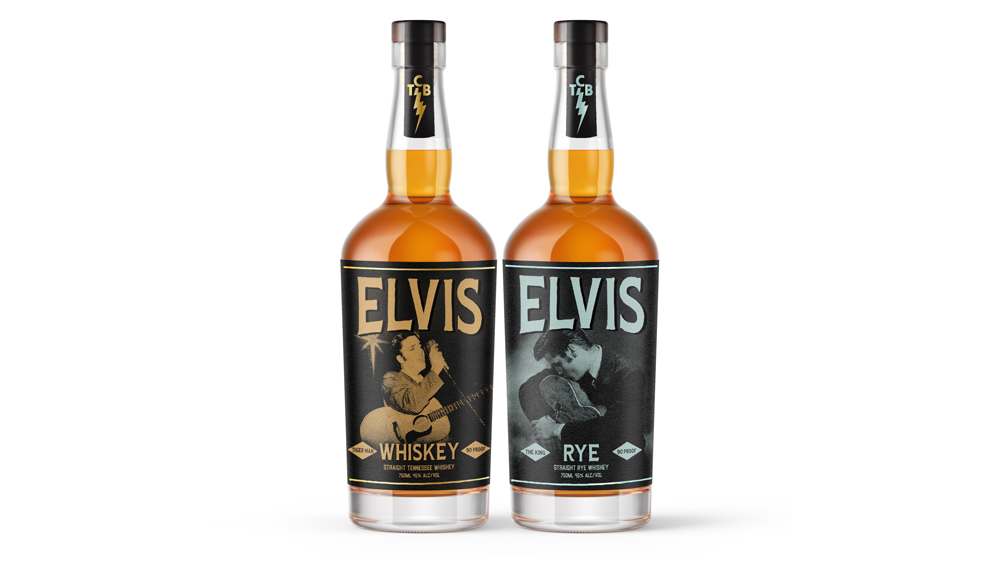 In our currently oversaturated market of celebrity-affiliated spirits brands, some are now turning to revered icons who are no longer with us in the physical realm. Enter this pair of American whiskeys, the result of a partnership between Grain & Barrel Spirits and Elvis Presley Enterprises, the entity that manages the King’s estate. Grain & Barrel is the South Carolina-based company that has previously released Chicken Cock Whiskey, Virgil Kane and Dixie Vodka, the official vodka of NASCAR that has stuck with its problematic name (no plans to change it though, according to this statement from Grain & Barrel founder Matty Antilla).

So what exactly do we have here? These are sourced whiskeys, a rye and Tennessee whiskey specifically, that are blended by “a team of experts” and bottled in Tennessee—partially as a callback to Elvis’ home, and partially a function of efficiency. The rye is distilled at MGP in Indiana, which seems to be the obvious choice as so many brands get their rye from that massive distillery. The Tennessee straight whiskey’s source is undisclosed, but it does say it was distilled in Columbia, Tenn. making Tennessee Distilling a likely source.

The Tennessee whiskey is called Tiger Man, a reference to one of Elvis’ nicknames, and is bottled at 90 proof. The mash bill is listed as 80 percent corn, 10 percent rye, and 10 percent malted barley, and given its designation it must have been charcoal filtered before barreling, also known as the Lincoln County Process. The nose is a bit thin and sharp, although there is some spice and fresh apple on the palate along with a touch of nuttiness and vanilla. The rye, also 90 proof, is called The King for obvious reasons, and is made from MGP’s 95 percent rye mashbill. The nose is peppery and spicy, followed by notes of chocolate, espresso and stone fruit on the palate. Both read as whiskeys on the younger side, but this is just a guess as no age statement is given.

So here we have two new sourced whiskeys that cost $50 each with a nicely designed label featuring Elvis in his prime (dad bod Elvis would have been funnier, though). “TCB” is emblazoned on the neck label, a reference to the phrase “Taking care of business” used by Elvis and his Memphis Mafia. But to be honest, I’m struggling to find a reason to tell you why you should drink these whiskeys. They are fine, not badly made, just not terribly exciting or compelling in a world of so many other options. This is particularly true given the price—if you’re going to spend 50 bucks on whiskey, there are some much better bottles to consider. Will this release appeal to the nexus of whiskey and Elvis fans that must be out there somewhere? That might be the case, but unless your curiosity is really driving you to try these, I’d recommend directing your hunk of burning whiskey love to other bottles.