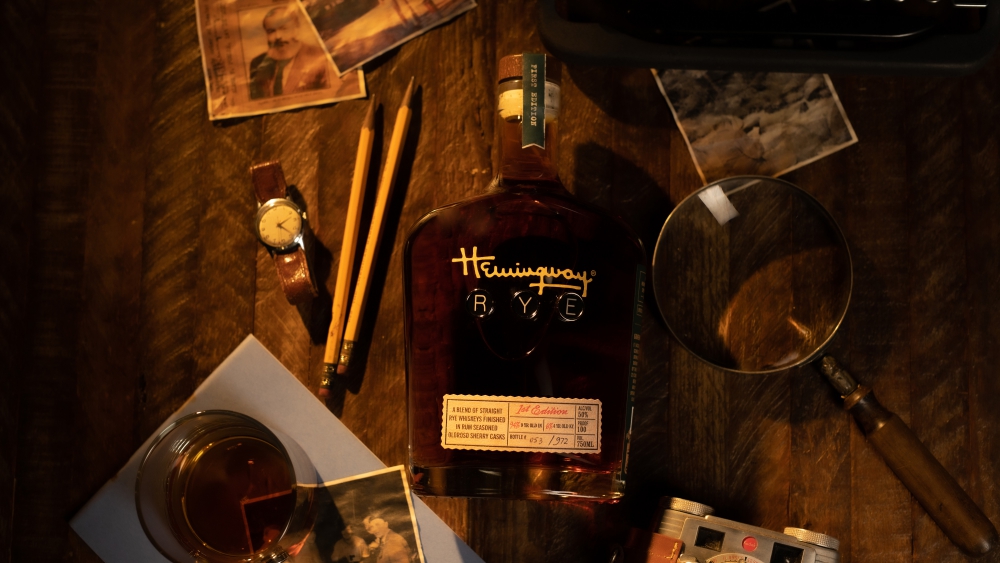 Papa’s Pilar, the Florida-based rum named after Ernest Hemingway’s boat, recently released a bottle as a tribute to his classic novel The Old Man and the Sea. Now there’s a limited-edition rye whiskey that also honors the iconic writer, and the people backing it are the some of the same ones behind the that rum.

Papa’s Pilar was started by Angel’s Envy co-founder Steve Groth, and master distiller Ron Call oversees blending and production with nearly a half century of experience behind him. The new Hemingway Whiskey Company is also led by Groth, and he has teamed up with two of his sons and three of the Call family—Ron, Jacob and Clayton—to source and produce this new rye whiskey, the inaugural release from the brand. The First Edition is a blend of straight rye whiskeys—94 percent nine-year-old rye from Indiana (presumably MGP) and six percent four-year-old rye from Kentucky that was distilled by Jacob Call. Both whiskeys were finished in Oloroso sherry casks that were previously used to finish Papa’s Pilar rum, adding layers of fruit and vanilla to the spice of the 100-proof rye.

“As an eighth-generation distiller and Kentuckian, I’ve had the chance to work with a variety of whiskey brands throughout my distilling career,” said Jacob Call in a statement. “But having the chance to work with my father and brother on our Hemingway Rye Whiskey has been a dream come true. Together, we have poured our hearts into this first edition blend, and we’re proud to share it.” Call made news last summer when he announced he was leaving his position at Green River Distillery, but he’s staying in state and according to the brand the rye will be produced at the new Western Kentucky Distillery when it opens next year.

We got to taste a sample of the whiskey and came away impressed. On the nose, this is classic rye with black pepper, fruit and some cedar aromas floating to the top. The cask finish, however, becomes readily evident on the palate, with layers of caramel, apple, cinnamon and even some banana that are buttressed by a healthy dose of raisin and vanilla.

There are less than 1,000 hand-numbered and signed bottles available of this inaugural release, which comes in a library-style box with a satin ribbon. A removable card can be found on the back, on which you are encouraged to write tasting notes or your own Hemingway-esque story. Bottles, priced at $149.99, are available for pre-order now from the brand’s website, but are selling out so act fast if you want to get yours.