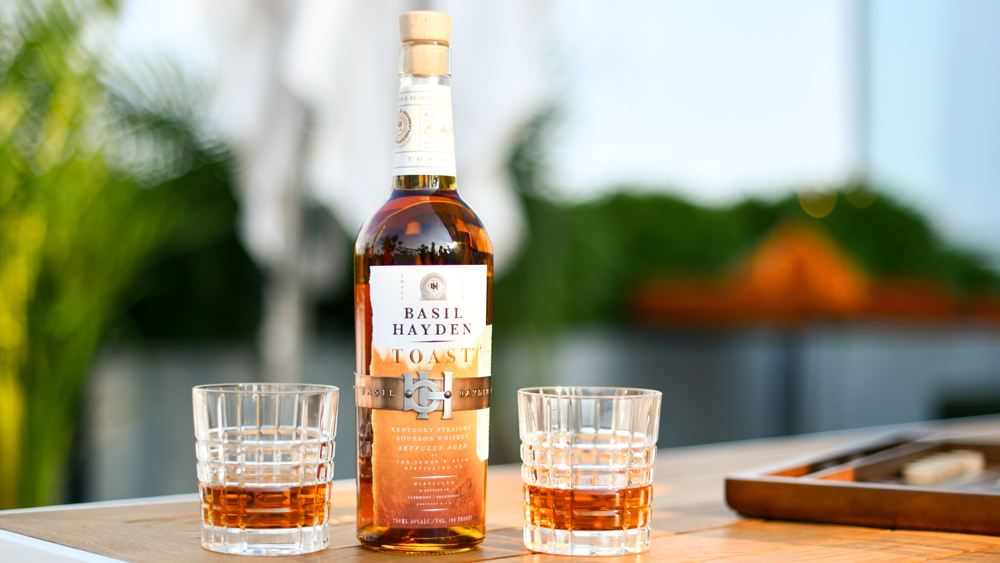 Basil Hayden, part of the Jim Beam Small Batch Collection since 1992, has long been familiar to whiskey fans for two main reasons. First, the bourbon is known for having a high rye mash bill, which means the percentage of that secondary flavoring grain is greater than in other bourbons (generally thought to be around the 30 percent mark, although the exact mash bill isn’t disclosed). The second reason is the fact that it’s bottled at 80 proof, which bourbon aficionados sometimes grumble about claiming that it’s just not strong enough to provide the heat and flavor they are looking for.

Well, that second point isn’t about to change anytime soon, and according to eighth generation Beam family distiller, Freddie Noe, that’s just the way things should be. “What I love about Basil Hayden is that it’s approachable and sessionable, yet layered with spice for a memorable sipping experience that’s unique from other bourbons on the market,” he told Robb Report. “For now, Basil Hayden will continue to be 80 proof across all releases.” In other words, the brand is a good entry point for newcomers to the category (although seasoned vets enjoy it as well), and it’s meant to be a more mellow drinking experience. So if you’re looking for a bigger punch, open up a bottle of Old Grand-Dad 114.

That familiar high-rye mash bill has been tinkered with, though, for this new permanent addition to the portfolio called Basil Hayden Toast. Instead of rye, the mash bill uses brown rice, which is meant to give the bourbon a sweeter palate, and a portion of it is put into toasted barrels for a secondary finishing period after initial maturation to “draw out notes of caramelized sugar and toasted wood,” according to the brand. This finished bourbon is then blended with brown rice bourbon that has been aged entirely in level four char barrels before bottling.

So why the change in recipe for this new release? “I love experimenting with different mash bills and have always thought a brown rice expression would be an exciting and fitting addition for a more approachable, inviting bourbon like Basil Hayden,” Noe said. It’s true, this is not the first time a brown rice bourbon has been released by Jim Beam. A few years back there was the Signature Craft Brown Rice Bourbon, part of the Harvest Bourbon Collection, and the most recent Little Book Chapter Four (also a Freddie Noe creation) incorporated brown rice bourbon into the blend. “Basil Hayden Toast and Little Book Chapter Four are crafted from the same brown rice bourbon stream,” he explained. “However, the crucial difference occurs when a portion of the bourbon is placed into a secondary toasted barrel and aged for approximately two months before being blended back with the remaining brown rice bourbon which has been rested in level four char barrels to create Toast.”

Indeed, this is a very different animal from regular Basil Hayden. Although there’s still a slightly spicy start to your sip, it’s nowhere near as noticeable as it is in the core bourbon. But this is quickly followed up by sweet vanilla and white chocolate notes, along with a bit of mint, some orange zest, French toast, and lots of that recognizable Jim Beam grain flavor underscored by cinnamon and Creamsicle. As expected, there’s almost no burn present on the finish.

Another change is afoot with the brand. As you may have noticed, I’ve referred to the it as “Basil Hayden” in the singular, not “Basil Hayden’s.” That change has officially been made to the entire portfolio, along with an updated label design featuring the monogrammed belt that’s meant to evoke the metal hoops on bourbon barrels.

As far as flavor goes, overall, it seems like Noe and the Beam team have achieved what they set out to create here—a softer, more approachable, less spicy bourbon that innovates while still remaining extremely user-friendly. Cue the groans from the whiskey snobs, but hey, there’s plenty of other bourbon out there to drink if you’re looking for something with a bit more alcoholic chutzpah.