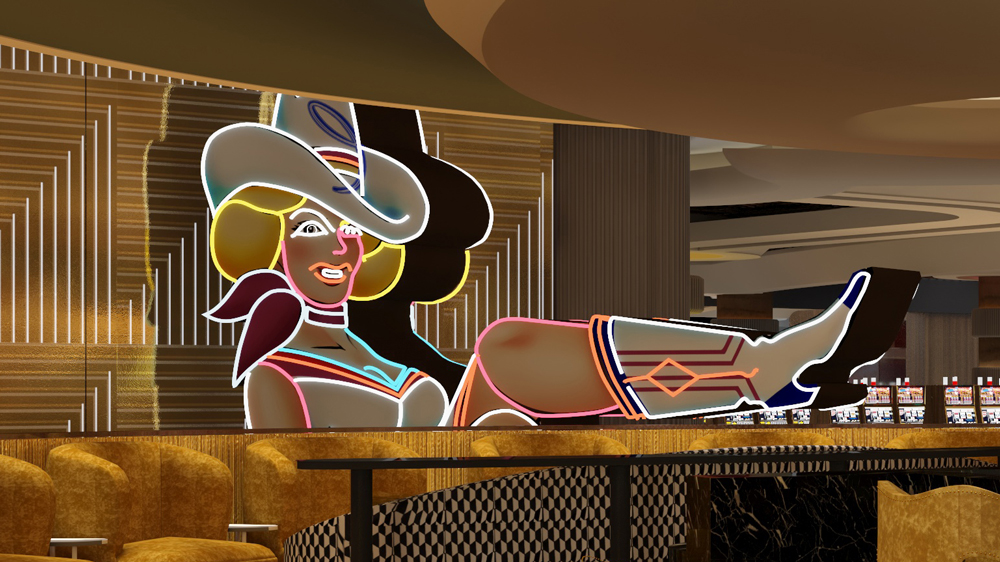 At the Vegas Vickie’s lobby bar inside Circa, the new-construction property developer Derek Stevens is creating in downtown Las Vegas, the centerpiece will be a neon kicking cowgirl known as Vegas Vickie. The iconic neon sign previously glowed above the downtown Glitter Gulch casino that turned into the Girls of Glitter Gulch strip club.

The bar will be part of Stevens plan to open the first five floors of the only 21-and-over casino-resort in Las Vegas on October 28. But don’t expect lap dances at Circa, which will offer a decidedly different kind of adults-only entertainment.

“I’ve had a lot of people ask,” said Stevens, who is the founder and CEO of Circa.” What does 21-and-over mean? Does it mean it’s triple-X or anything like that? No, there’s absolutely nothing like that. It just means you have to be 21 to get in. There’s nothing topless. It’s just an adult venue.”

Circa will have the world’s largest sportsbook (a three-level, stadium-style colossus where 1,000 people will be able to watch games on a 78-million-pixel high-definition screen), the 5,000-square-foot Stadium Swim amphitheater (with six pools, a 41-foot-tall LED screen and private cabanas) and a two-level casino (with 1,350 gaming machines and 49 tables).

“A lot of what we’re designing is oriented on people just coming to visit all these attractions,” says Stevens, who plans to open Circa’s 512 hotel rooms and suites in December. “We’re not leveraged to our hotel rooms. At Stadium Swim, we plan on doing 4,000 people a day. So obviously, we’re trying to attract more people than who’s staying at the hotel. A lot of what we’ve done is create these over-the-top venues that bring people to our property.”

Stevens, as you might have guessed by now, enjoys going to extremes. So his bar collection will include the longest indoor bar in Nevada, the largest outdoor bar on downtown’s Fremont Street Experience and a 35th-floor rooftop lounge at the city’s tallest hotel north of the Strip.

Here’s an exclusive first look at the bars that will be a major part of the over-the-top experience at Circa. All the bars, except for the rooftop Legacy Club that will debut in December, are scheduled to open October 28.

The bar takes it’s name from the famed neon sculpture.  Photo: courtesy Circa

This lobby cocktail lounge is designed for casual get-togethers, people-watching and Instagramming.

“With Vegas Vickie hanging in our three-story atrium, she’s going to have an awful lot of people coming in who want to take a picture,” Stevens says.

A rooftop bar with a great view of the Strip.  Photo: courtesy Circa

Located more than 400 feet above downtown, this rooftop cocktail lounge will offer panoramic views that will be most dramatic when the sun sets. This is an indoor/outdoor bar with fire pits, so it will be open 365 days a year for cocktails, champagne and bottle service “with a cool music vibe” but without any DJs dropping beats.

Legacy Club will sell “sunset packages” for guests who want to see day turn into night over the mountains while Las Vegas and the Strip “electrify right before your eyes.” It’s sort of like how the best views of New York City are in Hoboken. Legacy Club is located far enough away from the Strip where you can see all of the lights.

For a different kind of glow, the bar has a 10-foot display of 1,000 ounces in gold. The cocktail menu will include a section with “build-your-own” Old Fashioneds as well as the signature Desert Sunset martini, which aims to refresh with its combination of Portobello Road gin, Cointreau, fresh lemon sour, white peach puree and Gambino prosecco.

A sizable assortment of beer.  Photo: courtesy Circa

The idea for Mega Bar was born after Stevens saw the success of the 100-foot-long Longbar at The D, the downtown casino-resort he debuted in 2012 after renovating and rebranding what was previously known as Fitzgeralds.

“With Circa, we had more of a clean slate,” Stevens said. “We were able to design an exceptionally long bar. There’s been so many people that have enjoyed their time at Longbar that we wanted to create a new elevated experience.”

“We have all the high-volume beer brands, but we also wanted to provide a broad range of IPAs and other types of beers,” Stevens said.

Named for the old Tiger Stadium in Detroit.  Photo: courtesy Circa

At Circa’s sportsbook, there will be a section on the top floor that overhangs the action. It’s a nod to Tiger Stadium, the now demolished baseball venue that Stevens, a Detroit native, fondly remembers.

“What was unique about Tiger Stadium was a section of right field where there was an overhang,” he says. “You could hit a long fly ball and it could be a home room if it caught the overhang. As a kid, I spent a lot of time over there. What was so great about those seats is they were actually above the field of play.”

So Circa has created a sportsbook overhang where casino hosts will be able to put VIP guests who want to play slots on the ledge while watching all the sporting events they’ve wagered on. Meanwhile, the high-volume Overhang Bar behind the slots will accommodate large groups with private seating areas.

Guests will be able to place bets on Circa’s mobile app, so they won’t have to worry about standing in line to cash a ticket when their long-shot parlay hits. Betting on a phone also makes it easy to make multiple in-game wagers, all without ever having to leave your seat at the bar.

The longest outdoor bar on downtown’s Fremont Street Experience will feature 24 flavors of frozen cocktails. There will also be flair bartenders tossing bottles around, in front of a backlit blue-glass wall.

“I’ve kind of come full circle here,” said Stevens, who purchased a stake in the nearby Golden Gate casino-hotel in 2006. “Directly across Fremont Street is the Golden Gate’s OneBar. The Golden Gate is the oldest casino in Vegas. The address is 1 Fremont. For Circa Bar, we took everything we learned from OneBar and The D’s outside bar and made it bigger and longer and with a lot more drink options. It’s kind of cool that it’s directly across from where we started this whole bar business.”

Circa Bar guests will be able to watch live music and light shows on the Fremont Street Experience while eating Carolina-style smoked meat from Circa’s Project BBQ. Project BBQ, run by local food-truck chef Rex Bernales, will be one of five restaurants at the resort.

Circa is actually opening ahead of schedule. The original plan was that everything would be ready in December. But things sped up for Circa during the Covid-19 pandemic.

Construction is considered an essential business in Nevada. And with the temporary closure of casinos, Circa’s construction team was able to add additional work hours without worrying about disturbing any guests in nearby resorts.

Stevens obviously knows that this is a challenging time to open anything. He originally had plans for 777 hotel rooms and suites, but he’s shelling some floors and taking a year to see what demand is like. He fully understands that he might have to factor in social distancing when he opens his bars, restaurants and other spaces. But he’s still planning to make things as over-the-top as possible.

“Realize that we’re in the last three months of a 4½-year project,” Stevens said. “I’m not going to start deviating too much. If we have to open up with some limited capacity, we’ll make some adjustments. But it doesn’t mean we’re going to fundamentally change the design of what we’re doing.”