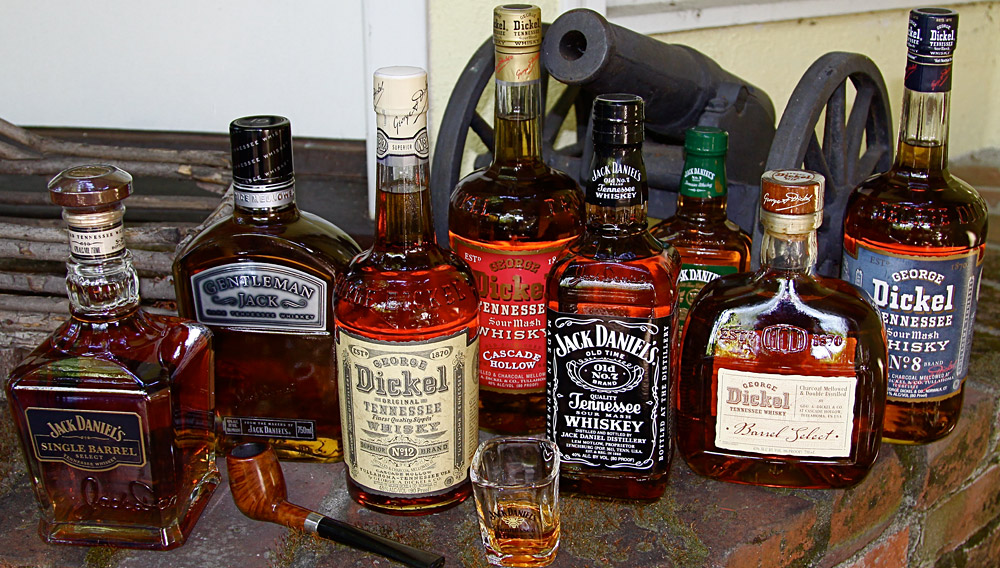 Too often when a bartender is asked which bourbons his or her bar carries, the list invariably includes Jack Daniel’s sour-mash Tennessee whiskey. But as most residents of the Volunteer State know, Tennessee whiskey is an entirely different libation from bourbon, even though they share many traits. Bourbon must be made in the United States, but contrary to popular belief, it can be made anywhere in the country. It is by a unique combination of history and geography that 95 percent of all bourbon is now made in Kentucky—the Civil War, the realignment of state boundaries, and the proximity of waterways are among the reasons.

To create Tennessee whiskey, after distillation and before aging in barrels, the distillate is trickled through a steep layer (in the case of Jack Daniel’s, a 10-foot column) of carefully prepared and selected charcoal made by burning sugar-maple wood. This process is called “mellowing” and sometimes, as in the case of Jack Daniel’s, it can take four to six days for the whiskey to trickle all the way down through the charcoal. The charcoal filtration method is officially known as the Lincoln County Process, named after Lincoln County, Tenn., where the Jack Daniel’s distillery first used it. (Ironically, in 1871 the county’s boundaries were changed, which put Jack Daniel’s distillery in Moore County, an area in which, even today, alcohol cannot be served). This charcoal mellowing is what gives Tennessee whiskey its distinctive rich, sweet taste. There is also another, less obvious but still important factor in Tennessee whiskey—the pure water used in the distillation process.

Jack Daniel’s is famous for its iron-free, naturally filtered limestone water (you can even buy bottles of it at the distillery), which is sourced from a limestone cave where it bubbles out at 400 to 500 gallons a minute at a constant 56 degrees Fahrenheit. George Dickel, on the other hand, is still made with the same Cascade Spring water that the company’s founder, George Dickel, used in 1870 when he built his distillery in Cascade Hollow. Although Prohibition shut down the George Dickel distillery in 1910 (Tennessee embraced the prohibitionist’s creed in 1909—10 years before the rest of the country), when the distillery was rebuilt in 1958 it was relocated on the banks of Cascade Creek, a half mile from Dickel’s original site, so that the same Cascade Spring water could be used.

To be sure, Jack Daniel’s and George Dickel are the only two major distillers of Tennessee whiskey (although George Dickel always spelled the name of his whiskey without an “e,” in the Scottish style, as he felt his distillation was equal to the finest scotch). The only other Tennessee whiskey of note is the lesser-known Benjamin Prichard’s Tennessee Whiskey. Although Prichard’s is currently the only distillery located in Lincoln County, it does not use the Lincoln County Process of charcoal filtering. While some may hold that this, then, makes it not a true Tennessee whiskey, the legislature of Tennessee begs to differ. On May 13, 2013, Governor Bill Haslam signed House Bill 1084 stipulating that maple-charcoal filtering was to be used for all spirits labeling themselves “Tennessee Whiskey”—with an exception for Benjamin Prichard’s. Nonetheless, Prichard’s, using a recipe similar to an old family one from the 1820s, still resorts to aging its whiskey in barrels with 3 mm of char. Thus, when it comes to Tennessee whiskey, no matter the distillery, there can be no mistaking that mellow, honeyed undertaste that gives it such distinct character.