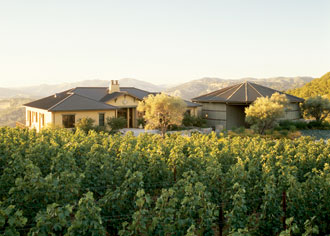 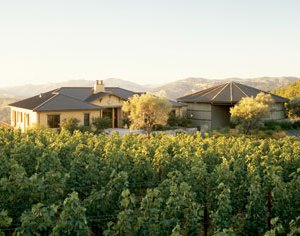 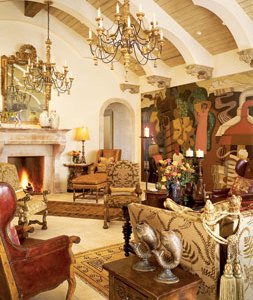 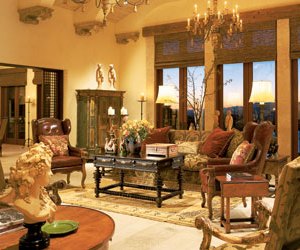 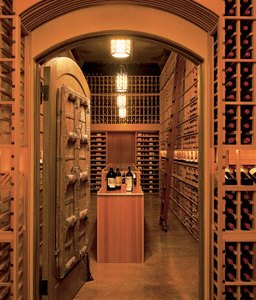 Terroir, like so many other French words, does not lend itself to direct English translation. Succinctly put, it describes the “placeness” of a thing: the influences of environment—of air and soil, wind and seasons—upon that object’s character, substance, and quality, each of which is shaped by a kind of vicinal tropism. It is the essence of place expressed in the being of that object. And though the term applies most correctly to the yield of the earth (fruits, vegetables, cheese, and, most especially, wines), this intangible process can mold buildings, too, as Ann Colgin has discovered.

Since her arrival in Napa Valley in the late 1980s, the proprietor of Colgin Cellars, maker of several of Napa Valley’s finest wines, has studied the nuances of the area’s intricate geology—its marbling of clay, sand, and rock, its slopes and valleys—and the subtle and sometimes dramatic shifts of flavor and texture these attributes effect on the output of the vines. Initially, she purchased all of her grapes from grower Herb Lamb, whose name, as a result, graces the bottle of one of the most beautiful (and rare) Cabernets to be coaxed from California’s generous climate. Not until 1996, when she acquired just less than 5 acres on Tychson Hill in the town of St. Helena, did she own her own vineyard. And it was then that she began her study not just of the terroir of grapes, but of architecture as well.

“There was this dilapidated house on the property when I bought it,” Colgin recalls. “It had belonged to a woman called Josephine Tychson. She and her husband had moved to Napa in the 1880s, planted grapes, and built this little house. They would sit around the kitchen table in this cottage drawing pictures of a winery that they wanted to build.” An antiquarian and art expert who continues to consult with Sotheby’s, Colgin, who possesses a strong sense of the past, perceived at once the parallels between the Tychsons’ venture and that of her husband, Joe Wender, an advisory director at Goldman Sachs & Co., and herself. “I conceived a romantic dream of reinvigorating that house,” she admits.

To fulfill this vision, she first hired an architect and a contractor; then she phoned renowned Los Angeles designers Illya Hendrix and Thomas Allardyce, who had done her home in Bel Air, asking them to create interiors that, though adapted to 21st-century living, would remain consistent with the Victorian vernacular of Mrs. Tychson’s era.

Ann Colgin recalls that when the 18th-century Burgundian fireplace surround that dominates the great room arrived, she, Thomas Allardyce, and his team spent hours reconstructing it like an enormous stone jigsaw puzzle. The room itself was designed around the 1939 WPA mural depicting California vineyard workers, which Colgin purchased from a dealer in Los Angeles.

The parallel between Colgin’s new life in Napa and that of the Tychsons did not end here, however. Like their predecessors, Ann and her husband—frustrated by the many challenges of producing their wines in leased facilities—also dreamed of owning a winery. During the same period, they acquired a property that had belonged to the Long family of David Arthur vineyards. The site, which they renamed Colgin No. 9 (“A lucky number for us,” Colgin says), overlooked Lake Hennessy on Pritchard Hill. Despite their new property’s remote mountaintop location (the several miles of road leading to its summit twist and turn more often than the Texas sidewinders of Colgin’s home state), the couple finally determined to build a winery there that could function not just as a production hub for their winemaking operations, but as a workplace, an entertainment venue, and, during the harvest season, a residence.

While crews stripped away chaparral and rock to plant No. 9, draftsmen and contractors labored under the direction of Colgin and her winemaker, Mark Aubert, in creating a state-of-the-art, gravity-flow facility. “We wanted a layout that would enable us to do even more hand sorting and pay even more attention to detail,” she notes. “We wanted to have more control over the process. By building this building, we were trying to make what we consider great wine even better.”

This single-minded emphasis carried over into the appearance of the winery, which is rounded, like a barrel, and which connects to a U-shaped executive office and residence wing that bears the gracefully symmetric lines of a Mediterranean villa. In the latter, Colgin’s guiding principle was the integration of the winemaker’s craft with its context: the land. “We wanted to combine the grand view of the lake with the intimate views of the vineyards,” she explains. “And we wanted the space to achieve a sophisticated elegance that reflects the quality of the wines. They are a handcrafted, luscious, sensual, and vibrant product. You can look at our label, and it’s simple; but it has a great amount of sophistication to it.”

Achieving this fragile balance in so large a space required no mean talent. Hendrix and Allardyce were brought to the site early on to discuss the development of the project. “The practical essence of what they [Colgin and Wender] were trying to achieve was primarily to use the building as a residence during harvest and also as a residence for visiting guests,” says Allardyce. “But we also saw a very noble space. While the winery is decidedly Californian in spirit, it also suggests a medieval castle. The space is extremely romantic.”

Hendrix and Allardyce decided that Colgin’s “sophisticated elegance” could be best realized by accentuating the inherent romance of the property’s terroir. Throughout the interior architecture, they incorporated reclaimed antique beams from a Canadian barn that not only express function, but enhance the parchment-colored plaster on the walls, which in turn cast a pleasing candlelight glow off the natural French limestone floors. “We used rugged construction materials, stone, the old beams,” says Allardyce. “These are in juxtaposition to the more highly finished furnishings of various periods and styles. We’ve incorporated a blend of French, Italian, Portuguese, and a smattering of Asian, which really is a foil for the very sophisticated art that they collected for the space.”

This art informs the ambience of the winery every bit as much as does Colgin’s other professional passion. Indeed, the two frequently overlap: In the chapel-like entry hall, opposite iron filigree doors flanked by altar candlesticks converted into lamps, hangs an enormous canvas by Hudson River school painter Thomas Hill—one of only two Napa Valley landscapes that he executed on his travels to the region in the 1860s. Two Romanesque arches lead from there to the great room, where a 1939 WPA mural of California vineyard workers vies for the visitor’s attention with a majestic view of the lake, as seen from the wraparound balcony. The sizable dining room, connected to the great room by yet another arch, contrasts intimate glimpses of the No. 9 vineyard with the grander spectacle of the mountains. Hanging on the walls above the antique dining table, whose eight leaves enable it to expand to accommodate 20 guests, Allegory of the Four Seasons, a series of 18th-century French oils painted by Hyacinthe Collin de Vermont, alludes once again to the agricultural theme. In one of the dark-paneled offices, a collection of vintage black-and-white photographs of Burgundy pays tribute to Joe Wender’s oenological tastes. “My husband is especially a big Burgundy lover,” Colgin confesses. “So they’re very appropriate for his office.”

A hall leads from the offices to several sumptuously appointed bedrooms. At the end of this corridor, a stairwell worthy of the Castel Sant’Angelo descends to the darkened heart of the structure: the wine cellar. Behind a studded antique Indonesian door lies a trove of Colgin wines, including 60 cedar boxes containing verticals of the first six vintages, from 1992 to 1997. As if this were not sufficient temptation to undo even the most self-possessed of oenophiles, beyond yet another door lies a further suggestion of Gothic romance, Colgin and Wender’s personal sanctum sanctorum: a hidden cellar containing a cache of extremely rare vintages of Burgundies, Bordeaux, Rhône wines, and Rieslings.

“Every great wine should surprise us,” insists Colgin of her cellar, “and so should a house.” This sense of fun, combined with the warmth and comfort derived from sharing it, defines for her the spirit—the terroir, if you will—of both the winery and its wines. Just as one wants to taste Cabernet developing in the glass, she observes, one also wishes to wander from room to room to discover and revisit the varied art and furnishings contained in each. But, she cautions, the elements must be in balance; excess for its own sake receives no quarter. “Everything here,” she notes, “was purchased over time with a great sense of place and affection. We didn’t go about doing this by simply saying, ‘Give us a style.’ It was much more carefully contemplated than that.”