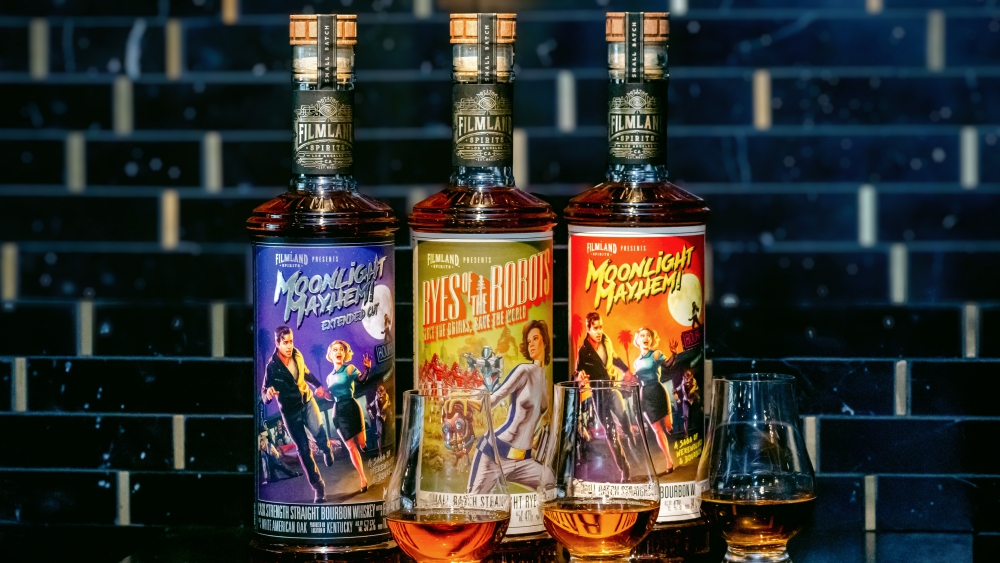 Film nerds and whiskey nerds are both extremely opinionated about subjects that are ultimately entirely subjective and based on personal taste. So it kind of makes sense to bring the two worlds together, as Filmland Spirits has done with a trio of retro B-movie-inspired bottles.

Filmland was founded in 2020 in California by a group that was equally as inspired by whiskey as it was by movies. And this fall three new American whiskey expressions have finally arrived (the source of the liquid is, as usual, undisclosed), with the slightly too cute tagline “A Blockbuster in Every Bottle.” According to the brand, the inspiration for the liquid really starts with a filmic concept. First the team comes up with an idea for a retro B-movie; then this is turned into a script with monsters, heroes and villains (presumably not feature length, but you can snippets and even a trailer on the brand’s website); finally a schlocky movie poster is created which becomes the label of these eye-catching bottles.

As usual, the design and backstory might be the most interesting and evocative you’ve heard or seen, but the details of the whiskey are equally (or more) important. So let’s take a look at what Filmland is working with here. The bourbon is called “Moonlight Mayhem!”, a straight whiskey aged in new American oak for a minimum of four years and bottled at 94 proof with a mash bill of 75 percent corn, 21 percent rye and 4 percent malted barley. The story behind this bottle is a Romeo and Juliet-inspired tale in which werewolves rule the world, leaving the fate of a mixed-monster couple up in the air due to their disapproving families. There’s also “Moonlight Mayhem! – Extended Cut,” a cask-strength version of the bourbon. This is the same whiskey but bottled at 115 proof, and the werewolf saga for this bottle contains some deleted scenes. Finally, there’s “Ryes of the Robots,” a rye whiskey (95 pecent rye, 5 pecent malted barley) also aged for at least four years and bottled at 94 proof. The backstory here brings Terminator to mind, taking place in the aftermath of the Automation Wars of 3050 when a bartender has to fight off an army of robot mixologists (this actually seems kind of feasible).

The Filmland whiskeys have already received glowing reviews, with each of them earning medals at this year’s San Francisco World’s Spirits Competition, with two of them—the rye and cask-strength bourbon—taking home gold.

The prices for these bottles are $55 for the bourbon, $60 for the rye and $80 for the cask strength, and they are available for presale at the Filmland website and will be on Reserve Bar starting September 15. This puts them in the higher end of sourced whiskey market, so you might not see many aspiring screenwriters/baristas reaching for these on the shelves of their local Hollywood Boulevard liquor store. But somebody send Quentin Tarantino and Robert Rodriguez a couple of bottles stat, because this seems like a whiskey aesthetic they would appreciate.