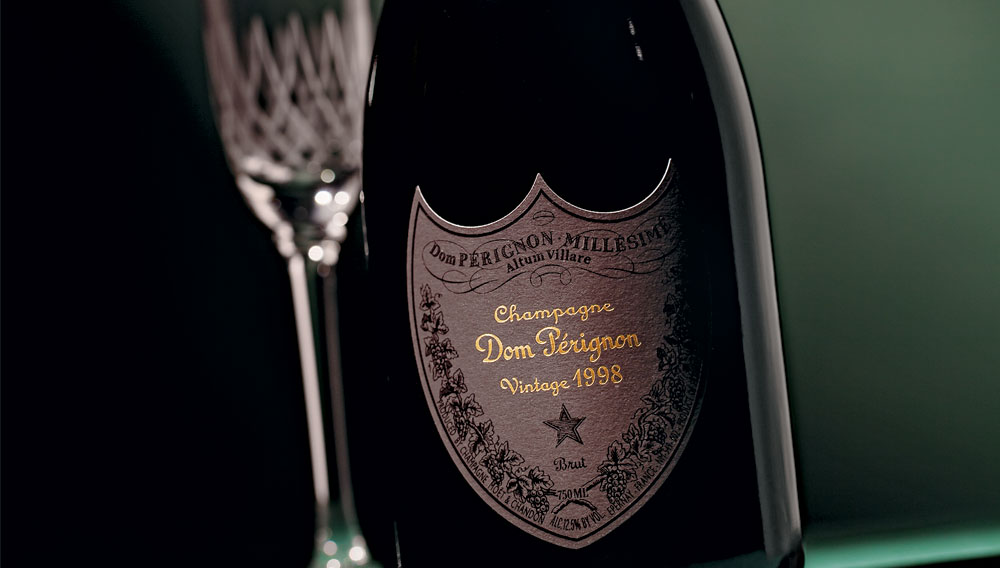 As half a dozen helicopters pass over an iron-hued ridge, a massive apron of ice appears among the deep clefts in the slopes of Eyjafjallajökull, an ice cap located at the southern tip of Iceland. Before this glacier, known as Gígjökull, clusters of wooden pyres burn steadily, their flames and smoke whipped into frenzied currents by the blades of the approaching aircraft. The choppers touch down and their passengers disembark, passing through smoky mists to enter what might well be a scene borrowed from the fiction of Ian Fleming. On a platform, mirrored cubes are arranged before a gleaming monolith that looms above the grinning figure of a man dressed entirely in black. “Bienvenue,” says Richard Geoffroy, chef de cave of Dom Pérignon. “Welcome.”

Happily, the passengers have not been unwittingly diverted to this stark place for some nefarious purpose; instead, waiters offer them chilled glasses of Dom Pérignon P2-1998, the first example of the house’s Plénitude Deuxième, or P2, a range of vintages that have been aged nearly twice as long as the initial release. The wine’s first plénitude, or peak, arrived seven years after the 1998 harvest, Geoffroy explains, but the portion of the vintage marked for the P2 program remained on lees in the house’s cellar seven years longer, gathering force and nuance.

Plénitude is an apt term, for the P2-1998, priced at $375 per bottle, is nothing if not generous. Bottled in 1999 and disgorged in 2012, its aromas of black cherry, smoke, and sea brine almost overwhelm the nose, while on the palate, the tension between its penetrating seashell-like minerality and seductively soft, creamy texture seems to propel the finish to startling lengths.

“P2,” says Geoffroy, “projects light and energy”—elements that guided the decision to introduce the wine in Iceland. “This country is about opposites, dualities. It’s about the black, the white, the visible, the invisible, and the ice, the fire. All of these contrasts seem to merge into an element of harmony. Harmony, like P2, is not static; harmony is dynamic.”

Still, all of this beauty comes at the expense of the first release of each vintage, as the house holds more wine back for this program, which replaces its Oenothèque line. Yet collectors can anticipate the eventual release of the first wines in their third plénitude, which occurs more than 20 years after harvest. “P3 is not the final destination,” notes Geoffroy. “[The wine] will keep improving very well for decades and decades. But,” he warns, “there is no P4.”