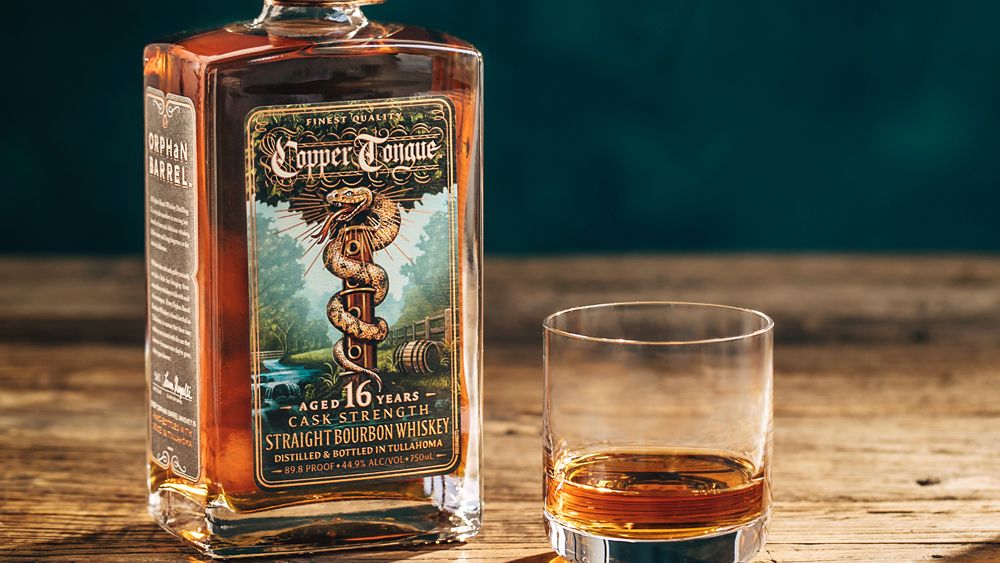 Since she took over as general manager and distiller at Cascade Hollow Distilling Co., which produces the venerable George Dickel brand, Nicole Austin has become one of the superstars of Tennessee whiskey, prompting a reevaluation of the entire category. Her first project, a 13-year-old bottled-in-bond Dickel expression, was awarded Whisky Advocate’s Whisky of the Year in 2019, and its two follow-ups have gotten similarly rapturous acclaim. She’s also found success with her Cascade Moon series of limited-edition aged whiskeys, launched last year. Now, yet another high-profile project is calling on her talents.

Diageo’s Orphan Barrel line has tapped Austin for Copper Tongue, a one-time-only release of a 16-year-old, cask-strength Tennessee bourbon. Austin’s reputation doesn’t need burnishing at this point, but Orphan Barrel could definitely benefit from her credibility.

Diageo launched Orphan Barrel with much fanfare in 2013, proclaiming it “a new project determined to locate lost and forgotten barrels of whiskey from around the world” in its initial press release. The claim immediately drew derision from a fair share of whiskey obsessives, who knew that even a corporate behemoth like Diageo doesn’t “lose” or “forget” barrels, thanks to its sophisticated computer tracking system. These were more oddball lots for which Diageo needed to find a suitable home. The lack of details about the whiskeys’ provenance, coupled with high list prices, further frustrated serious collectors. But the biggest problem was that a lot of Orphan Barrel releases just weren’t very good. Finding a 20-year-old bourbon that isn’t over oaked is a remarkable feat, and while Orphan Barrel did have some successes, more often than not the prices (generally about $150 to $200 a bottle) reflected the age statements and attractive packaging rather than the quality of the whiskey.

Diageo doesn’t disclose sales figures for Orphan Barrel, but it has clearly done well enough to still be a going concern almost a decade after its launch. The program has branched out beyond its American whiskey beginnings to encompass Diageo’s massive holdings in Canadian and Scotch whiskey too. And with each release the company has become more transparent with details behind the whiskey. But reviews have generally remained fair to middling, and the brand has grown to seem more like an afterthought in recent years. Prices have increased somewhat for early bottlings, but they’re still easy enough to find, both on the secondary market and at retail. So could Copper Tongue mark a reset for the Orphan Barrel brand?

Based on the liquid alone, the answer is a resounding “yes.” This is the best Orphan Barrel in recent memory, and further proof that Austin really knows what she’s doing when it comes to picking aged whiskey. Copper Tongue (named in homage to the copperhead snakes that roam near the distillery) is a blend of two separate 16-year-old lots. “One lot completely stepped away from all the stereotypes [of aged whiskey],” Austin says. “It was very light and sophisticated, totally drinkable at cask strength. And the other one, it was very balanced, but to me it had that structure that tells you, I am drinking an old whiskey. I think blending the two was the right choice, because the ultimate product was more balanced and complex.”

Copper Tongue may be bottled at cask strength, but the proof is a surprisingly low 44.9 percent ABV. That’s the case for a few different reasons. Many Cascade Hollow whiskeys are put into the barrel at a lower proof than most other large distilleries—57.5 percent ABV instead of 62.5 percent. They’re aged in single-story rickhouses, whereas higher-proof whiskeys are usually aged on higher floors of multi-story buildings. The climate in Tullahoma, TN, where Cascade Hollow is located, is also marginally more temperate than Kentucky. Austin notes, “All of those factors are working in our favor for us being able to hit these pretty high ages for an American whiskey.”

This Orphan Barrel release outperforms its siblings before it.  Photo: courtesy Diageo

By the time an American whiskey hits its teens, three flavors usually predominate: vanilla, caramel, and oak. Copper Tongue breaks the mold, with a nose and palate heavy on Bananas Foster, citrus and instead of an oaky spice, what Austin describes as “almost like cedar, like juicy wood.” It doesn’t taste like a typical Dickel whiskey, it doesn’t taste like it’s cask strength and it definitely doesn’t taste its age. Copper Tongue is an outlier in all the best ways.

Dickel and Cascade Moon bottlings are both called “whisky” (without the “e”), but both Diageo and Austin wanted to make a point of labeling Copper Tongue as a bourbon. While Tennessee whiskeys (or whiskies) like Dickel and Jack Daniel’s distinguish themselves by their use of maple charcoal filtration after distillation and before aging (known as the Lincoln County Process), they are technically and legally bourbons. “Some of the real whiskey lovers pass over Tennessee whiskey a lot,” Austin notes, “and I think there’s a real misunderstanding about Tennessee whiskey as a category. Even when I thought of myself as a real whiskey expert, I didn’t really understand Tennessee whiskey as a category, or even know what the rules were. So I’ve been out evangelizing for years.  Something I’ve done with [DIckel’s] Bottled-in-Bond was really try to show people and make the point about how exceptional this distillery is, and how much its liquids should be considered part of the great American bourbon tradition. Orphan Barrel was an opportunity to step even further down that path.”

For Orphan Barrel cynics, now’s the time to hop on board, at least temporarily. One of the most affordable releases in the brand’s history, Copper Tongue is priced $100 a bottle—still a lot pricier than the $45 suggested retail price for Dickel’s new 2007 Bottled in Bond whiskey. But Copper Tongue is quite a different whiskey, so it’s not like the extra cost is solely for different packaging. And $100 for a limited edition 16-year-old cask strength bourbon (Diageo isn’t saying just how limited) is, all things considered, quite reasonable nowadays. But whether this marks the beginning of great things for Orphan Barrel or an exception to the rule, Copper Tongue is worth searching out when Diageo releases it next month.