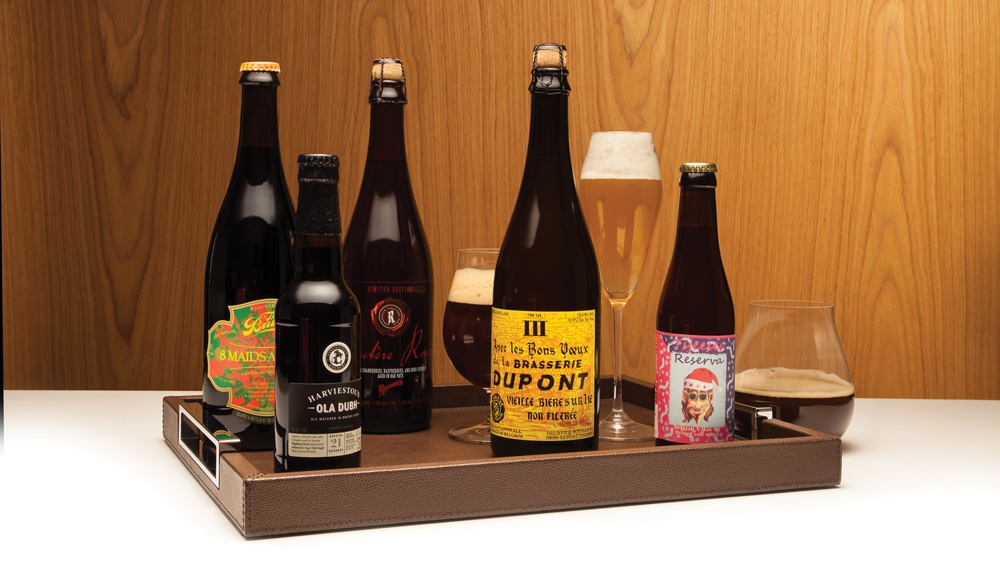 Raise your glass to these five spirit-lifting artisanal winter ales.

The holidays are indeed a time to rejoice—and the Avec les Bons Voeux de la Brasserie Dupont (French for “with the best wishes of the brewery”) is what Belgian beer aficionados drink to celebrate their New Year’s morning. With 9.5 percent ABV and a Champagne-like profile, it is also perfect for evening toasts. This celebration ale is a farmhouse-style blond saison that is bottle-conditioned to draw out its complex flavors. The nose is redolent of ripe pears and dried apricots, with a hint of lemongrass. The beer is dry-hopped—meaning that an additional flight of hops is added after the initial fermentation—which gives it pronounced bitter notes on the palate that beautifully complement flavors of grapefruit and banana. This beer is the ideal holiday hair of the dog. brasserie-dupont.com ($11.50 / 750 mL)

The eighth release in the Southern California brewer’s 12 Days of Christmas series, the Bruery 8 Maids-A-Milking is a Belgian-style imperial milk stout that is a thick and delicious dessert unto itself. Compared to typical dry stouts, this beer is rich and vibrant, made with dark-roasted specialty malts and nonfermentable lactose added for a sweet finish. The nose is rich with scents of vanilla bean and roasted pecans.

The palate is incredibly well balanced, and the beer is not nearly as heavy as its 11.3 percent ABV suggests. Flavors of chocolate, cinnamon, and coffee precede notes of figs, raisins, and plums, with a long, creamy finish. thebruery.com ($12 / 750 mL)

The annual holiday release from Belgium’s boutique De Struise brewery starts as a strong winter blond ale. Adding an array of fruits and spices to the brew yields a complex 10 percent ABV beer intended to warm the holiday spirits. The 2011 release of the De Struise Tsjeeses Reserva is amber in color with a frothy, cream-colored head. The malty nose offers the strong phenols of Belgian yeast and notes of butterscotch, pineapple, and hints of orange pompadour. Multifaceted and with a syrupy mouthfeel, the beer has an initially sweet palate of marmalade and fresh pastries, with a finish of baked yams, pepper, and clove. struise.com ($9 / 330 mL)

Developed in collaboration with the Belgian brewery Rodenbach (known for its Flemish red ales) and the two Michelin–starred chef Viki Geunes, the Rodenbach Caractère Rouge pairs exquisitely with hearty holiday meals, such as slow-roasted turkey or honey-baked ham. The red ale’s cider-like profile is the result of macerating the beer, which has already aged in oak casks for two years, with fresh sour cherries, raspberries, and cranberries for six months, and then it referments in bottle. With a spritely nose of sour fruit and tangy lozenge, the beer is initially tart on the palate, which soon reveals a more complex earthiness, including notes of cinnamon and tobacco. rodenbach.be ($28 / 750 mL)