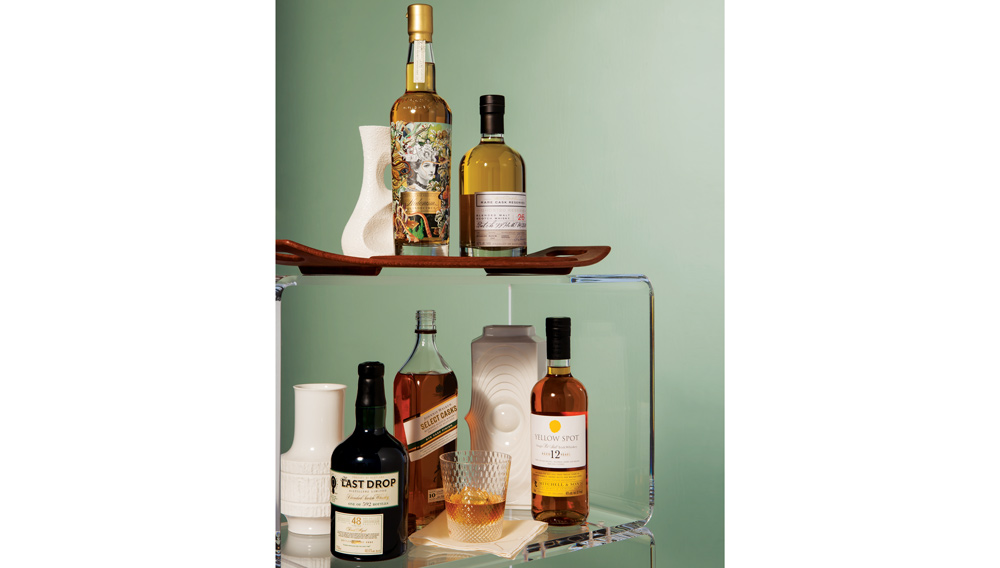 Fifteen years ago, spirits professional John Glaser left Johnnie Walker to establish an innovative Scotch whisky company, which he named Compass Box. In the years that followed, Glaser dedicated himself to sourcing and blending whiskies that were unique in composition and flavor. Compass Box’s first offering, Hedonism, was noteworthy for its blend of Scotch grain whiskies (as opposed to single malts). This year, to celebrate the company’s 15th anniversary, Glaser has released Hedonism Quindecimus, a blend of five separately aged grain whiskies, including 20- and 25-year-old examples that were distilled at Port Dundas, near Glasgow. These he combined with a 32-year-old whisky from Dumbarton distillery (which closed in 2002), a 20-year-old whisky from North British (one of the largest grain whisky producers in Scotland), and a 32-year-old pre-blended grain whisky sourced from Loch Lomond (an independent distillery in the Scottish Highlands). As one might expect, the resulting whisky is complex, with a musty aroma that transcends into a floral bouquet accented by notes of coconut, tropical fruits, and a touch of vanilla. ($175)

As proof of this blended whisky’s rarity, each wax-dipped, individually numbered bottle comes with a separate 1-ounce tasting sample, which allows the purchaser to savor a taste without compromising the integrity of the unopened bottle. Comprised of vintage single malt and grain whiskies, the youngest of which was distilled in 1965 (many are much older), this rare blend also features whiskies from distilleries that closed decades ago, including Brora in the Highlands and Rosebank in the Lowlands. Originally bottled as a 12-year-old blend during the late 1970s, this whisky was later recasked in ex-bourbon barrels and allowed to age for 36 more years, until 2014 when it was bottled as a 48-year-old. With flavors of marzipan, honey, tangy citrus, and the faintest whiff of smoke, this is one of those whiskies that can never be re-created. ($3,999)

In 2014, William Grant & Sons launched Rare Cask Reserves, a venture through which master blender Brian Kinsman has released (and will continue to release) limited-edition expressions made from William Grant & Sons’ stocks of vintage whisky casks that were sourced from now-defunct distilleries. Its latest offering, a 26-year-old blend of two single malts, features whiskies previously distilled at Ladyburn (which existed from 1963 to 1975) and Inverleven (which operated from 1938 to 1991). The result is an elegant combination of deep, oily, and oak-laden notes from the Ladyburn and a floral character from the Inverleven, which is laced with nuances of cherries and citrus. Of the total 4,100 bottles produced, the United States has been allocated the lion’s share at 2,000 bottles. ($400)

This new release is the first in a series of Johnnie Walker Select Casks, an annual collection of limited-edition Johnnie Walker blends distinguished by different barrel-aging finishes. The Johnnie Walker Rye Cask Finish whisky matured for 10 years in first-fill American oak barrels and was finished for an additional month in—you guessed it—repurposed rye whisky barrels made from American oak. The result is a dram that is top-heavy with notes of cinnamon and cedar, a touch of smoke, a subtle sweetness, and a familiar smoothness reminiscent of Johnnie Walker Black. At 92 proof, this limited blend is a medium-bodied whisky perfectly suited for a pour over ice. ($45)

The growing popularity of Irish whiskey has prompted the reintroduction of a famous brand from the past, Yellow Spot, which was born in Dublin in 1887 (by the Mitchell family of independent bottlers) but had disappeared from shelves by the late 1960s. Its reemergence is the handiwork of Midleton Distillery, which distills the spirit from a mash comprised of malted and unmalted barley using copper pot stills. The whiskey is then aged for 12 years in a combination of repurposed bourbon, sherry, and Malaga casks. The resulting whiskey offers up flavors of dried fruit and burned honey, with the faint presence of freshly grated nutmeg. ($100)