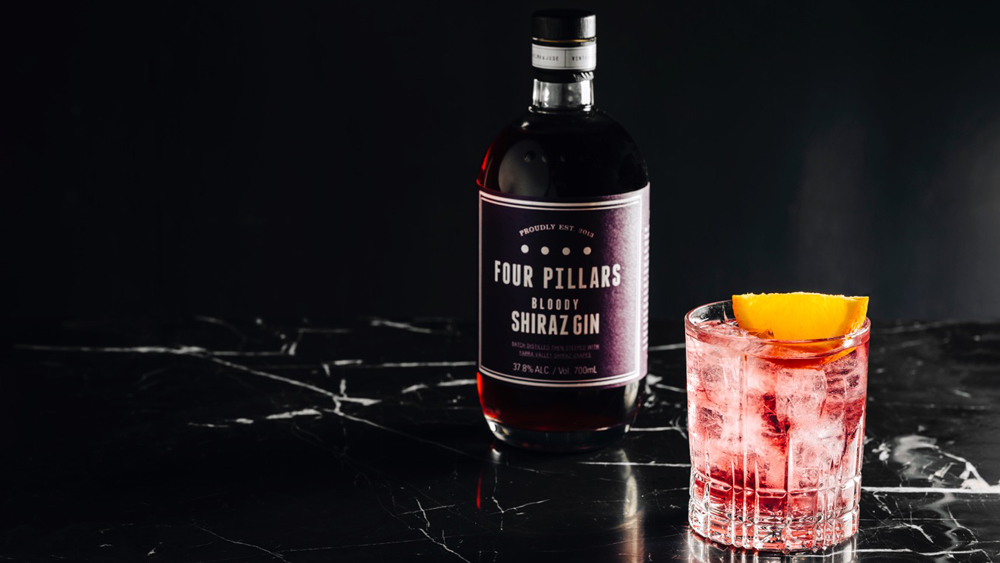 It used to be a safe assumption that all gin was clear. But then distillers began aging this juniper-centric spirit for brief periods in wine, whiskey, and even Cognac barrels to give it added flavor and—as a result—color. Now the Four Pillars distillery in Australia’s Yarra Valley—an area better known for its wines than its spirits—has taken this gin-embellishing concept a step further by macerating its dry-styled pot distilled gin with juices from the Yarra Valley’s finest Shiraz grapes. Appropriately christened Bloody Shiraz Gin ($40) this is a somewhat elusive small batch spirit that is made only once a year to coincide with the grape harvest.

Four Pillars—so-named because their distilling philosophy involves four elements: the copper pot still, water, their botanicals, and that ethereal element love—combines its Rare Dry Gin with de-stemmed but otherwise intact Yarra Valley Shiraz grapes. The Rare Dry Gin itself is unique, as it uses whole, fresh Australian oranges rather than the more traditional dried orange peels, in addition to nine other traditional and non-traditional botanicals, including Tasmanian pepperberry, lemon myrtle, and lavender.

The gin-and-grape steeping process takes approximately eight weeks, after which the now wine-dark gin is pressed out of the grapes. The rich fruit flavor of this spirit is balanced by the addition of slightly more gin, which brings the alcohol up to 75.6 proof—less than most gins made elsewhere, but with a noticeable spicy pine needle aroma and an abundance of citrus and lavender in the favor.

The 2017 bottling is the third vintage of Four Pillars Bloody Shiraz Gin, but the first to be imported to the United States. Each year’s release is slightly different, according to the vagaries of the harvest, but they always make for a uniquely flavorful – and colorful – dry martini.