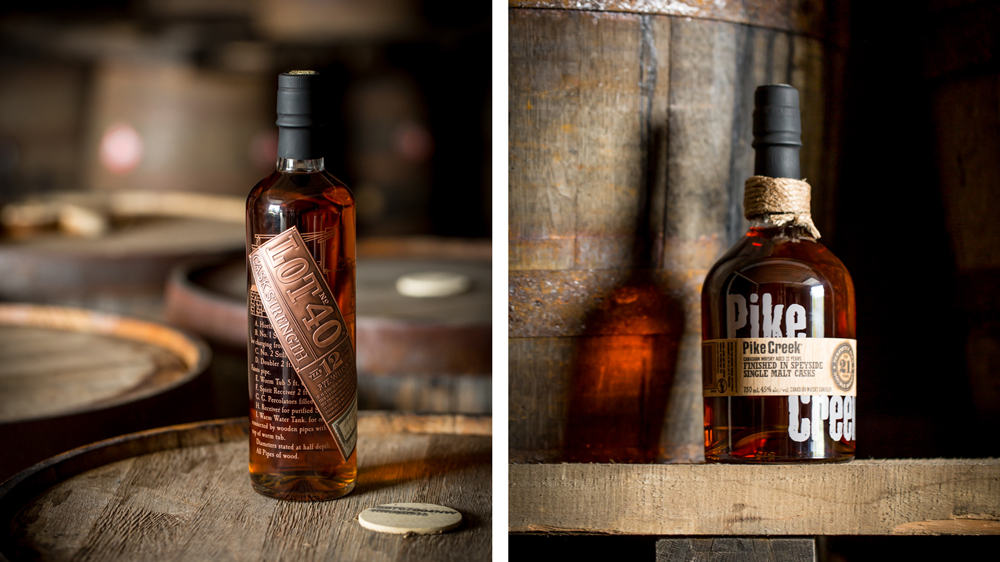 A decade ago, it seemed like Canada was going to be left out of the worldwide whisky revival. Canadian whisky was known for being light, mild, and easy to drink—exactly the opposite of what newly sophisticated drinkers were seeking.  But the Great White North has retooled in the wake of the Great Brown Spirits boom. Homegrown rye, which used to be neutered by neutral grain spirits, is now used to create bold, flavor-forward whiskies. In 2015, Crown Royal’s Northern Harvest Rye was crowned Whisky of the Year in Jim Murray’s Whisky Bible, the first time a Canadian brand had been so honored.

Now, Canada’s revered Hiram Walker distillery is pulling out all the stops with its Northern Border Collection: Rare Releases, a foursome of rare and exclusive expressions from some of the country’s most acclaimed and cutting-edge brands. This is Canadian whisky’s coming-out party—a chance to show the world how strong the category is and where it’s headed. Like its American equivalent, the Buffalo Trace Antique Collection, these whiskies are extremely limited in quantity and highly sought after by whisky buffs in Canada and elsewhere. It might be harder to bag these bottles than to bag a moose, but the hunt will be worth it.

Canadian rye whiskey has historically been a blend of rye with neutral grain spirits, so this 100 percent rye expression—aged for 12 years and bottled at 110 proof—is a welcome change. It’s surprisingly sweet up-front, with vanilla, caramel, and honeyed notes gradually opening up into a familiar full-throated rye spice. The finish is long, smooth, and slightly vegetal—a terrific change of pace from American ryes. ($70)

Perhaps the least well known of the four brands in the States, Gooderham & Worts’ standard bottling is a four-grain expression, using corn, rye, wheat, and barley in its mash bill. Little Trinity forsakes the barley and is aged for 17 years. The softness of the wheat, the bold spice of the rye, and the sweetness of the corn make for a fascinating combination—each flavor is both distinct and part of the whole. ($80)

Pike Creek has traditionally been finished in port or rum casks. This limited expression has not only been aged more than twice as long as standard Pike Creek (21 years as opposed to 10 years), but it’s also been finished in Speyside whisky casks. Speyside malts are traditionally sweet and gentle; here, they impart a buttery smoothness on the tongue along with lush toffee notes to complement the oaky spice. ($90)

Wiser’s 18-year-old is one of the most revered Canadian whiskies, so this 35-year-old expression—the oldest Wiser’s ever released—has been hotly anticipated.  Bottled at 100 proof, it gives off notes of baking spices, candied orange peel, and honey, with a gentle, tingling spice that lingers throughout the dry, impossibly long finish. ($165)