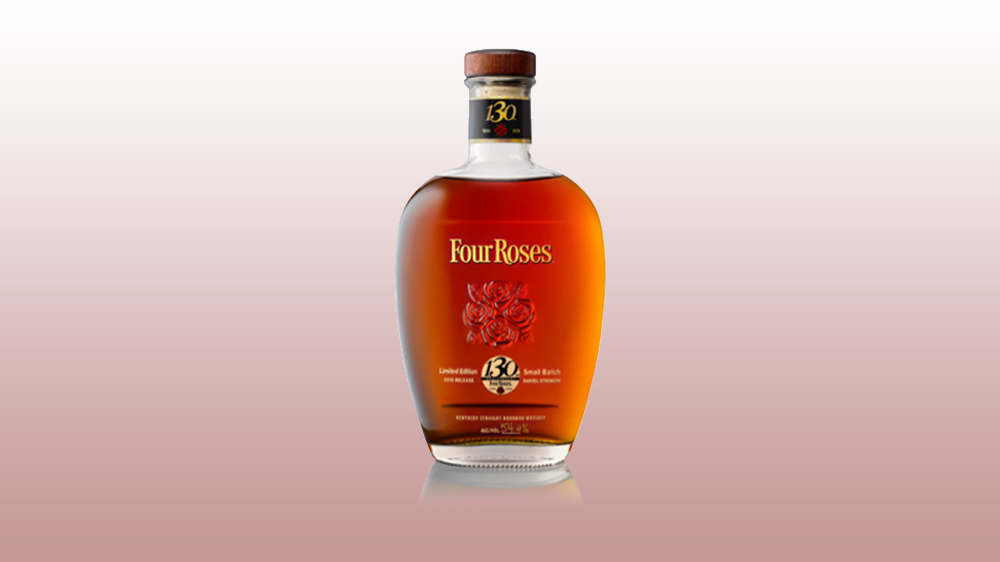 Though Four Roses is one of America’s most popular bourbons, it’s a brand whose origins are shrouded in mystery. But despite its murky history, we love what pours out of the company’s distillery. And we know that the brand is about to celebrate its 130th anniversary.

No one really knows how Four Roses got its name. According to current company lore, in 1884 an ex-Confederate army officer named Paul Jones Jr. – who had become a successful Louisville, Kentucky whiskey distiller – was smitten with the beauty of a Southern belle. Consequently, the 44-year-old Jones sent her a handwritten proposal of marriage prior to accompanying her to a grand ball. She, in turn, teasingly replied that if her answer were “yes,” she would wear a corsage of roses. On the evening of the ball, she appeared with a corsage of four red roses. In honor of this, in 1888, Jones trademarked one of his most popular bourbons as Four Roses.

That’s one version, but Four Roses’ origin story isn’t quite so black and white. Another tale is that after the Civil War, Jones worked for a Georgia distiller named Rufus Mathewson Rose, along with Rose’s brother and two sons. Jones, who by some accounts was a lifelong bachelor (thus belying the adorable marriage corsage legend), eventually opened a distillery in Louisville, Kentucky, on Main Street’s famed “Whiskey Row.” In 1888, he named one of his new bourbons in honor of the four Rose family members.

While not as romantic a tale, we do know that – at least according to Four Roses historian Al Young – that Jones’ nephew, Lawrence LaValle Jones, was the driving force behind the brand until his death in ‪1941. In fact, during Prohibition, Four Roses was one of just six distilleries that remained legally licensed to distill bourbon for “Medicinal Purposes Only.”

Today, the Four Roses Yellow Label is the “go-to” cocktail bourbon for numerous mixologists. However, to celebrate this iconic whiskey’s 130th anniversary in 2018, Master Distiller Brent Elliott (who also holds the title of Four Roses Director of Quality), has created a limited-edition whiskey that rivals anything Paul Jones, Jr, or any of the subsequent Four Roses owners, ever bottled. This is especially significant when one realizes Four Roses is the only bourbon distillery that combines two separate mashbills with five proprietary yeast strains to produce ten different bourbon recipes, each with its own unique characteristics. The Four Roses 130th Anniversary Limited Edition Small Batch bourbon was created by utilizing four of these distinctive bourbon recipes, and incorporates 10, 13, 14, and 16-year-old bourbons.

“The goal with my mingling of four different batches of four different recipes of varying ages,” says Elliott, “was to utilize the different flavors to achieve a complex and balanced bourbon. The nature of this approach compels us to make a more delicate bourbon, so all the nuances can be appreciated.”

Indeed, the Four Roses 130th Anniversary Edition is noticeably more delicate than Elliott’s award-winning Elliott’s Select. That was his first (and highly acclaimed) offering after assuming the Master Distiller mantle from his mentor, Jim Rutledge in 2015; Rutledge originally distilled all but one of the whiskies Elliott selected.

“Elliott’s Select utilized around 95 barrels that ranged in proof from just over 100 to almost 120,” notes Elliott, by way of comparison. “For the 130th, we dumped over 100 barrels, but because it’s a small batch, we mingled them together to arrive at one uniform barrel strength blend of 108.3 proof.”

Because all Four Roses bourbons are column distilled, they have a signature smoothness, and the 130th Anniversary bourbon is especially, in Elliott’s words, “…mellow, elegant and complex.”  The bouquet is rich with the fragrance of burnt citrus and cedar; pouring this bourbon over a single cube of ice releases soft, almost ethereal flavors of cinnamon, raspberries, apricots, and toasted oak.

Approximately 13,140 individually hand-numbered bottles of the 130th Anniversary Limited Edition Small Batch Bourbon will be available, beginning on Saturday, September 15, 2018 at the Lawrenceburg, Kentucky Distillery & Visitors Center, before going national in the following weeks, with a suggested retail price of $140.

This is unequivocally a whiskey that reflects Elliott’s divergent style, but, unlike the origin of the Four Roses name, there is no mystery to the fact that, under Elliott’s guidance, it portends interesting prospects for future limited editions.