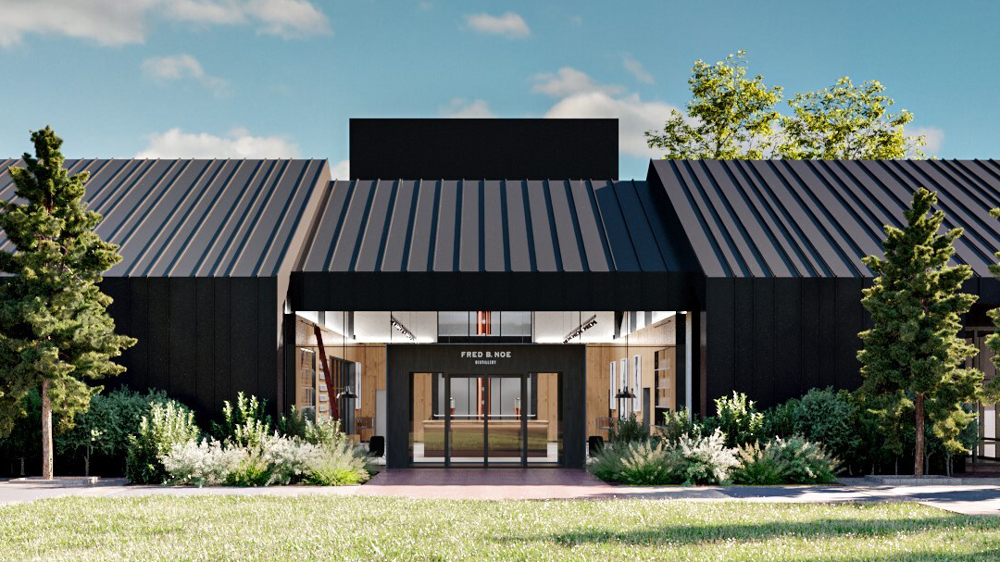 Freddie Noe could be considered bourbon royalty, if there is such a thing, although that’s not something he’d likely bring up in conversation. He’s the grandson of former Jim Beam master distiller Booker Noe and the son of current master distiller Fred Noe, two major figures in the modern history of Kentucky bourbon. On an early August morning, Noe squinted in the bright sunlight outside a construction site on the Beam campus in Clermont, Kentucky. He was there to lead a tour for some visiting journalists of the brand-new Fred B. Noe Distillery, a facility that will focus on experimentation and smaller scale production outside of the rest of Beam’s massive operation. Or as Noe put it, “Here we have the opportunity to do some ‘oops.’ And if we do hit on something that could have been an ‘oops,’ but turns out to be great, we can scale it up to the big distillery if we need [to increase] volume.”

The hard hats we were instructed to wear still had the term “craft distillery” on them, but that terminology was no longer being used, which makes sense. After all, this is Jim Beam, the best-selling bourbon brand in the world, so the scale of production is massive. While there’s no legal definition for “craft,” it generally brings to mind a small, scrappy distillery making very young whiskey on a micro scale. That is obviously not what Jim Beam is or does. But the term craft also literally means doing or making something that requires skill and dexterity, and that certainly applies to making whiskey, regardless of the size of the operation.

Booker’s will be made inside this new distillery.  Photo: Courtesy of Booker's

The Fred B. Noe Distillery is Freddie’s baby, and he’s understandably excited about the opportunity to have a space dedicated to innovation and experimentation with things like mash bills and proofing. Also, production of two of the Jim Beam Small Batch Collection bourbons, Baker’s and Booker’s, will be moving to this new distillery. While I was visiting, the initial tests of the first run of the Jim Beam mash bill had just concluded, an important step to ensure that the FBN Distillery can match the quality of the whiskey being made at the main facilities. Also, renewable energy will be used to power the new distillery, a classroom for the University of Kentucky’s James B. Beam Institute for Kentucky Spirits will be located there, and visitors from the whiskey business will have opportunities to sample new liquids and try their hand in a blending lab.

On a day-to-day basis, Booker’s and Baker’s will be the main whiskeys made at the Fred B. Noe Distillery, and the production process will stay true to what consumers already know and love. “You gotta honor what we’re already doing,” said Noe, “you don’t go rogue on Booker’s. You run it to Booker’s parameters.” Noe and his team have already allocated nine weeks out of the year for experimentation, but making sure the new distillery can accurately produce the classic Jim Beam mash bill is just as important, as that is the backbone of most of the whiskeys under the Beam umbrella.

In a day or two, Noe was planning on having his dad come by to walk through the distillery and see his name above the doorway for the first time, something he expected to be an emotional experience. “He knew I needed something like this [distillery],” said Noe. “But to see him let me step into the light with him, own this facility… One of the reasons why he didn’t want to be here today, he said, ‘I didn’t have anything to do with it, I just helped you get it sold.’ So it’s kind of like his gift to me to be able to continue the legacy and continue making new whiskeys.”

Given Noe’s bourbon pedigree, he clearly could have coasted his way through a career with a desk job or traveling the country as a brand ambassador, or even had nothing to do with making bourbon at all. Instead, he’s taken a hands-on approach, even coming up with his own brand called Little Book. This always interesting expression is an annual release, each one a unique blend of different types of bourbon, that launched in 2017. The latest is Little Book Chapter 5: “The Invitation.” It’s a blend of four bourbon streams: two-year-old straight bourbon that came off the still at a lower proof than usual, three-year-old 100 percent malted rye whiskey, five-year-old straight bourbon and 15-year-old straight bourbon. There’s a lot going on here, from the use of an exceptionally young whiskey as the base of the blend, to a markedly older one, to a spicy rye that deviates from the typical Beam recipe.

The upper floor of the distillery.  Photo: courtesy Jim Beam

As has been the case with previous Little Book releases, this cask-strength blend of bourbons is singular and complex, with the recognizable backbone of a Beam whiskey augmented and amplified by a myriad of other flavors. Production of this label will shift to the Fred B. Noe Distillery, although obviously it will be years before any whiskey is old enough to be used in a blend. This is Noe’s whiskey lab, his bourbon playground, and given the smaller scale and freedom he has, there’s really no limit on what he can try to distill. For example, he specifically mentioned testing out a four grain whiskey at some point. But the most tantalizing peek into what Noe might have in store was revealed when he brought us into one of the warehouses to taste some whiskey straight from the barrel. Reps for the distillery asked that I not disclose exactly what we tried, but I can say these were unique mash bills and blends that are, for the most part, unlike anything Beam has released before. While this whiskey was produced in small amounts and blended at the primary distillery, the new FBN Distillery will be the home for future experiments like these.

Spend a little time with Freddie Noe and it becomes apparent that this eighth-generation Beam distiller is the real deal, with blending being a particular area of interest as evidenced by the Little Book releases. The Fred B. Noe Distillery is a major investment of resources and time for Beam Suntory, as well as a statement of trust and belief in Noe’s abilities to spearhead the operation. And given the volume of sales of the tried and true Jim Beam products, the company doesn’t really need to spend its capital on smaller batch experiments. But these continue to be of great interest to whiskey fans, and while the “craft” designation may have been dropped from the distillery’s name, the actual craft is very present when you taste the liquid. If the future whiskey from the FBN Distillery matches Noe’s enthusiasm and passion for innovation, we should be seeing some really good bourbon, rye, and other types of whiskey being bottled in the not too distant future.