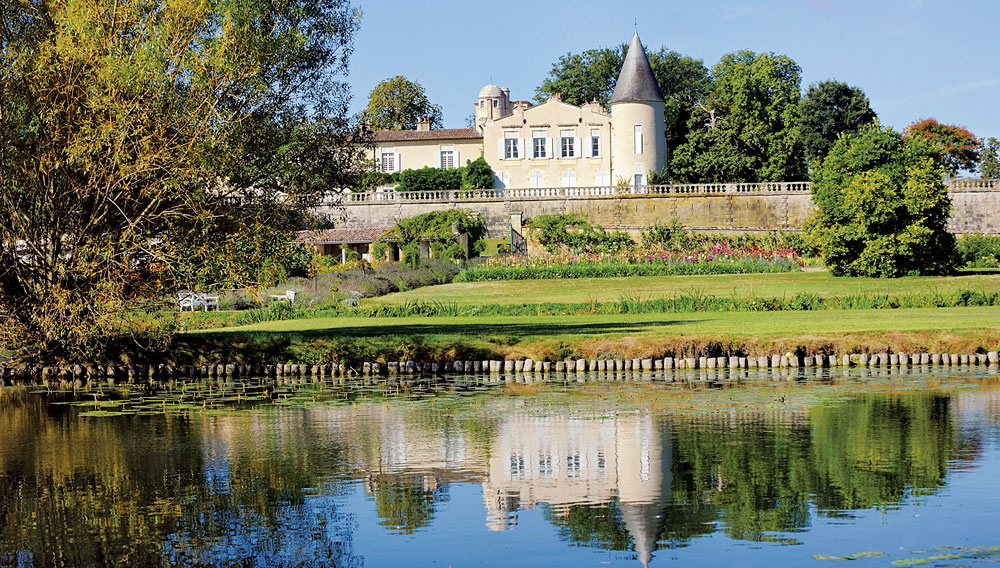 In 1755, when Armand de Vignerot du Plessis, third Duke of Richelieu and marshal of France, was taken ill while in Guienne, a physician prescribed liberal doses of a certain red wine from Bordeaux. When Richelieu returned to Versailles, Louis XV remarked that he appeared to be at least 25 years younger than when he left. “Your Majesty must no longer be kept in ignorance of the fact that I discovered a fountain of youth there,” said the courtier. “It is a generous, delicious cordial, comparable to the ambrosia on which the gods of Olympus sup.”

Thereafter, this restorative—known as the “King’s wine”—flowed freely at the royal table, and Château Lafite assumed its place as the undisputed ruling house of Bordeaux. This regal reputation served the estate well when, 100 years later, in 1855, Napoleon III ordered the classification of the leading wines of Bordeaux for the Exposition Universelle in Paris. Lafite was ranked first among the four elite premiers crus (followed by Château Latour, Château Margaux, and Château Haut-Brion), each of which contributes to one of this year’s 21 Ultimate Gifts (section starts on page 141). This honor carried considerable weight with banker Baron James de Rothschild, who purchased the property he rechristened Château Lafite Rothschild (pictured) in 1868; yet it also weighed heavily upon his nephew, Nathaniel de Rothschild, begetting a bitter family rivalry.

James was the youngest son of Mayer Amschel, a coin dealer and merchant in Frankfurt, Germany, who, as his business interests prospered, sent his offspring to Vienna, Naples, London, and Paris to establish offices that, combined, became one of Europe’s most powerful international banks. Head of the Paris operation, James played a prominent role in the family’s rise to power, and as his responsibilities grew, he recruited his English nephew Nathaniel to assist him.

Though Nathaniel retained his British citizenship, he developed a passion for all things French—including James’s daughter, whom he married. In 1853, he purchased Château Brane-Mouton, the vineyard estate adjacent to Château Lafite, which he renamed Château Mouton Rothschild. Nathaniel expected his estate to be designated as a first-growth in 1855, so its classification among the second-tier properties came as a hard blow. Despite Nathaniel’s disappointment, James’s sons apparently resented their English cousin’s foray into the French wine business and persuaded their father to buy the top-ranked Lafite. Indig­nant, Nathaniel devised a motto for his château: “First I am not, second I do not condescend to be, Mouton I am.”

From the beginning, 76-year-old James cautioned his sons that they were bankers, not farmers, and his own speculative approach to wine bore out this fact. “I sold my wine the other day at the wonderfully high price of 5,000 francs the barrel,” wrote Nathaniel to his family in London, two months after James’s acquisition.”Our uncle hasn’t yet disposed of his Lafite; he thinks the price will rise still higher.”

Though James kept his eye on prices, he never set foot on his new château’s soil: One month after Nathaniel penned his letter, James died of an illness that his doctors diagnosed as jaundice. Nathaniel outlasted him by only two years, succumbing in 1870 to injuries sustained in a hunting accident that left him blind and paralyzed. Their feud, however, survived well into the 20th century, as Nathaniel’s great-grandson, Baron Philippe de Rothschild, tirelessly petitioned the French government to reclassify Mouton; in this effort, his Lafite cousins, led by Baron Eric de Rothschild, frustrated him for decades, lobbying vocally against such a change. Only when the dispute culminated in a price war that threatened the prestige of the entire region did the makers of the “King’s wine” at last acquiesce. In 1973, Château Mouton Rothschild was elevated to premier cru status, and a vindicated Philippe duly revised his great-grandfather’s motto: “First I am, second I was, Mouton does not change.”

CORRECTIONS: In a story in the Fall 2012 issue of the Robb Report Private Aviation Sourcebook (“New Fleets Afoot”), the phone number for Pentastar Aviation should have been 800.662.9612. In the story “Winter Vintages” in the Robb Report Holiday Host’s Guide 2012, $699 should have been the price for the Dom Pérignon 1992 Oenothèque Rosé Brut Champagne, $159 the price for the Dom Pérignon 2003 Brut Champagne. Also in the Host’s Guide, the story on DeLeón’s Leóna Reserva Tequila (“Spirits of Giving”) should have been accompanied by an image of that spirit’s bottle, rather than by the DeLeón Añejo image that appeared in the section.