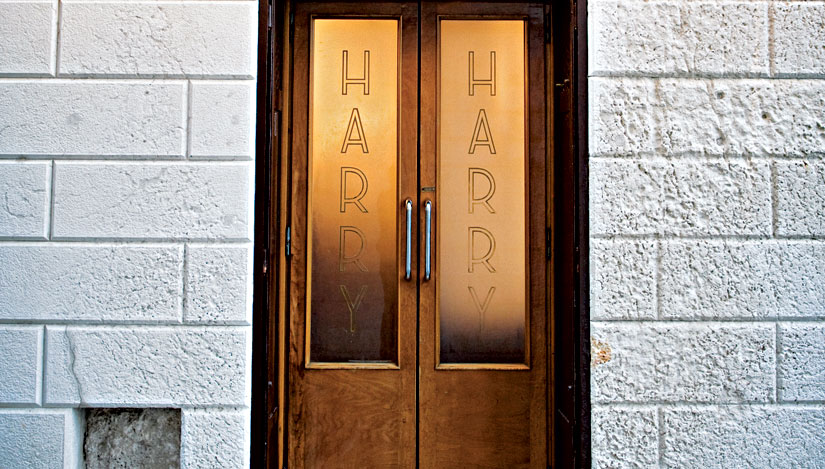 If the formula for a great bar is one part ambience, one part comfort, and one part service finished with a dash of that strange serendipity that arises from the congress of incongruous souls, then none of history’s watering holes has enjoyed a more generous portion of this last ingredient than Harry’s Bar in Venice, Italy. This venerable Venetian institution was established in 1931 by Giuseppe Cipriani, whose enterprises also included the Hotel Cipriani (now owned by Orient-Express Hotels), where the master mixologists in our piece on the new Bar Toscana (see “Toscana Twist“) were schooled in the liquid arts. The tale of its birth is well known to readers of guidebooks. While tending bar at the Hotel Europa, young Cipriani met Harry Pickering, a young American from a moneyed family who was in his cups and out of cash. Cip­riani, who enjoyed a man who enjoyed a drink, took pity on his client and lent him the equivalent of 10,000 lire. The profligate returned to America but reappeared in February 1931 to repay the bartender’s largesse with 30,000 lire in interest—enough for the bartender to open a bar of his own, which he named for the amiable reprobate.

Cipriani found a small tackle warehouse on the waterfront and furnished the space for comfort, offered white-jacket service, and left the ambience to the charms of the Grand Canal outside his door. The congress of souls soon followed. Heiresses Peggy Guggenheim and Barbara Hutton, artist Georges Braque, composer Arturo Toscanini, Prince Aly Khan, comedian Charlie Chaplin, and writers Somerset Maugham and, of course, Ernest Hemingway turned up to order Montgomerys (a martini consisting of 15 parts gin to one part vermouth), Bellinis (Cipriani’s invention), and carpaccio, an impromptu dish that Cipriani devised for Countess Amalia Mocenigo, a Venetian aristocrat whose doctor had proscribed the consumption of cooked meat.

The trouble with Harry’s (yes, Alfred Hitchcock was also a patron) is that, like so many other attractions in Venice, its legend has been so brightly burnished by handling as to render the reality rather dull. The modern visitor expects perhaps too much from his moments there; he, too, wants his story to tell. I was no exception when, years ago, I first walked through those famous doors (pictured). Somewhere I had read that Orson Welles, another regular, frequently fortified himself with bottles of Dom Pérignon and platters of chicken sandwiches, often neglecting to pay his check. I intended to initiate myself into the mysteries of Harry’s by replicating this regimen—as a paying customer, of course. After being seated by one of the crisply uniformed operatives at a table the size of a manhole, I surveyed the spare interior, relieved only by its diminutive bar and muted oil paintings. The mood was somber, but I perked up once the wine was poured. The waiter, stiff as a starched napkin, approached, pen poised for my order. A chicken sandwich, please. We have chicken salad, he replied sternly. Recalling the diner scene in Five Easy Pieces, I suggested some slices of bread might be obtained. Apparently with the same scene in mind, he informed me in a withering tone, “We have chicken salad; there will be no sandwich.”

I finished my wine and asked for the check, realizing that I had somehow trodden upon the much-touted Cipriani hospitality. My embarrassment, however, turned to ire as I walked along the Riva degli Schiavoni, another mark in Venice’s centuries-old con game. “This grossly advertised wonder, this gold idol with clay feet, this trompe-l’oeil, this painted deception, this cliché,” wrote Mary McCarthy in Venice Observed, perfectly summing up my outraged response to La Serenissima’s cynical swindles.

Though I returned to Venice many times in the following years, I did not go back to Harry’s until, more than a decade later, in 2008, I happened to see a sign posted at the entrance: “Harry’s Bar of Venice, in an effort to make the American victims of subprime loans happier, has decided to give them a special 20 percent discount on all the items of the menu during the short term of their recovery.” The fraudster pitying the defrauded, I thought, as I stepped inside once again. I ordered a Bellini and, noticing that a club sandwich was now offered, timidly asked the waiter if that was the same sandwich that Welles had ordered. He frowned as he accessed what was doubtless a vast database of trivia, then smiled. No, he informed me, those sandwiches were shrimp.

Correction: The “Steering Committee” section in the March issue’s Car of the Year 2011 coverage (page 128) should have included George Peterson, general manager of Spring Mountain Vineyard and one of our drivers’ vintner hosts for the event.