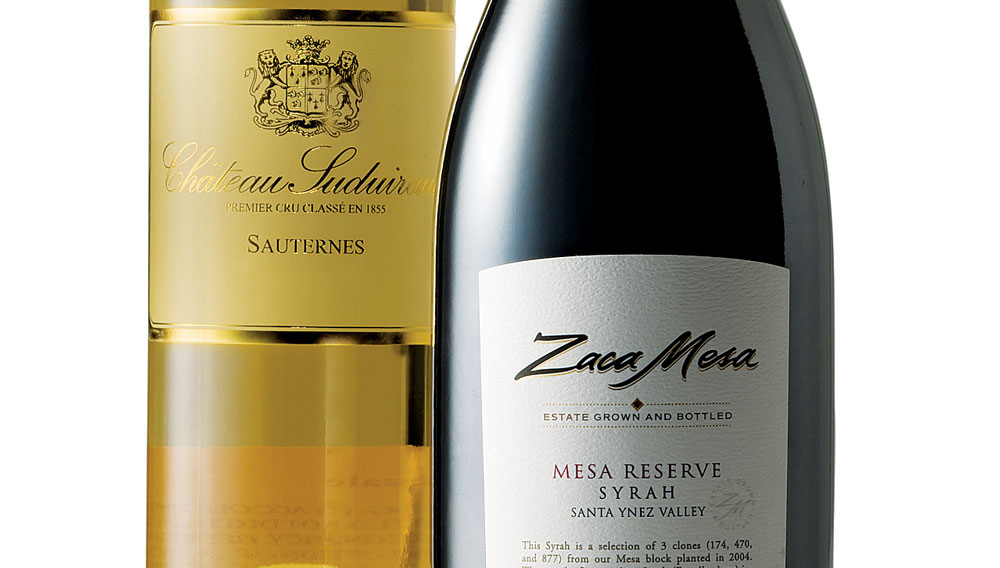 Since the 16th century, when Leonard de Suduiraut married Nicole d’Allard, the estate in the Sauternes appellation of Bordeaux that bears the groom’s surname has changed hands many times. Despite these vicissitudes, Château Suduiraut produced wines of such remarkably consistent quality that, in 1855, the estate was designated as a First Growth. Now under the care of managing director Christian Seely and technical director Pierre Montégut, the château continues to turn out splendid dessert wines that rival its fabled and better-known neighbor, Château d’Yquem. The Château Suduiraut 2007 Sauternes is somewhat coy on the nose, offering subtle hints of lemon preserves, wild honey, and citrus blossoms. But on the palate, lively acidity contrasts with a voluptuous texture and intense flavors of orange marmalade, ripe pineapple, and—on the lengthy finish—zesty sea brine. ($75) www.suduiraut.com

Santa Barbara County’s winemaking history dates back to 1782, when Father Junípero Serra planted cuttings along a creek in what is now downtown Santa Barbara. By the late 19th century, the county had 260 acres of vineyards; but after Prohibition, viticulture was slow to return to the area. Modern vineyards began to appear in the 1960s and early ’70s, when such latter-day pioneers as Zaca Mesa Winery planted its first vines. By the early ’90s, Zaca Mesa’s proprietors realized that Rhône varietals develop unique and vibrant expressions in the area’s climate and soil. Rhône-style wines like the Zaca Mesa 2006 Mesa Reserve Syrah have since formed the backbone of the winery’s varied portfolio. This inaugural vintage of Mesa Reserve Syrah is a melding of deeply extracted blackberry fruit with the pungency of roasted coffee, sweet tobacco, tar, and earthy chaparral. ($42) www.zacamesa.com