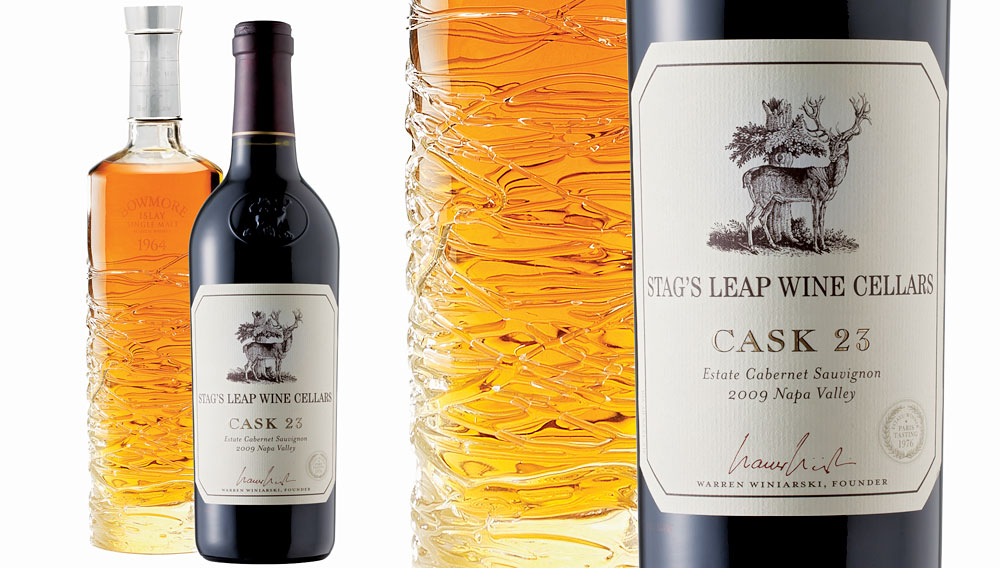 Water, barley, and yeast are not especially valuable ingredients; but, when combined at the Bowmore distillery, they can be transformed into something extraordinary. Such a miraculous metamorphosis took place in 1964, the year that the Islay distillery put into casks the handcrafted spirit that makes up the Trilogy, a sought-after limited edition that included three different expressions—Black, White, and Gold Bowmore. Yet the recently released Bowmore 1964 Fino outshines even these. This rare cask-strength whisky was aged primarily in ex-bourbon barrels and finished in Fino sherry casks to achieve its flavors of salty sea mist, moist peat, and citrus-soaked wood. The hand-blown bottle by Brodie Nairn and Nichola Burns, Scotland’s foremost glass artists, enhances the 1964 Fino’s rich, gold color, while an engraved silver neck collar and a silver stopper by Royal Warrant holder Hamilton & Inches signal the special nature of the contents. Only eight of the 72 bottles produced have been allocated for the U.S. market. ($13,500) www.bowmore.com

Serendipity played its part in the evolution of Stag’s Leap Wine Cellars. The first happy accident occurred in 1969, when founder Warren Winiarski met Nathan Fay, the first grower to plant Cabernet in what would later become the Stags Leap District. Winiarski was so impressed with Fay’s efforts that he bought a neighboring parcel; this land would become Stag’s Leap Vineyards, or S.L.V., which achieved renown in 1976, when the 1973 vintage was included in Steven Spurrier’s fabled Paris tasting. But the 1974 vintage brought an even greater stroke of luck for wine lovers: While sampling barrels of new wine, Winiarski and consultant André Tchelistcheff tasted one barrel (number 23) of such uncompromising quality that they determined to bottle it on its own, launching one of the region’s great reserve wines. Blended using the most expressive lots from S.L.V. and the Fay vineyard (Winiarski acquired that property in 1986), the Stag’s Leap Wine Cellars 2009 Cask 23 Estate Cabernet Sauvignon presents deep aromas of ripe cherry, licorice, and dried herbs and, on the palate, a silky texture laced with smooth flavors of blackberry and vanilla. ($210) www.cask23.com