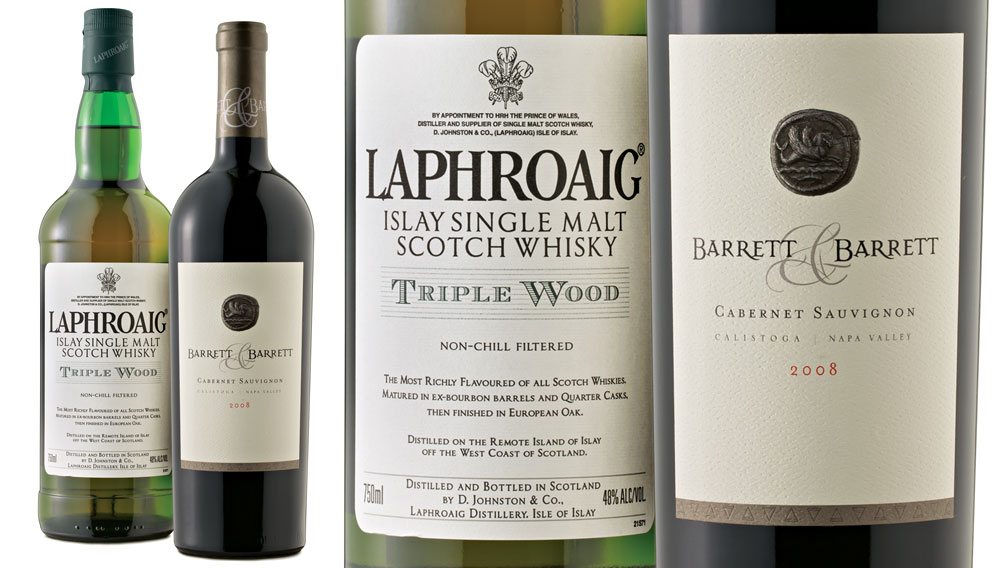 If the taste of a whisky literally reflected the topography of the place where it was made, then one would expect a dram of Laphroaig to be lean, even austere. The south coast of Islay, after all, is a bleakly beautiful stretch of rolling hills punctuated with periodic copses of trees and rugged reefs; yet this unique environment yields a whisky of untrammeled lusciousness. Smoke and tar from the peat used in the malting process characterize the nose and palate of Laphroaig, yet the whiskies receive their more subtle toffee and vanilla essences from aging exclusively in American-oak barrels from Maker’s Mark—that is, they did, until now. The distillery has just released a new expression, Laphroaig Triple Wood, which undergoes a three-stage maturation process in ex-Bourbon barrels, smaller 19th-century-style quarter casks, and, finally, European oloroso-sherry casks. The result is a slightly less smoky whisky that shines with sunny notes of caramel, sea salt, candied lemon, honey, and tea. ($60) www.laphroaig.com

Opposites do not always attract, but on the occasions when they do, beautiful harmonies often result. Such is the case with winemakers Bo and Heidi Barrett, who have blended their distinctive styles in their first collaboration, Barrett & Barrett 2008 Cabernet Sauvignon, which is made from fruit grown on the couple’s vineyards in Calistoga, Calif. As a winemaker at his family’s Chateau Montelena estate for the last 30 years, Bo has produced a succession of extraordinary vintages that have made the property synonymous with classically structured Napa Valley Cabernet Sauvignon. Heidi, on the other hand, emerged as the chief exponent of small-production boutique wines during her 14-year tenure as winemaker at Screaming Eagle, and her reputation has been further enriched by her work with her own label, La Sirena. The supple, garnet-red wine marries Heidi’s gift for rendering layered details—aromas of lavender, allspice, and nutmeg, as well as flavors of blackberry, plum, and cherry—with her husband’s skill at crafting wines of indelible structure and pleasing restraint. ($750 per three-bottle case) www.barrettwines.com