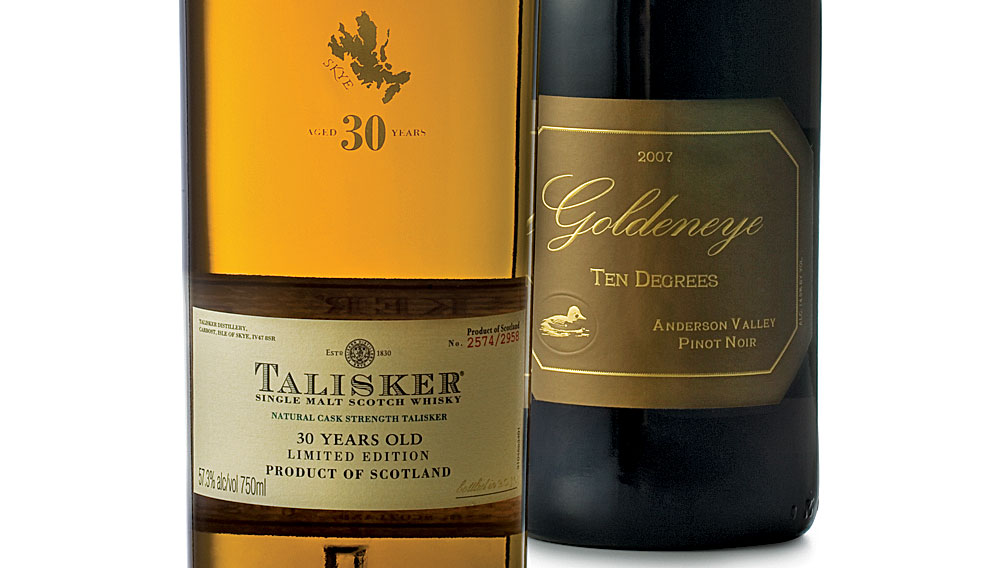 Founded in the mid-1970s, Duckhorn Vineyards fast earned a reputation for producing excellent Cabernet Sauvignon and stylish Merlot, but still the prospect of pursuing the perfect Pinot Noir tantalized owners Margaret and Dan Duckhorn. In the early 1990s, the couple searched for the vineyards that would enable them to realize this ambition, exploring the Carneros and Russian River Valley regions before settling on territory in Mendocino County’s Anderson Valley. After acquiring Gowan Creek Vineyard (the first of four properties), the Duckhorns dubbed their new project Goldeneye Winery—a name that not only alludes to a species of duck that migrates through the area, but also maintains the anatine nomenclature the couple established a few years before when they christened their second winery in Napa Valley Paraduxx. The Goldeneye 2007 Ten Degrees Pinot Noir, a potent blend of the finest lots from each of their vineyards, is heady with aromas of blackberry and smoky chaparral. The texture is unctuous, and a precise mineral finish punctuates its palate of concentrated flavors. ($100) www.goldeneyewinery.com

The single malts from Talis­ker have certainly earned their nickname, “the lava of the Cuillins.” Yet this moniker—which refers to the spirits’ trademark peppery character, as well as to the 181-year-old distillery’s solitary location in the jagged Cuillins hills that cover western Scot­land’s Isle of Skye—is an especially apt one for the Talisker 30-Year-Old Special Release, given its cask strength of 57.3 percent alcohol by volume. Though this rare whisky may scorch the throats of the uninitiated, it reveals its complexity to more tutored taste buds. Hints of leather and smoke do not overpower the sweeter notes of dried apricot, apple skin, and toffee. Talisker’s distinctive pepper appears on the palate, as do rich spices. The finish is long, smooth, and laced with roasted malt and molasses. Even diluted, this whisky will likely blow the novice drinker’s top. ($349) www.malts.com