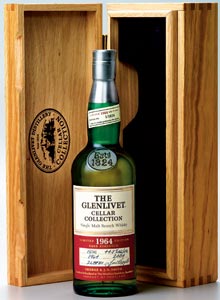 While the Glenlivet arguably remains America’s most widely consumed single-malt whisky, this venerable Speyside institution has gained a substantial reputation among the cognoscenti for its vintage releases. In 2002, master distiller Jim Cryle unveiled the 1959 Limited Release—a delicious blend of floral essences, dark rum spice, and a touch of smoke.

Now, two years later, he has selected yet another distinguished year from the depths of his cellar: the Glenlivet Cellar Collection 1964. Aging for 40 years in sherry oak casks, this latest reserve was spared chill filtering to retain its powerful medley of flavors. The whisky was not diluted at bottling, allowing us to taste it at full strength, as from the cask. The result is a spirit of astonishing beauty and flavor that presents a nose bursting with buttery cake, dried fruit, plum, and holiday spice. Traces of herbs, heather, and a satisfying peppery bite finish the quaff. While the taste is large and satisfying, the supply of the Glenlivet 1964 is not: Only 1,824 bottles are available. ($2,000)

The introduction of a new single-malt Scotch is rare, which makes Tormore 12-Year-Old something of an event in the spirits realm. Unlike some distilleries, which can trace their histories back to the time of Bonnie Prince Charlie, Tormore dates only to the era of Charlie Brown, having been founded in 1958. Since that time, the distillery has blended its yield into whiskies that do not bear the facility’s name. With this offering, aficionados have the opportunity to taste this curious Speyside in its pure form for the first time.

Tormore exhibits a smoothness derived largely from its water source: five crystalline, icy springs that flow into the River Spey, creating eddies that host pearl-producing mussels whose sensitivity to pollutants has rendered them all but extinct elsewhere. This pristine environment imbues the Tormore with a fresh flavor that recalls the finest Irish whiskies. The pale amber liquid’s scent is a delicate blend of anise with lemon and orange rind, while the flavor presents a subtle infusion of nutmeg, cinnamon, and clove. ($43)

The Best Sound Machines for Sleep