By Richard Carleton Hacker on August 1, 2004 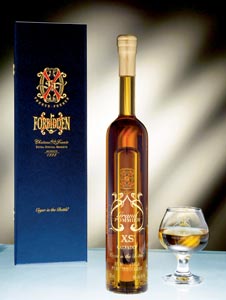 In 1992, the Arturo Fuente Cigar Co. literally planted the seeds for the Fuente Fuente OpusX, which would become one of the most sought-after cigars in history. It was the first cigar with a wrapper, binder, and filler that were all grown in the Dominican Republic. Now, 12 years later, the Dominican Republic’s Château de la Fuente has created an even more exclusive cigar: the Forbidden X.

This limited-edition puro is slightly subtler than the OpusX; a higher percentage of filler comes from the mellow middle of the plant. After aging as long as 10 years, these tobaccos are finished in French oak Calvados barrels to lend delicate apple and oak nuances that complement the smooth spice of the cigar. Only two torcedores roll the 6⅜ x 49 ring gauge cigars, which are then aged in cedar for more than a year. Finally, the cigars are encapsulated in a bottle of 40-year-old Grand Pommier XS Calvados. “Originally, creating an all-Dominican cigar was a forbidden project,” says company president Carlos Fuente Jr. “Combining the Forbidden X with a brandy made from apples, the forbidden fruit, is a perfect pairing. It had to be destiny.” A portion of the proceeds from every Forbidden X will be donated to the Cigar Family Charitable Foundation, an organization founded by Fuente Jr. to assist needy children in the Dominican Republic. ($250)

How to Make a Paloma, the Simple, Endlessly Refreshing Tequila Cocktail

The Final Balvenie Fifty Marriage Series Whisky Is Here, and You Can Own It for $40,500

Download Out of the Blue: The New Blueprint for Denim’s New Reality