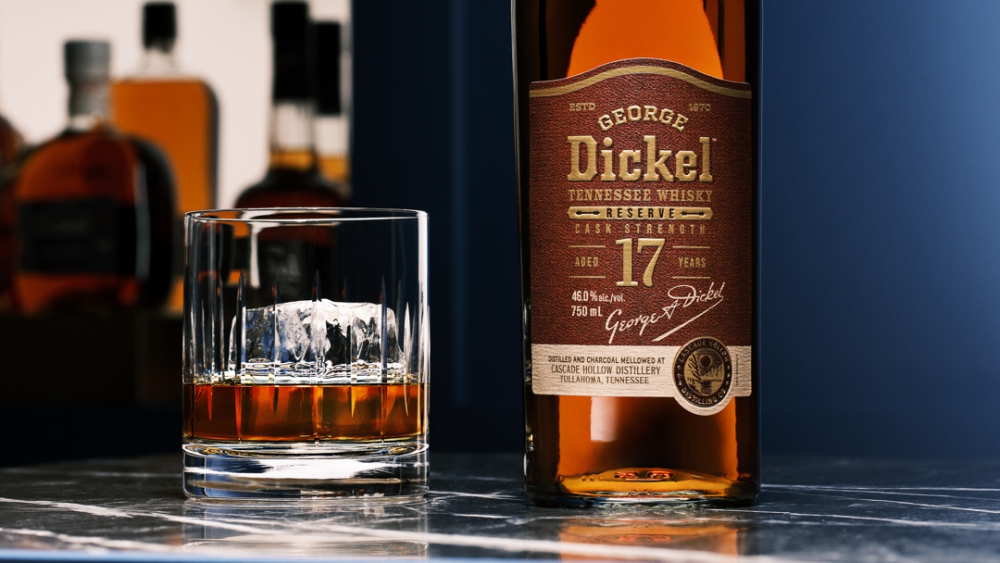 In 2016, Tennessee whiskey brand George Dickel released a 17-year-old expression in small 375-ml bottles, and devoted fans promptly fell in love with it. Six years later, the Cascade Hollow Distilling Co., now under the direction of GM and distiller Nicole Austin, has brought it back. George Dickel 17 Year Old Reserve is now in full-sized 750-ml bottles, and we got a first taste while we chatted with Austin about this new whiskey.

There are a whole lot of barrels aging at Cascade Hollow in Tullahoma, TN, and Austin has used these (as well as overseeing distillation of new whiskey) to create some truly outstanding releases since she came onboard in 2018 including Dickel Bourbon, the Bottled-in-Bond vintage whiskeys and the more experimental Cascade Moon series. “I had never before in my life had the privilege of having 15-plus years worth of whiskey ages that were all mine to play with,” Austin told Robb Report. “I did a really big sampling in the first year. I think my poor warehouse team still talks about it… It was thousands and thousands of samples that they pulled… It was sort of like a refreshed look at it—what do we have, what are the characteristics of the different years? The other big challenge at Dickel was that we’ve had a rough history as a brand. People could never quite figure out if they loved it or hated it, so the production would be ramped up and then ramped down and was very uneven.”

The mashbill of the new 17-year-old is the core Dickel recipe—84 percent corn, 8 percent rye and 8 percent malted barley—and it’s bottled at 92 proof. Austin said that part of the challenge was to match the flavor as closely as possible to the original release, or at least to pay homage to it. “Up until this year we’re getting phone calls asking, ‘Do you have any more of that 17-year-old?’ So it had been in my mind for a while that I needed to get some barrels to that age and try to make sure that they taste good. I don’t know if we’re skirting the upper limits, but it becomes important to be more intentional as the age gets higher.”

This is an intense and rich whiskey, and its age does indeed show up in wonderful and intriguing ways. The color is a deep reddish amber, and on the nose it reads Dickel but with extra layers of dark fruit and nuts. The palate explodes with dark berries and loads of caramel and butterscotch, along with some dark chocolate and strong oaky tannins. But the Dickel character is still there, something that those familiar with the brand will pick up on. “It’s important for it to be balanced and have some other layers of complexity besides just the wood,” said Austin. “That waxy fruit Dickel character is definitely in here a little bit, and that was also important to me because that’s historically been part of our house style. I think there’s also a nice creamy character on the palate, which is pretty surprising for a whiskey of this age. It’s got a lot of complex aromatics.”

George Dickel 17 Year Old Reserve lives in its own lane and might not appeal to fans of the core lineup, something that Austin acknowledges. Speaking of which, the eight and 12 numbers have been removed from the labels over the past few months, and those whiskeys are now known as Classic and Signature. At best, those numbers were meaningless; at worst, they were misleading—something that Austin acknowledges. “It was important to me for people not to be confused,” she said. “But I also didn’t wanna change it too much because the people who have been drinking those whiskeys are really loyal and they like them. So I see myself as a steward of those whiskeys, and it’s my job to make sure that their flavor profile and character is protected as much as possible while I’m off here doing all these other things.”

The suggested retail price of the new 17-year-old is $250, which still seems like a bargain given the current state of American whiskey approaching two decades old. While Austin says she doesn’t really control the pricing, it was important to her for the cost of this whiskey to be reasonable (the same can be said for the BIB series). “I was trying to build trust with people,” she said. “People were kind of thinking Tennessee whiskey is not necessarily of the highest quality, or it wasn’t what they were looking for. I needed [the whiskey] to not end up as a dusty on a shelf, I needed people to drink it to see the quality. And that’s not gonna happen if you have really big price points.”

Ultimately, for Austin the re-release of this whiskey was about sticking with tradition while also continuing to push boundaries. “I’m pretty proud of it,” she said. “I think it’s very tough to make whiskey of this age that is balanced and complex and has a lot to offer. I know I’ve made big changes [at Dickel], but hopefully this is a nod to the people who’ve been fans for a long time.”