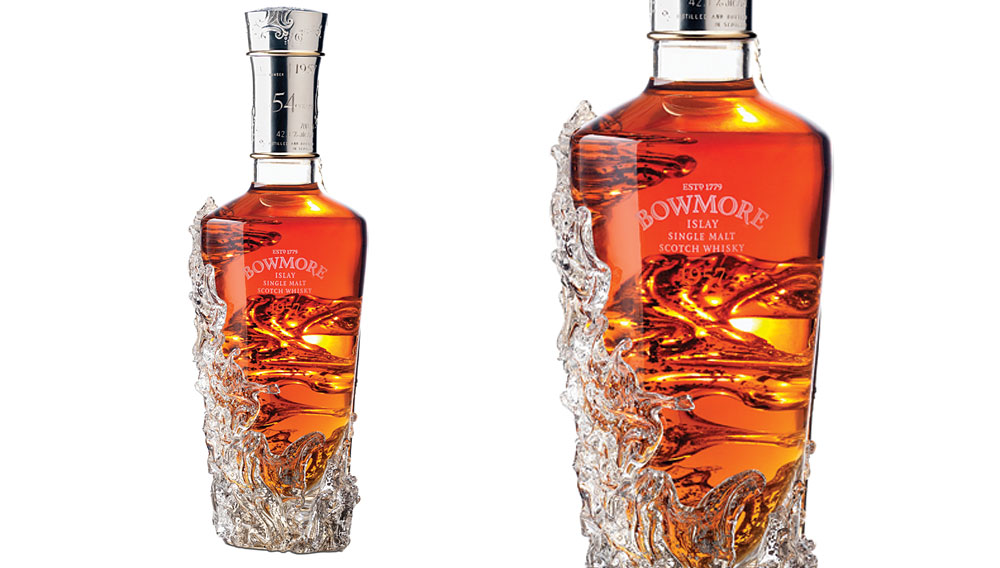 For the connoisseur of Scotch and the collector of whisky, a well-aged and limited release will always garner significant attention. If that whisky also is the oldest expression from any producer in a specific Scottish region, the desirability factor grows even higher.  So it follows that discerning Scotch drinkers will welcome the recent release of the Bowmore 1957—a 54-year-old single malt and the oldest Islay whisky ever released to the public. Only 12 bottles exist, and, at the time this story went to press, two bottles were scheduled to be sold through auctions in Edinburgh and New York. The remaining 10 bottles are available for sale through Bowmore, priced at £100,000 (about $160,000). “This is, to me, one of the most amazing whiskies that I’ve ever been involved in,” says Andrew Rankin, Bowmore’s chief blender. “As Bowmore gets older, it picks up this fantastic, lush, tropical fruit flavor. This one, in particular, has all of those characteristics, but [it’s] much more intense.”

Because the spirit is so rare, special attention was paid to the way the whisky is presented. It begins with a handblown bottle, glasses, and a water pitcher courtesy of Brodie Nairn and Nichola Burns. The team of glass artists crafted the bottle and the accessories to reflect the ocean waves that constantly crash against the sea-facing walls of Bowmore’s vault No. 1. Each piece is slightly different, though they all include flecks of platinum in the wave motif. “It was very important for us to understand how rare this whisky was and how precious it was,” says Nairn. “What we wanted to do was to design a bottle that would be stunning but would let the whisky shine through.”

Each bottle is capped with a handmade stopper and adorned with a neck collar, both made of platinum and crafted by Hamilton & Inches. The neck collar features hand engravings of the bottle number and spirit strength.

The entire package is set in a presentation box crafted by the notable woodworker Peter Toaig, who says he immediately wanted to use Scottish oak for a turbulent grain pattern that would reflect the wave motif found on the bottle. Each piece of timber was hand-selected and sawn specifically to the dimensions that Toaig needed. “Everything about this box is bespoke,” he says, “from the milling of the timber specifically for the project, to the fitting of the hinges and the cork lining to protect the bottle.”

In the end, the spirit itself is still the star of the show, but each element has its place and all were crafted with the same care and attention to detail that Rankin says goes into such a rare whisky. “It only comes about through experience, heritage, and time,” he says.