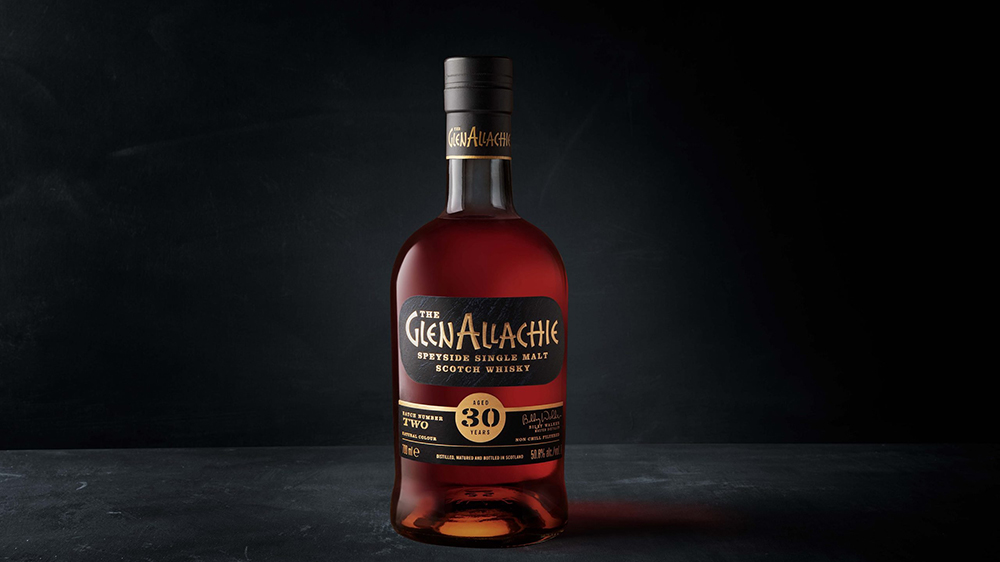 Apparently, once wasn’t enough for GlenAllachie.

The Speyside distillery has just unveiled its latest offering, the 30-Year-Old Cask Strength Batch 2 Single Malt Scotch. The limited-edition release is the second installment of the oldest expression in the brand’s core lineup of whisky, following last year’s initial bottling.

The single-malt was crafted by the GlenAllachie’s master distiller Billy Walker. To create the whisky, he selected eight vintages from 1990 and 1991 that were aged in six former Pedro Ximénez and Oloroso Sherry hogsheads and puncheons, as well as two 1990 American virgin oak barrels that had been toasted and charred. The whiskies were then blended and bottled at cask strength of 50.8 percent alcohol by volume (ABV), non-chilled filtered and without any added color, helping ensure that you’re able to enjoy the single malt at its purest.

The resulting expression, distiller says, is complex and carries a rich mahogany color. Its nose promises notes of honey, grapes and mocha, accented with cinnamon, coconut and other dried fruit. The taste aims to marry dark chocolate, figs and orange zest, with hints of syrup and nutmeg on the finish.

“When we first unveiled our 30-year-old Cask Strength annual release last year, we were completely overwhelmed and humbled by the immensely positive response from whisky fans around the world,” Walker said in a statement. “This fueled me with great enthusiasm to get underway with the next batch, endeavoring to raise the bar even higher with this installment.”

The second installment of GlenAllachie’s oldest core single malt is available to buy now from specialist retailers. The release is limited to a run of just 2,000 bottles, each of which carries a $756 price tag and comes in a special box with gold foil detailing and is stamped with Walker’s signature. With those kinds of numbers, don’t expect this hooch to last long.