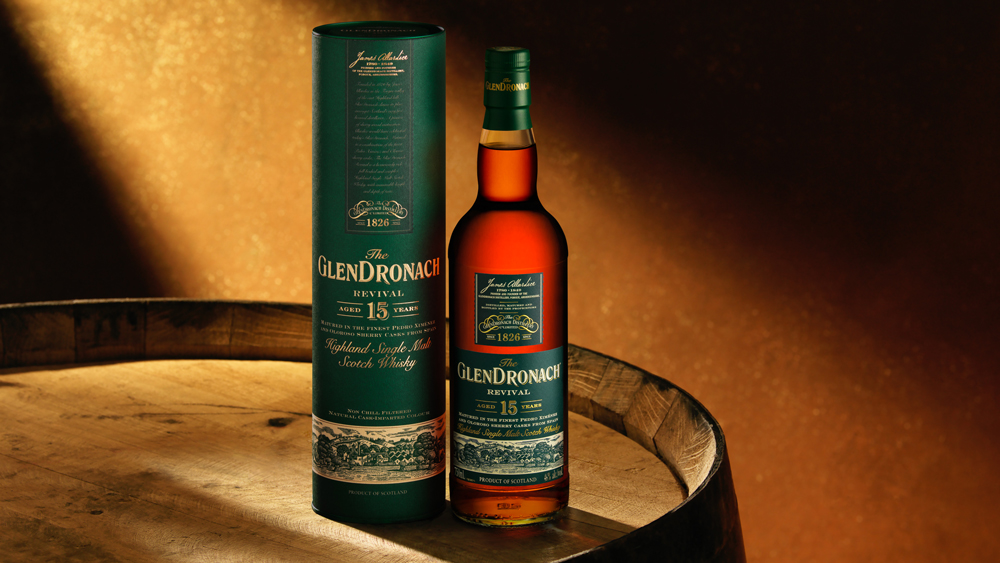 Photo: Courtesy of The GlenDronach

GlenDronach has a history as rich and robust as its sherry barrel-aged whiskies. The Speyside distillery was founded by James Allardice in 1826, making it one of the oldest in Scotland. Ten years later, it burned down. Subsequently rebuilt, it proceeded to go through a series of ownerships, until it was finally mothballed in 1996, with the double distinction of being one of the last distilleries to use coal-fired stills and to do its own floor maltings.

The distillery reopened in 2002 and was “modernized” by converting to steam-heated stills and buying unpeated malt from an outside source. Even so, GlenDronach continues to use traditional wooden washbacks. Today, under the new stewardship of Brown-Forman, the distillery has recaptured its former glory by maturing all of its whiskies in Pedro Ximénez and Oloroso sherry casks.

All of this has been embodied in GlenDronach’s newest 15 Year Old offering. It’s aptly named Revival, as this is not its first 15 year old single malt. Looking back in time, the initial expression was introduced in 1996, just before the distillery closed down. At only 80 proof, it was noticeably lighter in taste than subsequent versions. The second Revival attempt, in 2009, was a much heartier 15 Year Old, bottled at 92 proof. However, to conserve the supply of older whiskies, it was retired from the market in 2015.

Now, three years later, GlenDronach has released the much-anticipated return of its 15 year old expression, the GlenDronach Revival ($89.99), also at 92 proof, which has been created under the skilled supervision of GlenDronach’s master blender Rachel Barrie, one of the few women to hold this exalted position in the Scotch whisky industry. It is by far the most elegant—yet hearty—15 Year Old yet, thanks to Barrie’s judicious marrying of two distinctly different types of sherry casks.

“For each 15 Year Old vatting, I look for an integration of taste, complexity, and balance . . . and a richly satisfying finish,” says Barrie. “The majority of the casks in the Revival are Pedro Ximénez, which are 500 liters in size, but there are also some quarter casks—about 125 liters in size—used as well. That really brings out the rich fruit, dark chocolate, and tobacco that you find in this whisky, while the Oloroso casks contribute to those nutty and fruitcake characteristics. This combination makes for a very elegant, fruity, and robust balance between sweet and dry and results in a slightly different facet of GlenDronach.”

To be sure, there is a subtle difference between this newest Revival and its predecessors. With its all-natural antique bronze color derived largely from aging in Spanish sherry casks, and due, in part, to GlenDronach’s uniquely shaped tall, swan-neck-shaped stills, the GlenDronach 15 Year Old Revival is a very limited release that deserves to be, as Barrie suggests, “sipped and savored, neat, with no ice.”