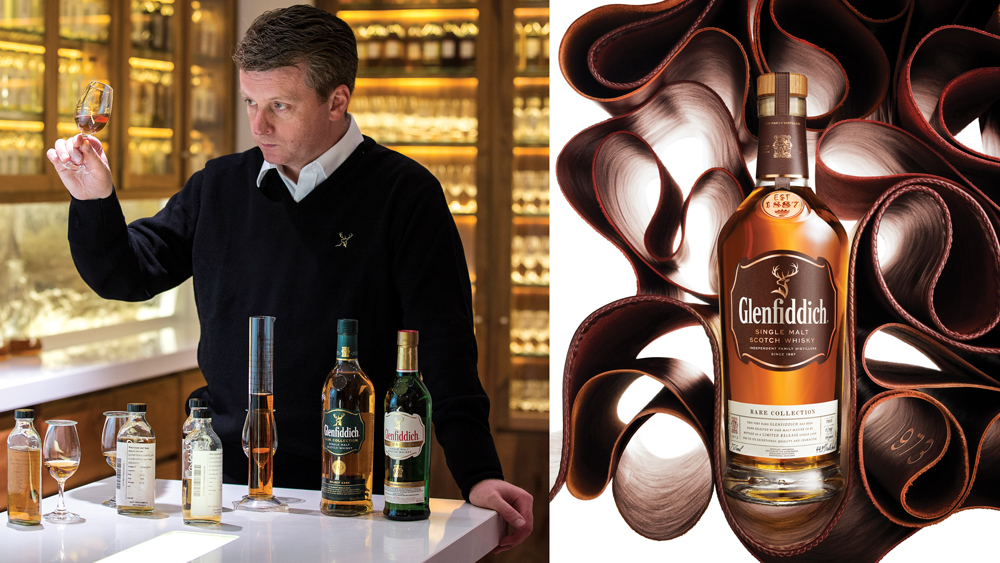 What goes into the making of a collectible bottle of whisky is as much about intuition as it is about chemistry. And that instinct grows stronger under the tutelage of a sage. Brian Kinsman, a chemist by training and the malt master at Glenfiddich, is now a whisky whisperer in his own right, having sharpened his talents by working with one of the industry’s most revered virtuosos: David C. Stewart. “Days working with David honed that gut feeling for how the distillery’s casks work,” Kinsman says.

Yet in this process, method abets instinct. The culling begins as early as 10 to 12 years into a whisky’s aging process. Most of Glenfiddich’s whisky ends its time in barrel at this stage to be blended into the brand’s signature 12-year-old offering. But while sampling, Kinsman sometimes notices a cask that seems unusual, so he holds that one back. “Then, when it gets older, say at 15 or 21 years, that’s the point you’re more likely to identify it for having a nice balance,” he says.

He samples many of the older single-malt stocks in the warehouses annually, and over time grows familiar with distinct barrels. “I’ve almost grown up with these casks,” he observes. “Certain ones just stick in your mind. You might have sampled it only a few times, but you remember it.”

One such whisky is the Glenfiddich 1973 Rare Collection Cask No. 7585 ($6,000) released last fall, which was first put into barrel 44 years ago, long before Kinsman’s tenure at the distillery. He had his eye on that cask, as it was classic Glenfiddich—a balance of vanilla, light spices, cinnamon, and a natural fruitiness that wasn’t overpowered by oak. “I knew it as soon as I sampled it,” he says, adding that with whiskies such as this, “you taste it, almost make a decision, leave it, then do it again to confirm your notes.”

As whiskies reach 30 years and older, the stocks dwindle to fewer than several hundred—enabling the malt master to know the remaining examples more intimately. While there is no age at which whiskies universally top out, Kinsman finds that some casks do lose their flavor over time, especially those aging in European oak; American oak can generally sustain the whisky for longer periods without releasing overpowering oaky notes. “There’s almost too much flavor [with European oak]. The whisky can’t cope, and loses its structure,” he says. “You could have 100 casks filled on the same day, and there is almost no rhyme or reason why one cask is better than another. That mystery is such an important part of whisky making. It could be that a particular tree had something, or a cooper did something special that day.” One of the best whiskies he’s sampled was from 1955. “It was so vibrant and fruity, and it was 55 years old! With the right cask and the right conditions,” he notes, “there’s really no limit.”