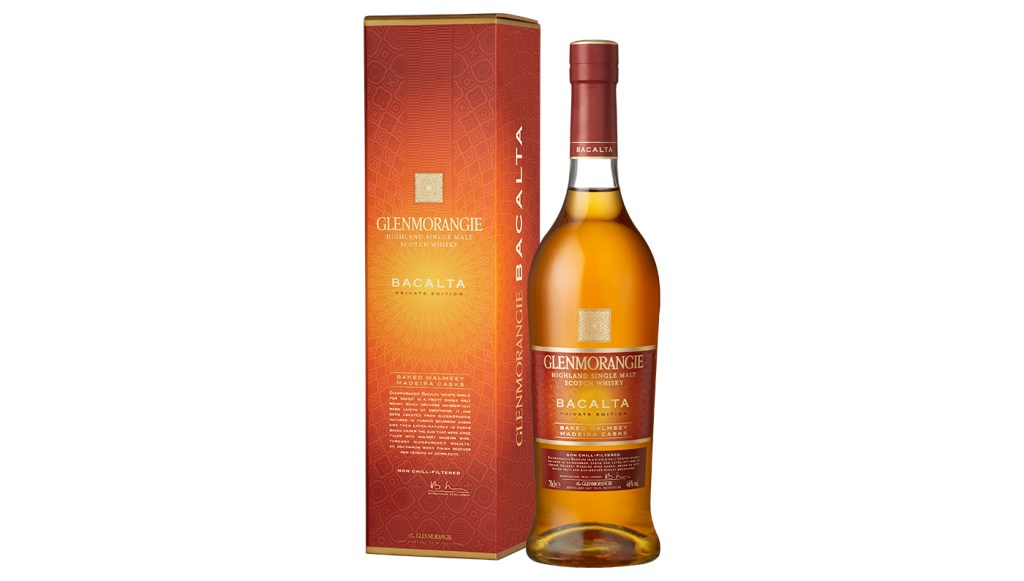 For eight years running, Glenmorangie has indulged its ardent supporters’ thirst for the new and different with limited release bottlings under the Private Edition banner. These sought-after whiskies are crafted using a process called “extra maturation,” in which the spirit ages (as per usual) in ex-bourbon casks, before soaking up further layers of flavor resting in used wine barrels. It’s a process Glenmorangie pioneered three decades ago, and over the years it’s yielded some memorable whiskies, along with a few missteps.

The legendary Bill Lumsden is Glenmorangie’s director of distilling, whisky creation, and whisky stocks. Along with that impressive title comes the freedom to try just about anything this side of bacon infusion. Twenty years ago, he dazzled Scotch aficionados with Madeira Finish, the world’s first whisky extra-matured in Madeira sherry casks. Today collectors pay top dollar to get their hands on stock from that off-market line.

Bacalta, Scots Gaelic for baked, is the latest release in the Private Edition range ($100). In returning to the sun-drenched Portuguese archipelago, Lumsden’s aim was nothing short of creating the finest Madeira-finished Scotch ever.

Lumsden arranged for custom-made casks to be assembled from tight-grained, air-seasoned American oak staves. The casks were heavily toasted to ensure the wood’s deep, rich flavor would emerge. Barrels were then shipped to Portugal and filled with Malmsey wine—an exceptionally sweet variety of Madeira made from the Malvasia grape. The Malmsey-laden casks matured in the heat of Madeira’s sun for two years before being emptied, shipped to the Scottish Highlands and filled with bourbon barrel-aged single malt. Two years later, the Bacalta went into bottle at 92 proof.

At first whiff, honeycomb and apricot aromas assert themselves. Ah, but keep on sniffing and you’re likely to detect mineral notes and white chocolate shortbread cookies. On the palate, baked apple and apricot flavor come straight away, followed by marzipan, candied dates, fresh melon, and a wee bit of white pepper spice. Mouthfeel is gratifyingly warm and a bit oily. Bacalta finishes with a flourish of tropical fruit, bolstered by pleasant chocolate and evergreen notes. Overall, it’s a complex and very flavorful whisky that, like its forebear, is sure to become a collector’s item. (glenmorangie.com)