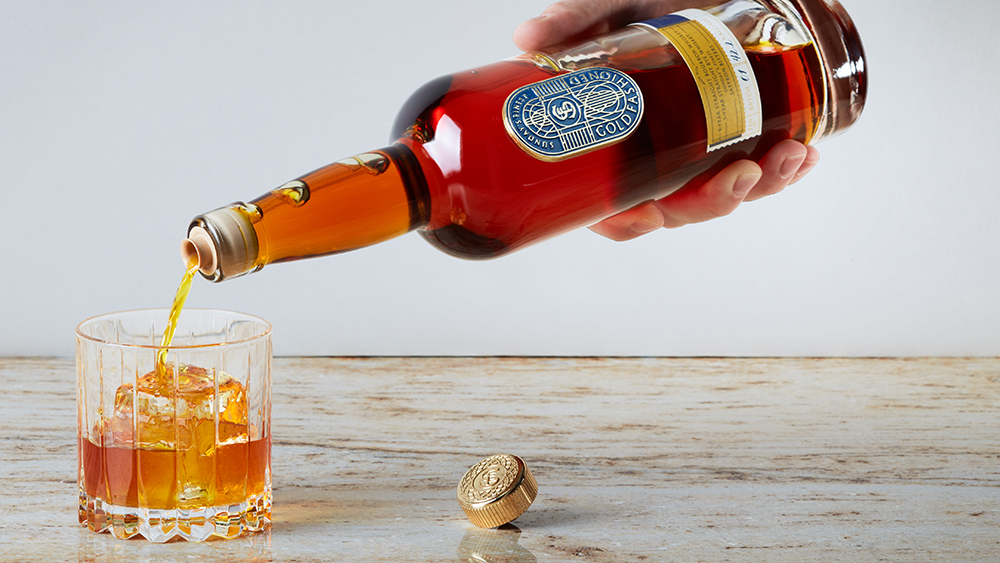 Forget spiked seltzer or a canned G&T. What about some liquid gold—or Gold Fashioned, at least? The wittily named new limited edition from Chicago-based Sunday’s Finest is an ultra-luxury alternative to those ready-to-drink also-rans. “I don’t think there’s a cocktail better suited for a ready to drink preparation than the Old Fashioned—it’s the primordial drink, the original cocktail,” says founder Robby Haynes, who earned accolades via his stint at one of the city’s top bars, Violet Hour, “I truly believe you can create one like this that’s as good as anything you could get at a bar.”

Certainly, he hasn’t skimped on the raw ingredients. Haynes splits the whiskey base between an eight-year Kentucky Bourbon, and a five-year old rye from Indiana, a trick he picked up from his bartending days. “You get a much more complex, dynamic spirit profile—a nice spice character that’s also assertive and has some backbone. It makes it an exceptional sipping cocktail,” Haynes promises. He also devised custom bitters expressly made for this recipe, macerating a raft of premium herbs and spices for a proprietary blend: think Afghan saffron, Tahitian vanilla, Ecuadorian cacao and French Alp-harvested gentian root, among others. The pre-batched drink even comes with an atomizer containing orange zest; one quick spritz will act much like a twist of fresh rind. Even the bottle has been designed to turn even amateurs into pro-barkeeps—or at least help them pretend—with its no-drip spout; serve it over a large cube of ice, as Haynes recommends.

He started mulling the idea of this upscale ready-to-drink blend during the pandemic, as bars were shuttered and drinkers primed to experiment with cocktails at home, or order them to go for the first time. “When the world is topsy turvey, and a little stressful, a nice cocktail to just pour in a glass does wonders for the psyche,” Haynes says. He isn’t alone, either: Other top-flight bars stateside have launched full-sized, ready-to-drink lines in response (see the large format pre-batched drinks from New York’s Dante, for instance). What sets Sunday’s Finest apart, though, is its strict limited edition; Haynes says that he has only raw materials enough for around 9,000 bottles. After that, the Gold Fashioned is consigned to cocktailing’s Hall of Fame. “To me, it’s a creative expression of all I think a cocktail could be and I don’t think I’d be looking to repeat that.”