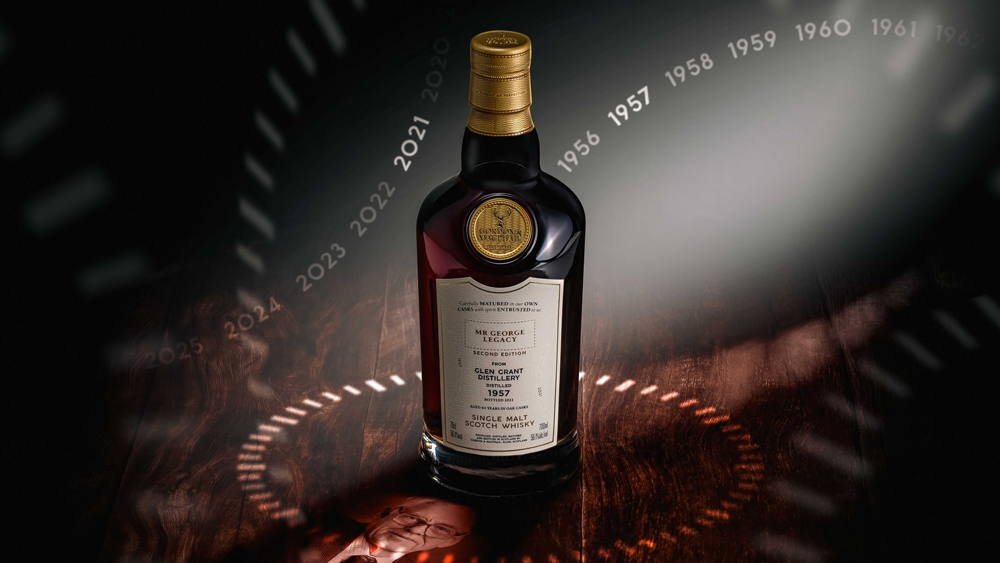 This new ultra-aged whisky from Gordon & Macphail might not be Macallan-level old, but admittedly few are. However, at 64 years old, the second edition of the company’s Mr. George Legacy series is certainly no spring chicken.

Gordon & Macphail is an independent bottler, meaning it sources whisky from various distilleries throughout Scotland, some of which is fully mature and some that is further aged in its own warehouses. The whisky series is named after George Urquhart, a member of the second generation of the family that owned the company who is credited with helping popularize single malt scotch around the world. In the case of this new release, the whisky was distilled on October 10, 1957 at Glen Grant, and spent its entire life in one cask—No. 3,483, a first-fill sherry butt. It was ultimately bottled on November 9, 2021 at cask strength of 56.1 percent ABV, which is relatively high for such a lengthy maturation period.

“Local to us in Speyside, Glen Grant was the first distillery to use a purifier in distillation which resulted in a lighter spirit,” said Stuart Urquhart, grandson of Mr. George and Gordon & MacPhail’s operations director, in a prepared statement. “Back in the 1950s, the spirit would have been slightly smoky due to floor maltings and a small level of peat being used—which is a style rarely seen in today’s modern Speyside whiskies—giving this whisky a charred oakiness that is perfectly balanced by long-term maturation in a Sherry cask made of American oak.”

Tasting notes include fruitcake, baking spice and orange marmalade on the nose, with a mixture of cherry, tobacco, mint and a touch of anise on the palate. “This is a gorgeous whisky, rich and multi-layered, still vibrant and vital in spite of its great age,” said whisky expert and author Charles Maclean in a press release. “A worthy tribute to the man who first drew the world’s attention to the glories of single malt—Mr. George Urquhart.” Just 298 bottles are available at a suggested retail price of £6,000, which may vary from market to market. Remember, while old doesn’t necessarily mean good in the world of whisky, Gordon & Macphail is a reliable source of high-quality single malt scotch, regardless of its age.