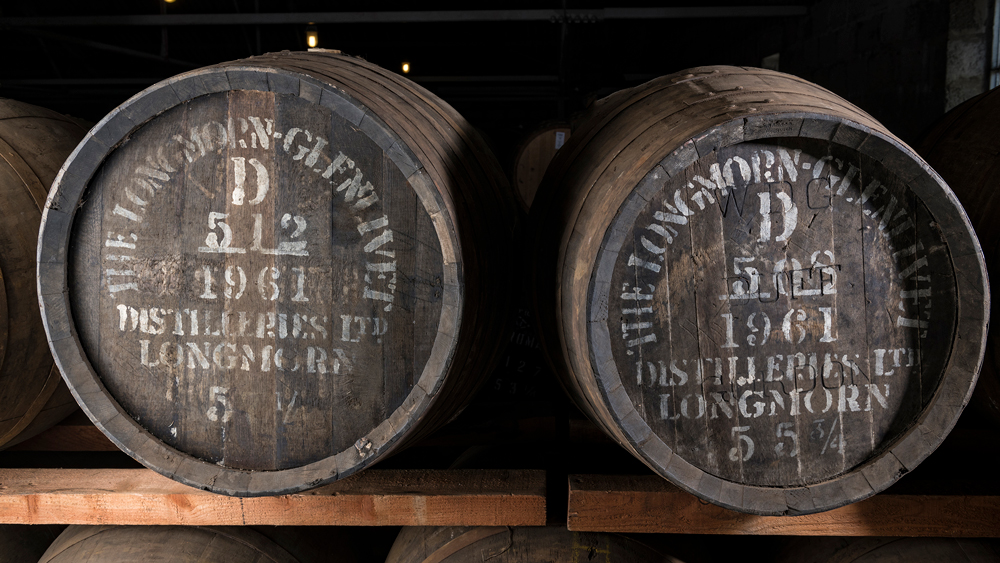 Way back in 1961, George Urquhart—the second generation owner of noted scotch whisky purveyors Gordon & MacPhail—filled two first-fill sherry hogsheads with an identical new-made distillate from the Longmorn Distillery. Curious to see how these “whisky twins” would mature in slightly different wood environments, Cask #512 was made of American oak, while Cask #508 was constructed of European oak.

By coincidence, George became the proud grandfather of identical twins twenty years later, both of whom have since joined the family business. Richard Urquhart has become the international sales manager, Asia & Americas, while Stuart, his slightly younger brother (by about thirty seconds) is now associate director of whisky supply.

Just as the twin brothers have matured over the decades, so had the twin barrels of whiskies, aging side by side in Gordon & MacPhail’s warehouse. And like their human counterparts, the whiskies were affected by environment and location and thus had been developing their own individualities. Curious about their liquid spiritual alter-egos, Richard and Stuart decided to bottle their counterpart whiskies on February 2, 2018, as part of Gordon & MacPhail’s Private Collection of rarities from cult distilleries, with Richard selecting Cask #508, while Stuart chose Cask #512.

Like the twin brothers, each of the twin whiskies, while having the same DNA, had matured differently and yet, each cask bore a somewhat subtle similarity to the brother who selected it. Richard’s Cask # 508 is stronger and slightly more robust and outgoing, while Stuart’s Cask #512 is drier, with a spicy undertone that perhaps reflects his sense of humor. Focusing strictly on the whiskies, Cask #508 exudes more of a heavier sherried influence intermingled with nuances of roses, apricots and peaches, while the slightly lighter-hued Cask #512 carries more earthy floral oak notes with a hint of citrus.

Presented in hand-blown, identically-shaped twin crystal decanters, only 97 individually numbered sets, each priced at $38,000, are available. Each two-decanter set, containing whiskies from Cask #508 and Cask #512, is accompanied by an informational book written by whisky specialist Jonny McCormick, along with a certificate of authenticity personally signed by the brothers.

Both whiskies have been bottled at cask strength, with Cask #508 clocking in at 90 proof while Cask #512 was 81.6 proof. In both cases, these 57-year-old single malts represent the oldest Longmorn whiskies ever bottled. Befitting their complexities, they should be allowed to aerate in a snifter for at least half an hour after pouring, in order to bring out the full spectrum of their flavors. And as both brothers are keen yachtsmen, it would be a fitting tribute to add just a splash of water before taking that first sip.