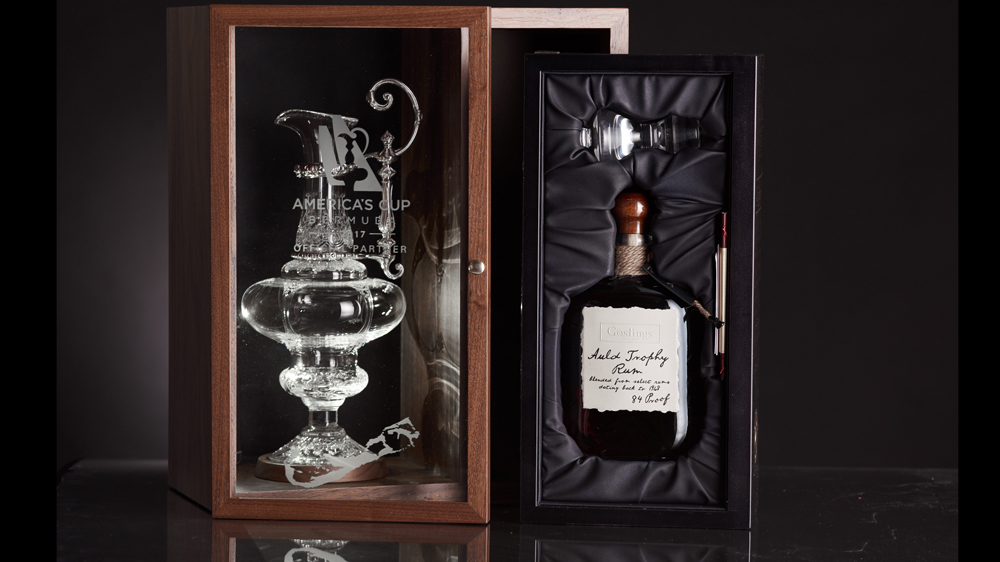 The 35th quadrennial America’s Cup—the world’s premier sailing regatta—is now history (with New Zealand having wrested the Cup from the reigning United States team), but those still seeking a souvenir of the event should look to Bermuda, the host country for this year’s race. Goslings, the first and last word in Bermudian rum for more than two centuries, has teamed with America’s Cup to produce the rarest, most elaborate, and most limited-edition package in its history.

The Goslings 2017 America’s Cup Trophy Rum and Decanter Ensemble ($10,000) features its Auld Trophy Rum, a blend of Jamaican pot-still and column-still rums (Goslings imports its rum from throughout the West Indies), dating back as far as 1968. The 49-year-old rum—the oldest in the Goslings warehouse—had been aged an estimated 10 to 12 years before being stored in glass flagons. Prior to blending and bottling, it was aged a further six months in first-fill bourbon barrels previously used to mature Goslings Old Rum, their extra-aged blend. The final product is astonishing, with an earthy, slightly grassy aroma. On the palate it’s rich and smooth, with deep notes of caramel underscored by a distinctive funkiness from the pot-still rums. The finish is long and dry, with an oaky spice featuring hints of tobacco.

The bells and whistles in the package are as noteworthy as the rum, especially the crystal decanter created by Dartington Crystal in the United Kingdom. It’s a replica of the Auld Mug trophy awarded to the America’s Cup winner. A certificate of authenticity, a tasting journal, and a booklet signed by Malcolm Gosling Jr. describing the provenance of the rum are also included. It’s all housed in a handsome walnut box.

Only 166 bottles of Auld Trophy Rum have been produced—one for each year since the first America’s Cup. At present, it’s only available for purchase in Bermuda, though international shipping is possible; call 441-298-7348 for more information. For devotees of both sailing history and rare rums, however, it’s worth booking a flight.

This New Irish Whiskey Was Aged in Guinness Beer Barrels, Because of Course It Was