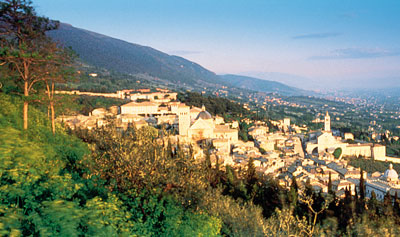 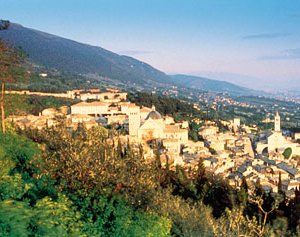 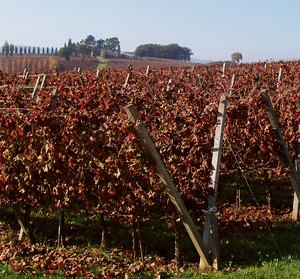 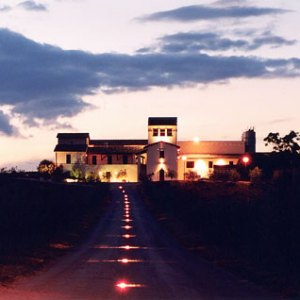 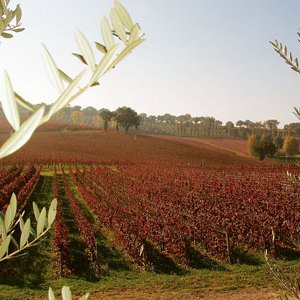 Judged solely on his youthful appearance and alliterative name, Valentino Valentini seems as though he should be waiting tables in a Los Angeles trattoria while awaiting his big break. Instead, the 31-year-old is serving his second term as mayor of Montefalco, an Umbrian village that dates to the height of the Roman Empire and now sits at the epicenter of Italy’s most exciting viticultural movement. “Sagrantino is the story of Montefalco,” says Valentini, as he raises a glass of the ruby elixir inside a neighborhood enoteca, “a wine of legend that is famous in the region.”

Valentini’s toast helps explain why so few people are familiar with Sagrantino: The region in question, Umbria, is itself not very famous.

Landlocked in central Italy, Umbria has languished for centuries in the shadow of Tuscany, its culturally and viticulturally superior neighbor to the northwest. The region has no major cities to attract tourists (most of whom view it only from airplanes as the green space between Venice and Rome), and it has been known in the wine world primarily for its merely pleasant white varietal, Orvieto. But Umbria–which is dotted with Roman ruins, hilltop medieval towns such as Assisi and Foligno, and rows of olive trees and fiery red—leafed vines–is gaining favor with oenophiles and gourmands. The region is a preferred source for black truffles and extra-virgin olive oils, and if Valentini and his townspeople have their way, it will remain the only source for the robust wines made from the Sagrantino grape.

Il Bacco Felice is a convivial, small-town enoteca offering superb food and wine in an intimate yet playful atmosphere. Any section of wall not hidden by books or bottles is marked with colorful graffiti, nearly all of which expresses adulation for chef and owner Salvatore Denaro.

Denaro is Il Bacco Felice, or the Happy Bacchus, and he frequently joins his guests to share in a meal, pour the wine, and tell stories of his pigs. Rabbit casserole is his specialty, but he also serves wonderful prosciutto, cheeses, and breads. While his wine list includes a range of Italian and international varietals, Denaro’s preference is for the local grape. “Sagrantino is like the truffle of the wine world,” he says. “Here in Umbria, we pair it with meats and cheeses because it is a rich and elegant wine, but we also enjoy it alone. We feel that it is a superior grape and one, like a beautiful woman, that ages with grace.”

At this eatery on a winding road that leads from Baschi to Todi, teams of tuxedo-clad waiters dash around tables while they deliver one of Italy’s most celebrated dining experiences. Chef and owner Gianfranco Vissani has a reputation for creativity and obsessiveness, characteristics that have helped place him on nearly every critic’s short list of the country’s most influential chefs. Vissani prefers brief cooking times that reveal the brightest flavors in dishes such as lasagna chiffonade with black olives and onions; red partridge with gnocchi of chicken liver and black olive sauce; and bass folded in baby marrow leaves with ricotta, anchovy, and orange and star aniseed sauce. Tasting menus can reach 12 courses at Vissani, but you need not fret about time: The chef does not host a second seating, so the table is yours for the night.

High in sugar and acid content, Sagrantino can be the basis for rather rude red wines. But with the proper attention, this diminutive yet vigorous grape can produce bold, complex vintages that are laced with fierce but controlled tannins. On this night at the village enoteca, Valentini is raising a glass of one such expression of Sagrantino: Arnaldo Caprai’s 2001 Sagrantino di Montefalco 25 Anni. Sitting next to the mayor is Marco Caprai, the CEO and winemaker of the Montefalco-based winery, who almost single-handedly has changed perceptions of the Sagrantino grape. “I knew that one day my wine would be praised for its exceptional quality,” says Caprai. He is entitled to boast: His 25 Anni is one of Italy’s best red wines.

Created in 1993, 25 Anni was released in 1996 to celebrate a quarter century of the Arnaldo Caprai winery. The wine was an immediate sensation among critics, many of whom lavished 90-plus ratings on the deeply colored, elegantly structured Sagrantino. Caprai’s premium bottling has required more time to register with consumers, but the 25 Anni–along with Sagrantinos from Umbrian producers such as Antonelli, Còlpetrone, and Adanti–has experienced a relatively rapid rise for a wine based on a grape that has existed in obscurity for at least 400 years.

Historians are unsure where Sagrantino originated–some believe it is indigenous to Montefalco; others hold that followers of St. Francis of Assisi brought the vines from Asia Minor–but the first written mention of the grape in Umbria dates to the 16th century. Until quite recently, however, Sagrantino wines rarely were exported outside of Umbria–and with just cause: They were not very good.

Traditionally, Umbrian vintners harvested Sagrantino grapes to produce passito, a rough but sweet concoction (though not a dessert wine) that never ventured much farther than local dinner tables. During good years, the highly tannic wine could have been called rustic, and during bad years, simply common. It never compared to Sangiovese (which brought some notoriety to Umbria in the 1970s and remains the region’s most widely planted red grape), and it could not stand up to nearly anything from Tuscany.

When Marco Caprai’s father, Arnaldo, founded the family winery in 1971, the area around Montefalco was home to only five commercial producers of Sagrantino. Gradually, these pioneers developed the wine to the point where Sagrantino di Montefalco received denominazione di origine controllata (DOC) status in 1979. Still, the varietal was far from noteworthy when Marco joined the winery in 1987.

The younger Caprai believed that Montefalco’s mysterious grape had potential that remained untapped. “There hadn’t been any real research into Sagrantino,” he recalls. Shortly after joining the family business, Caprai hired winemaking consultant Attilio Pagli, who was known for his Chianti Classicos from Tuscany. The two winemakers worked with the University of Milan to develop ways to coax a flavorful, balanced, dry red wine from the Sagrantino grape. And coax they did.

Led by Caprai’s efforts, Sagrantino di Montefalco earned the highly valued DOCG status (the final letter stands for garantita, or guaranteed) in 1992. This recognition, which elevated the wine to a tier alongside Chianti Classicos, and the creation of 25 Anni the following year marked significant breakthroughs for Sagrantino. The wines became subject to strict controls, ensuring that any bottle bearing the Sagrantino di Montefalco name adhered to principles established by Caprai and his peers. Today, in a sign of Sagrantino’s growing popularity, Arnaldo Caprai refers to nearly 50 Montefalco-area wineries as its peers.

Alas, popularity breeds competition. And, not surprisingly, competition in this case may be coming from Tuscany. Caprai claims that, due largely to his achievements with Sagrantino, Tuscan wineries have “adopted” the grape and are beginning to plant vines. In an effort to prevent Sagrantino’s spread outside Umbria, Caprai and Mayor Valentini have submitted a petition to the Italian government that calls for restricting the varietal’s planting.

Just which Tuscan producers, if any, are planning to produce Sagrantino is unclear, but Caprai insists that those wineries will benefit unfairly from his and others’ hard work. “This is not just a grape, and it’s not just a name,” he says. “It’s an identity. And part of what Montefalco and Umbria base their identity on is the wine made from the Sagrantino grape.”

Indeed, Umbria’s identity has benefited greatly from Caprai’s gains with the Sagrantino grape. Sagrantino still does not command the same recognition abroad as does Barolo or Barbaresco, but the recent surge of premium wines from Montefalco has brought respect to Umbria’s wine industry and has had a ripple effect throughout the region. Umbria’s rosso blends of Sagrantino, Merlot, and Sangiovese are attracting followers, as are white Grechettos and even passitos, which Montefalco wineries are reinventing to suit modern tastes. Arnaldo Caprai, for instance, ages its passito for 18 months in French oak barrels to produce a medium-sweet wine.

“This type of experimentation has now become common throughout Italy,” says Sergio Esposito, co-owner of New York’s Italian Wine Merchants, which specializes in building the libraries of Italian-wine collectors. “Italy has about 2,000 grape varieties, but after World War II there was a major shift to just forget about the low-yielding ones.”

According to Esposito, Caprai deserves much of the credit for reinvigorating Italy’s lesser-known grapes. “He has certainly been the trailblazer to bring Sagrantino to the forefront,” says Esposito, “and it’s very good for Italian wines. The challenge is to be unique and to stand out, and Caprai has done just that. He has really set the standard.”

Although the best known of Umbria’s Sagrantino producers, Arnaldo Caprai remains relatively obscure beyond the region. Caprai’s 2001 Sagrantino di Montefalco 25 Anni ($100), which debuted in 1996 to celebrate the winery’s 25th anniversary, is a complex, jammy red with flavors of dark fruit and toasted oak. Like a Barossa Valley Shiraz or a Napa Valley Cabernet Sauvignon, the 25 Anni demands bold food. The Arnaldo Caprai 2000 Collepiano Sagrantino di Montefalco ($49) is an even more powerful expression of the grape, but it lacks the finesse of the 25 Anni.

Filippo Antonelli is one of the few producers in Montefalco making the Sangiovese-based rosso riserva. His version contains greater-than-typical percentages of Sagrantino, and the 2000 Montefalco Rosso Riserva ($40) is an expertly balanced blend with brilliant fruit flavors.

One of the region’s fastest-growing wineries, Còlpetrone has more than 100 acres planted in Montefalco. Its 2001 Sagrantino di Monte­falco ($69) is a full-bodied wine with intense cherry and cinnamon flavors. +39.0578.767722,

Owned by Guido Guardigli, who studied Sagrantino as a winemaker at Còlpetrone and Scacciadiavoli, Perticaia is one of Montefalco’s newer estates. Its 2000 Sagrantino di Montefalco ($56) is a rich, firm, 14-percent-alcohol wine that finishes with flavors of toasted oak.

The Adanti family winery is outside of Montefalco in the medieval town of Bevagna. Amid its ancient and rustic surroundings, the winery uses modern equipment to blend Sagrantino with Merlot and Sangiovese to produce a wonderfully balanced Montefalco Rosso.

Paolo Bea’s family has been a fixture in Umbria since the 1500s, and the winemaker relied on traditional methods to produce his exceptional 1999 Sagrantino di Montefalco Secco “Pagliaro” ($75), which was bottled without fining or filtration. He also makes an excellent passito, the sweet wine traditionally associated with the Sagrantino grape.

A small producer with a substantial reputation, Scacciadiavoli proves that Sagrantino does not have to be overpowering to be good. Its 2000 Sagrantino di Montefalco ($42) may be considered light by some standards, but it is a well-concentrated, tart wine that is a pure expression of the grape and its appellation.