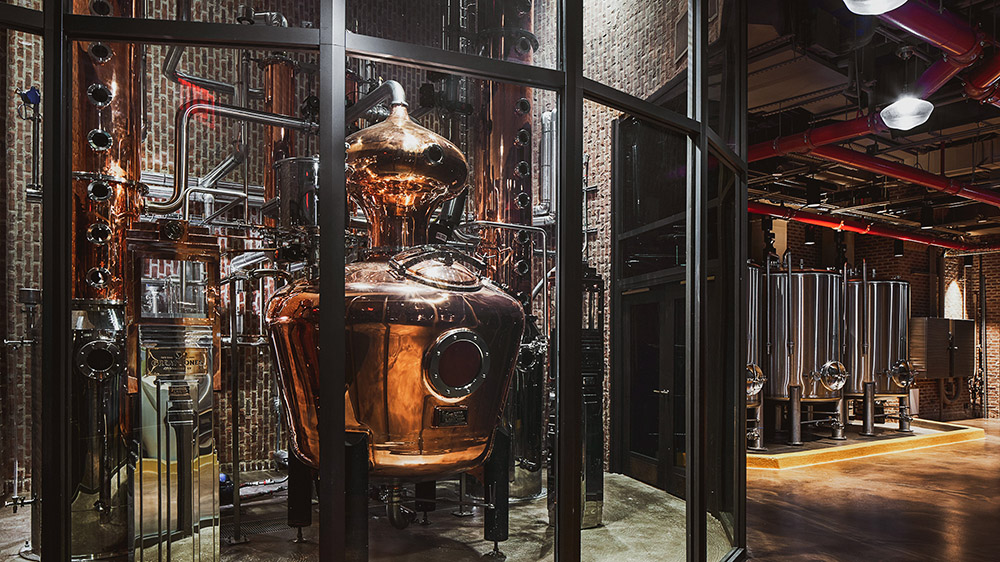 It’s taken over a century, but the Big Apple finally has itself another whiskey distillery.

This past Saturday, the Great Jones Distilling Co. opened its doors to the public in Manhattan’s NoHo neighborhood. It’s the borough’s first since Prohibition, a time when visiting a distillery was a much different (and illegal) proposition. But the building is more than just a place where whiskey is made, it’s a carefully curated experience for spirits enthusiasts.

The journey begins when you step foot into the opulent Jazz Age-style atrium near the corner of Great Jones Street. Across the building’s 28,000 square feet and four stories, you’ll find an in-operation distillery, a restaurant, four distinct bars and a gift shop. You can take a tour of the distillery and follow it up with a guided tasting of the brand’s three spirits—a well-balanced straight bourbon, a complex four-grain bourbon and a peppery rye—while sitting at its elegant second-floor bar. Then, to close things off, you can buy a bottle of your favorite or all three (only the straight bourbon is available for purchase outside the distillery) on your way out the door.

Eventually, you’ll be able to do even more. The restaurant, which is run by executive chef Adam Raksin, will open next month with a contemporary American menu chock-full of New York state-sourced ingredients. The dining room bar will open at the same time, as well as a basement-level speakeasy located near where what’s believed to be old rum-running tunnel that was discovered during construction. At either bar you can enjoy any of the brand’s whiskeys, as well as a robust array of whiskey-based cocktails like the Truffled Manhattan, Jones Julep and, of course, classic Old Fashioned. You can also enjoy a drink in the third-floor lounge, which features a breathtaking view of the street below, and is well-suited for business meetings and private events.

Of course, despite all that razzle dazzle, the entire project, which is bankrolled by New Jersey-based Proximo Spirits, is about one thing—a deep love of whiskey. The Great Jones brand spirits being sold today started their life, six years ago at Black Dirt Distillery (which is also owned by Proximo) upstate in Orange County, New York. Now, the process is carried out in NoHo under the watchful eyes of head distiller Celina Perez and assistant distiller Jelani Johnson. Once distilled, the whiskey is put in barrels and sent to Black Dirt, where it will be aged from anywhere to four to five years.

“I love Manhattan. I moved to NYC 20 years ago and have never left,” Perez told Robb Report over email. “You could say that I love whiskey more and getting to make it here at Great Jones Distilling Co. in the middle of Manhattan is an honor. “

The whole operation is impressive, but the fact that the distillery even exists may be even more so. Proximo spent six years making Great Jones a reality. This included spending a year vetting each of the more than 120 buildings that were zoned for distilling alcohol in Manhattan before finding the right location (while it is the borough’s only whiskey distillery, The New York Times points out that Our/New York vodka distillery has been around since 2018). Unfortunately, that was far from the only obstacle the team faced during the project.

Another local ordinance that prohibits distilling above the second floor necessitated lowering one floor a full five feet. A two-story explosion-proof glass chamber was also constructed to house the distillery’s 500-gallon copper pot Vendome still, just to be on the safe side. Then, because delivery trucks are banned from Great Jones Street, barrels of whiskey have to be carried by forklift at select times of the day to transportation waiting on another street. Oh, and there was the Covid-19 pandemic, which delayed the opening by a year. Just to get to this point, the team had to be incredibly agile and flexible, meeting each new challenge with an open mind.

“Every time a single and simple switch was made to one floor, the whole layout changed, making this what I considered to be a ‘living space,’ constantly adapting to what was required in the moment,” Andrew Merinoff, the project manager, told Robb Report. “Ultimately, we had 6,000 floor plans. We can confidently say that we wrote the playbook for what it takes to debut a project of this scope in Manhattan.”

Is Great Jones Distilling Co. going to replace your favorite Manhattan watering hole? Probably not. But if you’re looking for a way to liven up a weekend night and add some variety to getting drinks with friends, you’ll want to add it to your New York checklist.