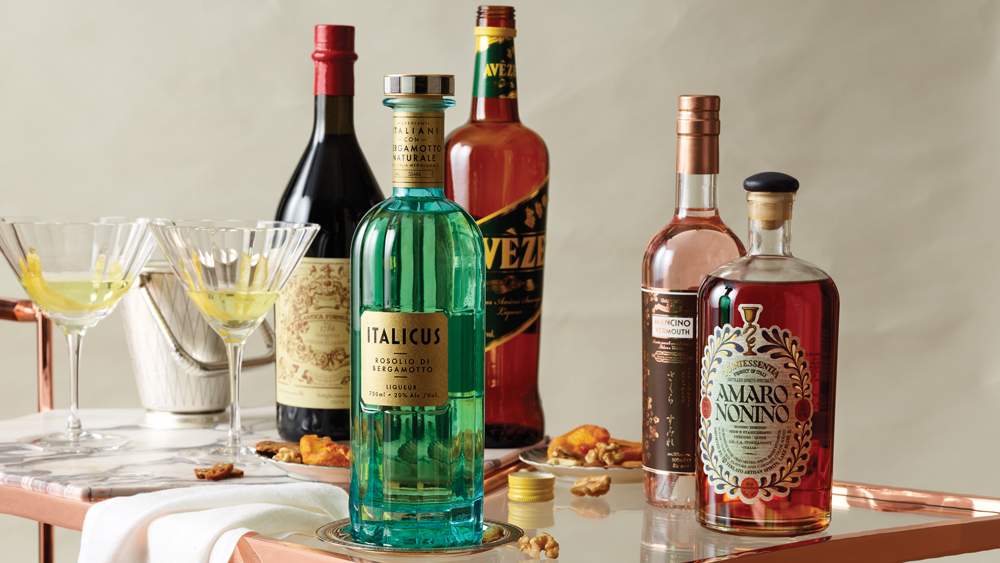 No matter how much preparation goes into a dinner party, invariably something will go wrong. It could be anything from an oversalted fish or an overlooked vegan to that uncle who always goes one note past appropriate. When calamity rears its head, the surest safeguard against guests rising up in revolt is liquor—the good stuff, and plenty of it. The following collection of spirits will help keep your guests buzzing from the moment they arrive until the final Uber is called.

White wines from Sicily and the Romagna and Puglia regions form the base of this celebrated Italian vermouth, a perennial favorite among the world’s elite mixologists. Carpano Antica Formula has been around since 1786, and in all that time the recipe has never changed. The key ingredient: vanilla from the tropics that imbues the vermouth with its signature taste. Bitter orange, saffron, and cocoa are prominent flavors as well. Boasting both appetite-stimulating and digestive properties, it’s a delicious dual threat. ($30)

From the 1500s until the 19th century, when it was summarily banned in the royal house by Sardinia’s vermouth-loving King Victor Amadeus III, the liqueur rosolio was one of the most popular drinks across what we now call Italy. A few years ago, a Salerno-born bartender revived the original aperitivo using an age-old process called sfumatura, in which bergamot oranges and lemons are pressed in cold water to release their natural oils. Botanicals are added to the mix, then fortified with neutral grain spirit and beet sugar. Italicus is citrusy, floral, and slightly bitter, best enjoyed with equal parts prosecco over ice. ($45)

Since 1929, this classic French liqueur has been made with wild yellow gentian culled from Volcans d’Auvergne regional park. With intense herbal notes and in-your-face bitterness, accented by anise and orange peel, Avèze is similar in taste to Campari; however, it brings a little something extra to the table with a crisp minty quality. The gentian works to stimulate the appetite and can also aid with digestion. Makes for a sublime spritz. ($28)

Renowned Italian bartender Giancarlo Mancino is enamored with Japanese culture, so he created a unique, limited-edition tribute: vermouth, the traditional aperitif of his homeland, built on a variety of Italian white wines and seasoned with Japan’s famous cherry blossoms, or sakuras, and violet petals. Originally available exclusively at the Mandarin Oriental Tokyo, Mancino Sakura has been popping up in select U.S. shops. You won’t find a more delicate and floral vermouth to complement a preprandial martini. ($40)

The Friuli, Italy–based producer Nonino may be best known for its grappa but—santo cielo!—does it deliver with this outstanding amaro. Aged five years in barriques, Quintessentia is amber-colored with deep red hues. It leads with seductive scents of herbs, spice, and licorice, and possesses a distinctive velvety mouthfeel. This limited-production amaro brims with woodsy flavor tinged with just the right amount of bitterness to prime the palate before a meal. Best enjoyed neat at room temperature. ($50)

It takes about 80 years for the water used to make this smallbatch gin from New Zealand to travel through layers of sediment before being released into an aquifer at the base of the Southern Alps. So, in a way, this is your grandfather’s gin. With its vibrant citrus-forward flavor profile, Scapegrace lends itself to a range of dishes, from Vietnamese duckand-papaya salad to oily meats such as venison. The zesty orange and lemon notes also complement a salty halloumi cheese or a tangy buffalo mozzarella. ($60)

This beautiful tequila is soft and smooth, meant to be enjoyed and savored as if it were wine: Serve it neat in a Champagne flute. With hints of vanilla and spiced undertones, Casa Dragones Joven is a favorite of the titans of the culinary industry. Eric Ripert of Le Bernardin pairs it with chocolate; Scarpetta’s Scott Conant prefers it with Piave Vecchio; and Martha Ortiz of Dulce Patria in Mexico City has served a special cocoa mole alongside Joven. Even José Andrés has gotten in on the action with his American Caviar Cones and Joven at the Bazaar in Los Angeles. OK, Top Chef wannabe, it’s your move. ($285/375 mL)

Tequila Fortaleza is made the old-fashioned way—agave cooked in a small brick oven, a tahona to squeeze the juices, wood-tank fermentation, and ancient copper pots for distillation. The resulting reposado is one of the world’s tastiest tequilas, highlighted by flavors of apple, vanilla, and cinnamon. It finishes long with considerable spice. Pairs well with savory meats and soft-shell crab. ($65)

As the name implies, this chestnut-colored bourbon was crafted with a specific style of cuisine in mind. Like his father, the late great Booker Noe, Beam-family master distiller Fred Noe routinely hosts backyard barbecues at his home in Bardstown, Ky., pairing his dad’s namesake bourbon with grilled meat—bold, flavorful meat, that is, because at 128.8 proof, Backyard BBQ will lay waste to flimsy fare. Fred’s signature dish: sizzling flambéed pork chops with Booker’s-infused barbecue sauce. ($70)

Polish-born Chopin is known for its vodkas, but the brand has tried something new with the creating of Single Young Potato. Though it’s clear, technically it’s not a vodka—vodka must be distilled three times to qualify for its moniker. This spirit has been distilled just once, and, as its name implies, is made from young potatoes. This is incredibly flavorful and just as ideal for sipping as it is for mixing, particularly if paired with a side of baked, mashed, or dauphine spuds. ($75/375 mL)

Reyka sources its water from an arctic spring that cuts through a 4,000-year-old lava field, then filters the grain distillate through lava rocks. All that volcanic influence results in an Icelandic spirit that is clean, flavorful, and impeccably smooth. While it acquits itself admirably in a martini, Reyka is a stellar sipping vodka that can ease guests into a meal. Pairs nicely with melon, tomato, deviled egg, and salmon. ($26)

This scotch has a beautiful floral intensity that makes it a wonderful companion for a meal. Matured in refill American-oak casks, The Light brims with notes of lavender, honeysuckle, caramelized pear, vanilla, and nutmeg. The smoky sweetness of the finish is sublime. ($300)

In Jamaica, where Appleton Estate has been produced for some 265 years, they don’t abide adding anything to this exquisite aged rum. No ice. No mixers. No nothing. They know what they’re doing, so you best follow their lead. As adult beverages go, you won’t find a finer dinner companion for jerk chicken than the Appleton Estate 21 Year Old. Its deep vanilla, rich nutmeg, warm coffee, and cocoa notes also shine with a dessert course such as chocolate coconut crème brûlée. ($134)

The Lagavulin 12-Year-Old cask-strength single-malt whisky from Islay with a light, oily body delivers a burst of licorice up front, followed by golden syrupy sweetness and a touch of fruit. Savory smoke pervades, with hints of gently drying grass. There’s plenty of depth and complexity to be enjoyed in this peated, earthy scotch, which shows a natural affinity for the intensity of salty and mature cheeses. Also well suited for robust pâté, air-dried sausage, and Parma ham. ($130)

Old Duff Genever Single Malt is one of only three 100 percent malt-wine genevers in the world to carry the prestigious seal of Schiedam, guaranteeing it’s old-school legit (during the first Golden Age of Cocktails in the late 1800s, most genevers were 100 percent malt wine). For hearty spiced meats such as pepper steak or lamb with rosemary, you can’t go wrong with a martini made with Old Duff. Or for a throughout-the-meal palate cleanser, swap genever for gin in a Tom Collins—a knockoff that Old Duff founder Philip Duff has dubbed a Phil Collins. ($35)

Drinking Fernet-Branca is like throwing on a Dolce & Gabbana dress—classic and alluring, with instant Italian street cred. For those less familiar with donning slinky dresses, think of the Fernet-Branca experience as akin to how the Italian-born icon Fabio must feel about turning 60 next year—awesome and bitter at the same time. There’s a reason this amaro is the go-to end-of-shift drink of bartenders the world over: The bitter herbal liqueur offers a much-needed kick at the end of a long night. It’s meant to be shot, but if you insist on additional components, have another shot and chase it with ginger ale. ($30)

The third expression in Wild Turkey’s Master’s Keep series comprises whiskies aged 12 to 15 years in oak and finished in casks that previously housed oloroso sherry for at least two decades. The heavily seasoned wood imbues this 101-proof Kentucky straight bourbon with dessert-like flavors, including cherry pie, toffee, and sweet tropical fruit. Once Revival settles in, it reveals a warm, slightly spicy character that soothes both stomach and soul. ($150)

As a general rule, if you’re going to drink something, know how to pronounce it. It’s Cynar (CHEE-nar), an amaro named for cynarin, a chemical component of the artichoke. And yes, there’s some artichoke flavor in there, along with lots of other good stuff from the garden.

An Italian entrepreneur named Angelo Dalle Molle introduced the brand in 1952, with the slogan “Cynar, against the stress of modern life.” Things don’t seem to have gotten any less stressful since then, but hey, that’s not the Cynar’s fault. ($30)

Established in 1270 in France, Frapin is one of the most enduring spirits producers the world has ever known. From winegrowers to distillers in Grande Champagne, the house has grown and evolved over the centuries thanks to 21 generations of the Frapin family. The Cuvée Extra is made from ancient reserves and aged in dry cellars for 40 years. This Cognac brims with intense flavors, including aged tawny port, tropical fruit, eucalyptus, cigar box, tobacco, and nutmeg. Its exceptionally long finish can be enjoyed to infinity. ($650)

This extra-añejo takes aged tequila to its limits by keeping it in the barrel for eight years. In this case that aging happened in two Taransaud French-oak barrels, known for their purity and small pore, allowing the tequila to develop with only a subtle influence from the wood. The very limited-edition result known as Casa Noble Selección del Fundador Volume II has elegant floral notes on the nose as well as white pepper, minerality, and hints of black cherry in the glass. ($1,500)

The regal bottle alone is a reason to break out this legendary Cognac for guests after dinner. But the spirit within is also worthy of kings, queens, and captains of industry. Made from nearly 1,200 of Rémy Martin’s finest eaux-devie, Louis XIII Cognac’s complex layers reveal a cascade of apricot, peach, and brioche that give way to leather, sandalwood, and nutmeg—a wonderful complement to postprandial cheese, sweets, or cigars. ($3,000)