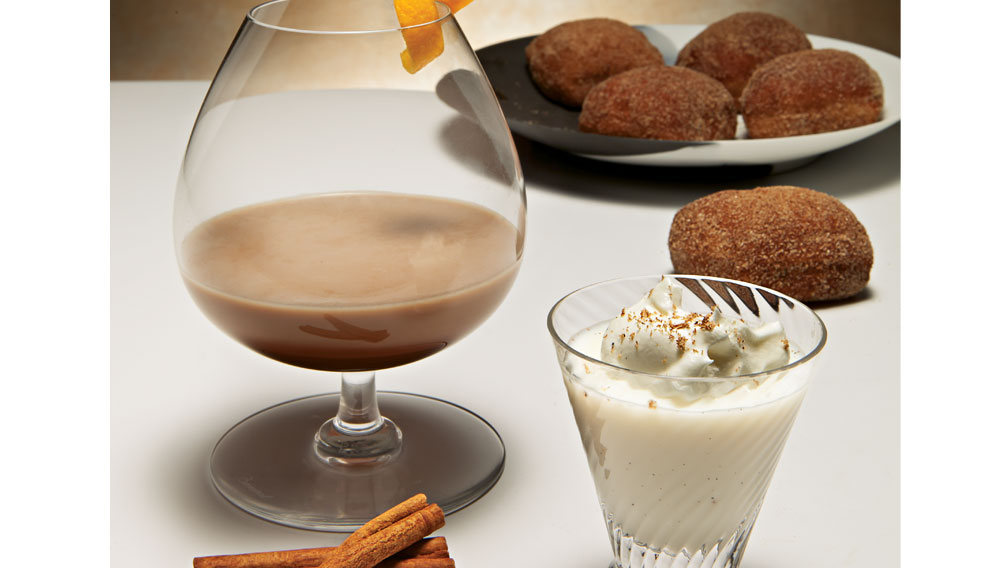 It was around the holidays, and pastry chef Karen Hatfield wanted something “fun” to serve with her desserts. “A more elegant version of eggnog, something rich and decadent, and kind of stiff,” she says. “A little something that would be good with beignets or cookies.”

Her solution was Vanilla Milk Eau-de-Vie, a pretty but potent partner to tender beignets. The idea sprang from her obsession with French milk jam—a cooked-down spread, thick as condensed milk but not as sweet, which is usually slathered on toast. For this cocktail, she reduces milk partway, then fortifies it with a good shot of Cognac. The result is indeed much more fun than the chocolate fondue that almost always shows up alongside beignets.

Nothing against chocolate, of course. Her Mexican Hot Chocolate was created for a special dinner of eight courses paired with cocktails, and served with a chocolate dessert. But depending on the crowd, this stirring winter drink could be dessert in itself. Hatfield is gifted at adapting homey comfort food to the menu of a luxurious restaurant, so this grown-up hot chocolate is served in a snifter, dressed up with a cinnamon stick and a twirl of orange zest. “I think,” she says, “it looks really sexy.”

Add the half-and-half, sugar, and cinnamon to a large saucepan and bring to a boil. Whisk in the chopped chocolate a little at a time, until melted and incorporated. (The chocolate base can be made ahead and kept warm or reheated just before serving.) Whisk in the vodka and Crema de Tequila until they are heated through; pour into a pitcher and keep warm. To serve, pour into brandy snifters and garnish each glass with a wide orange twist and cinnamon stick “straw.” Serves 15.

Nutmeg or cocoa nibs, for garnish

Add the milk and sugar to a medium saucepan. Split the vanilla bean, scrape the seeds into the pan, and add the pod as well. Over medium-low heat, slowly reduce the milk mixture by about 25 percent. Pass the mixture through a sieve. Add Cognac and serve in tiny glasses (it is quite rich). Garnish with a dollop of whipped cream and a small grating of nutmeg or cocoa nibs. The Vanilla Milk infusion may also be chilled until ready to serve: Reheat, add Cognac, and serve. Or serve the drink cold. Serves 8.

In a medium bowl, stir together the yeast, milk, and sugar. Let the yeast bloom (about 2 minutes), then add the remaining ingredients. Mix until combined, then knead for 2 minutes. Return the dough to the bowl, cover it with a clean towel, and let it proof in a warm place for 1 hour. Punch down and refrigerate for at least 3 hours and as long as 2 days.

Roll out the dough on a floured board to 1/2-inch thickness and cut into desired shapes. Proof again for 30 minutes. Fry the dough in 375-degree oil until golden brown. Roll the beignets in a mixture of cinnamon and sugar, and serve warm. Serves 8 to 12.