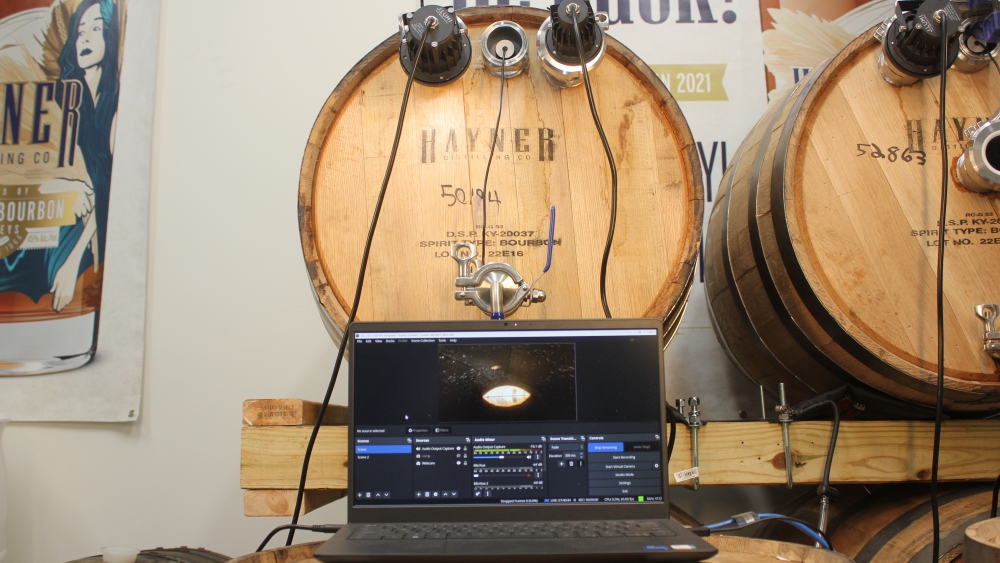 An Ohio distillery is offering a singular experience that’s the boozy equivalent of watching paint dry.

Hayner Distilling Co. has launched its Whiskey Webcam program in which subscribers can choose a barrel of whiskey and live stream the inside as it ages via webcam over the course of four to six years. This is definitely for whiskey fans with a surplus of patience.

Hayner is a revival of an old Ohio whiskey distillery that was founded in 1866 but didn’t survive Prohibition. The brand relaunched a few years ago and now works with Kentucky’s Bardstown Bourbon Company to blend its whiskey based on a sample from an original Hayner bottle. The core expression consists of 13-year-old Kentucky bourbon (40 percent), 4-year-old Bardstown Bourbon Company bourbon (25 percent), 4-year-old MGP bourbon (20 percent) and 3-year-old BBC bourbon (15 percent). Hayner is also contract distilling new whiskey at BBC, and the two barrels in question for this Whiskey Webcam program were produced there—a four-grain bourbon and a high rye bourbon.

Here’s how it works. Interested parties will pay $149 to subscribe to Hayner’s Whiskey Webcam—$139 at first, and then another $10 in four to six years to get your bottle of bourbon. Along the way, you’ll get a sample every year to try, 24/7 access to the webcam and other gifts like t-shirts. According to Hayner, the camera is sealed inside a port on the top of the barrel and LED lights are used to illuminate the inside without emitting UV rays that could be harmful to the whiskey. The barrels are aging onsite at Hayner in Troy, Ohio, not at BBC in Kentucky.

“The concept was honestly generated while drinking bourbon and trying to find a way to differentiate ourselves in the crowded bourbon market,” Hayner co-founder Greg Taylor told Robb Report via email. “We really do think of whiskey as an experience, and first thought we would just send samples over time to customers. But that was not very engaging, so we tried pictures, and finally, by accident, found we could position a webcam to look inside the barrel. Once we perfected the webcam process we began developing the marketing concept of Whiskey Webcam.  We do believe this is the world’s first live stream video from an aging whiskey barrel and we have filed for a patent to protect our work. We know it’s a little gimmicky, but that’s a big part of marketing.  But, at the same time, we believe in the unique experience this will offer customers.”

If you’re ready to commit the next four to six years of your life to watching the inside of a barrel of bourbon, you can contact the distillery directly via the website. There’s only so much liquid inside a barrel, especially as the angels drink their share over the years, so just 125 people will be able to sign up per cask. If you want to see this bourbon baby all the way through to its birth, sign up now.