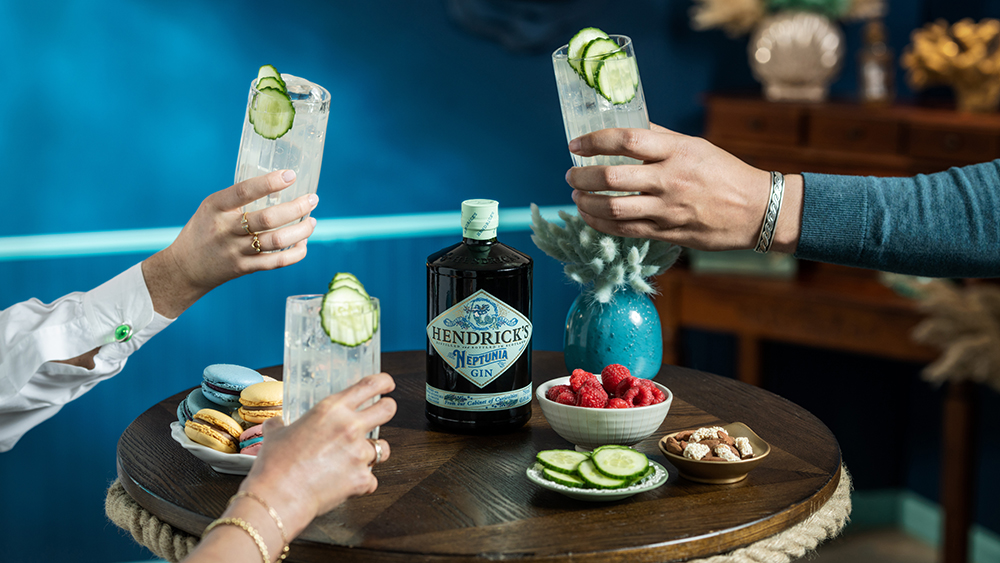 Hendrick’s wants to make waves with its latest release.

The Scottish distillery has just unveiled a new limited-edition gin inspired by the magic of the ocean. Fittingly named after the God of the Sea, Neptunia was created by master distiller Lesley Gracie at Hendrick’s Gin Palace on the rugged Ayrshire coast of southwest Scotland. Gracie oft strolls the distillery’s nearby beaches and sought to encapsulate the essence of the sea within this new expression.

“Most of my creations are based on memories—I play around with botanicals and combine them to recreate certain sensations,” the master distiller said in a statement. “Hendrick’s Neptunia for me is that freeing feeling of the sea bottled in a gin.”

Hendrick’s Neptunia can be paired with an immersive Magic-of-the-Sea spa kit.  Hendrick's Gin

The sea-inspired gin is a blend of unique coastal botanicals and a crisp citrus finish. Versatile by nature, Hendrick’s says it can be mixed with tonic or used in highballs, but it’s perhaps best enjoyed neat.

“You have that distinctive fresh character from coastal herbs, depth of flavor from the sea botanicals and an unmistakably clean, bright citrus finish that lifts in a round, refreshing way that makes it Hendrick’s,” Gracie said.

The spa kit includes headphones through which you can listen to the noises of the sea.  Hendrick's Gin

To mark the release, Hendrick’s is also offering a special Magic-of-the-Sea spa kit to bring the restorative quality of the ocean directly into the home of gin connoisseurs. The kit comes with a projector to create an underwater atmosphere and headphones through which you can listen to the sounds of the sea. It also includes an exfoliating face mask made from Scottish seaweed and rose that helps to cleanse impurities, as well as an aromatherapy candle that promises to evoke the Ayrshire coast. To top it off, you’ll receive a couple of highball glasses and octopus-shaped cocktail stirrers, so you can enjoy this immersive experience with a tipple in hand.

Hendrick’s Neptunia is priced at $42 a bottle.  Hendrick's Gin

Hendrick’s Neptunia, which has an ABV of 43.4 percent, will set you back $42 and can be ordered at Drizly. The spa kit, meanwhile, can be bought at the Hendrick’s Tiny Shop and all proceeds will go to Project Seagrass to help with the conservation of seagrass meadows.