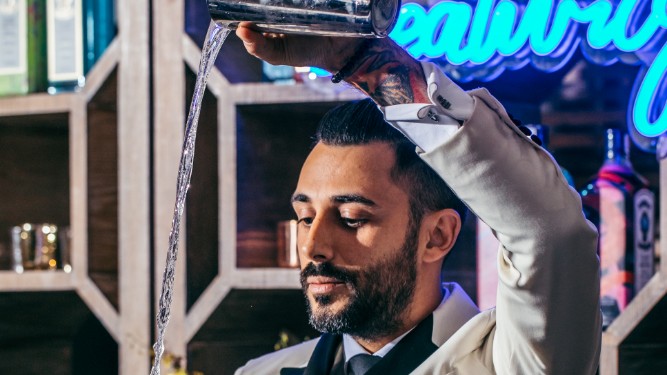 Leave it to a competition to tame the wild bartender. It’s an early February morning in Chicago, and instead of comparing tattoos and customer horror stories, the subject in this car is orris root and the sugar content of licorice. There was no late partying the night before. This well-rested group of mixologists are on their way to the first of three challenges to win the title of Bombay Sapphire’s Most Imaginative Bartender, and the accompanying $25,000 prize.

We arrive at Salvage One, a cavernous vintage furniture store, where bars, tables and couches from different eras are as varied in style as the 12 finalists from across the US and Canada—some casual, some dressy, some vintage. They have 20 minutes to look through a pantry of botanical ingredients and bar staples, then 15 minutes to conceive, prep and create a cocktail for the judges.

What follows is an inspiring mix of creativity, camaraderie and panic. Mark Tubridy, of Manhattan’s 21 Club, brainstorms his drink both theoretically and strategically—how to balance the acid, which minute mark to strain and taste for sweetness at. He makes an analogy about a subtle almond component in his drink. “I was in a recording studio and this producer banged on a phone book and placed that sound under the kick drum,” he says. “You don’t really hear it, but it enhances the drum sound from underneath.”

Across the room, Marta Ess, the lone Canadian finalist, is feeling good. “I created my drink beforehand and just prayed that all the ingredients I needed would be there. They were.” James Socci, from Portland, Ore., took a more spontaneous approach. “I read a book on creativity,” she says.  “One group of artists was told they would be graded on their masterpiece. Another was told it’s how many pieces they made—and that’s the group that did better. Instead of trying to perfect a few cocktails, every day I’m going to try something new.”

When discussion time ends, there is a rush to grab ingredients and serving glasses, then make mad dashes between the prep area and the bar stations where cocktails are served to the judges. Tubridy, who had been so calm minutes ago, is visibly shaking in the prep area—“I was worried I was going to cut my hand off,” he later admits. He accidentally dumps liquid into a bowl being used by fellow contestant Nik Zoylinos, perhaps ruining that contestant’s drink. Zoylinos, cool as can be, goes into first responder mode, “Just tell me what it was,” he says. It was only water. They both get back to work.

In front of the judges, the situation reverses. Zoylinos, a former actor once accepted to the Royal Academy of Dramatic Arts in London, is up first. He’s professional, but there’s some post-marathon breathing and stress behind his voice. By the time Tubridy presents, he’s regained complete composure. You’d trust him on you with a straight razor—unless you had just watched him prep.

The next day is the “canvas challenge.” Each finalist has to explain what they’ve already done with a $5,000 grant to fund a creative project and how they would expand their idea if they won the $25,000. Keyatta Mincey-Parker, from Atlanta, envisions a community garden, where bartenders can grow their own ingredients. Derek Stillman, from Miami, wants to create a fermented beverage company. Maggie Morgan, from New Orleans, makes a passionate case for her project, Salon d’Whatever, a pop-up gallery for artists who work in the service industry. She insists artists should keep 100 percent of the profits from any art they sell and has only spent a small portion of the initial $5,000—to make a video of the event. Chicago-based artist Hebru Brantley, a judge for this round, questions her—Shouldn’t the gallery keep something to be self-sustaining? Morgan remains firm, she never wants to take anything from an artist. Why did she need $25,000 if she didn’t spend the original $5,000? “I thought I might get that question,” she says.

If you were in a 1940s film and Humphrey Bogart wanted to introduce you to his favorite bartender, Valentino Longo is who’d you expect to meet. Wearing a double-breasted white jacket with black lapel, he’s got style from his native Italy, sophistication from his London cocktails days and a Miami sense of ease, where he’s currently lead bartender at Le Sirenuse.

For the final competition, the bartenders present an original cocktail while discussing their passion, and Valentino’s is called The Decisive Moment, inspired by his love of photography. He explains the four elements that make a great photo—light, shadow, subject and contrast—then relates each to an ingredient in his cocktail. Bergamot for light, sherry for shadow, Bombay gin for subject and coconut and coffee for contrast. As he pours each ingredient, he places a section of a photograph on a stand, slowly building both the cocktail and the final image—a stunning black and white photo of his wife staring at what has now become the competition’s winning cocktail.

“I practiced that presentation twice a day for the last month,” says the victorious Valentino. “By myself, in front of other people, in front of my dogs. When my dog fell asleep, I thought maybe I needed to change something.” Valentino will use his $25K to fund his project Shoshin—a Soho House for bartenders where they can take classes, try out recipes and explore different concepts. “It’s not easy trying to show the world what you really like to do,” he says. “Building a drink and building a photo have a lot in common, and when the bartender and the customer meet each other through the cocktail—that is the decisive moment.”