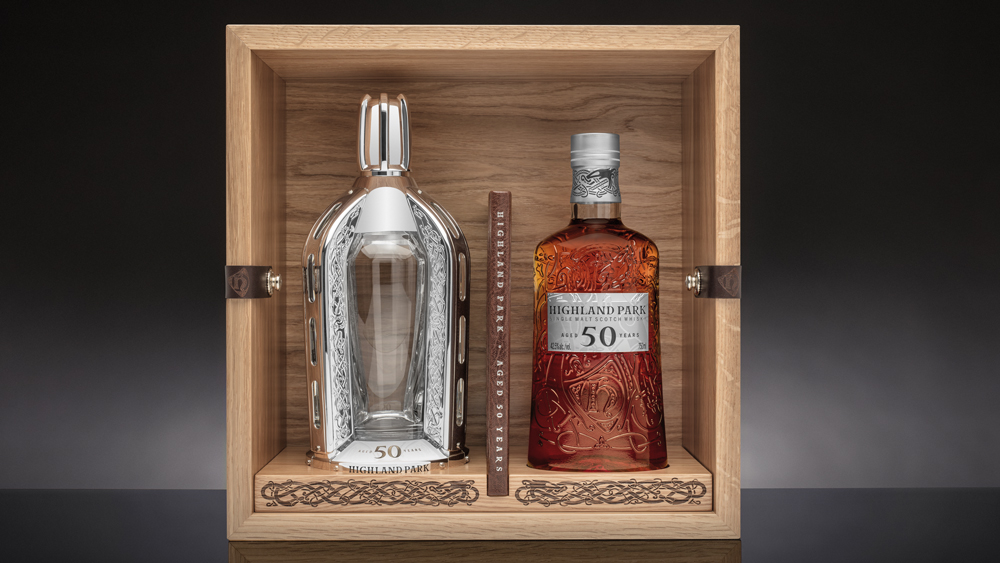 The last few years have seen a spate of beautiful, collectible whisky releases—ranging in age from 40 years old (the Dalmore) to a whopping 72 years old (the Macallan). Both of those distilleries seemed to have nearly cornered the market on rare expressions of late. So it’s good to see another favorite whisky maker, Highland Park, walk on stage this fall with a new 50 Year Old expression ($15,000). Of course, Highland Park and the Macallan are stepsiblings under Edrington’s parentage, so perhaps it’s also a bit of one kin learning from another’s success.

Regardless, there’s cause to rejoice about this new single malt—it will certainly gain value on the secondary market and over time (that is, if you can manage to acquire one of the 274 bottles released and can resist sipping it now). The amber inside comes mostly from the two hogshead casks, originally laid down in 1964 and discovered at the back of Highland Park’s warehouse number seven in 2008.

The distillery, knowing the rarity of what those 1964 casks held, decided to treat them like royalty—removing them one at a time from their warehouse home on Orkney Island, just in case some coastal storm wanted a sip during their travels. Once safely on Scotland’s mainland, the casks were united and then augmented with a splash of the distillery’s other 50-year-old whisky, which was released in 2010 and came from a batch barreled in 1960. “It means there’s a thread of continuity, a legacy within a legacy, in each of these 274 bottles,” says Max McFarlane, Highland Park’s master distiller.

The whisky is a smooth 85 proof and opens with notes of sweet dark cherries, thanks to the sherry seasoning of its original casks. Toasted wood and rich dried fig and apricot come to the fore mid-palate, with cedar and the brand’s signature hint of peat wrapping into the finish.

Each embossed and signed bottle, beautiful in its own right, is packaged in an oak box with an etched silver and crystal decanter made especially for it. Bottles will be available in September and October, but the distillery will start taking orders pronto.