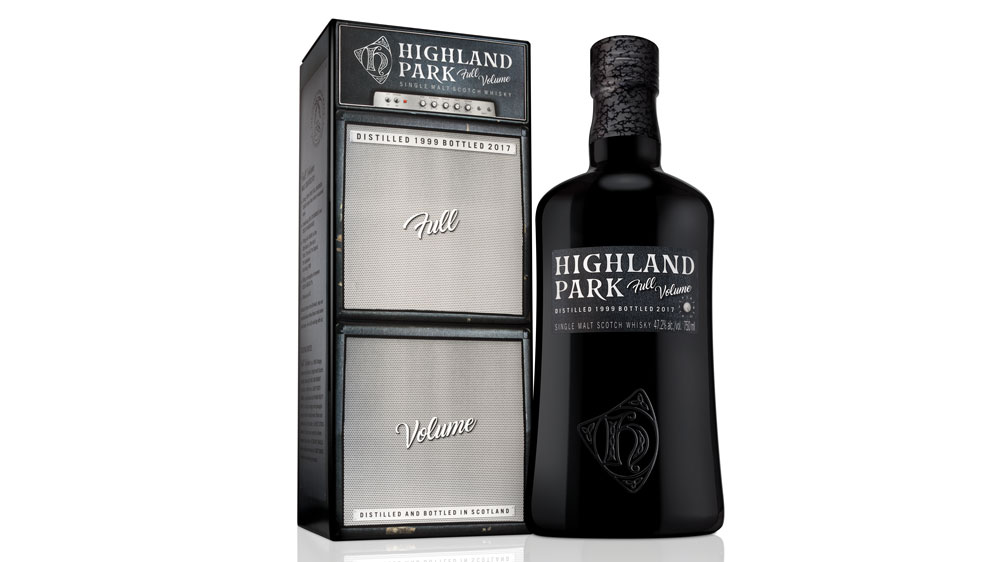 Rock and roll and American whiskey have been intertwined for decades. Musicians such as Keith Richards and Motorhead’s Lemmy became notorious for performing with a bottle of Jack Daniel’s in hand up on stage during any given night. But whisky from the other side of the pond (specifically single malt scotch) hasn’t been as enmeshed with the music scene as its American cousins. Highland Park is trying to change that by getting into the rock-and-roll spirit with a new release called Full Volume ($100).

The packaging immediately jumps out at you with a box seemingly designed with a Marshall stack guitar amp in mind. Dials on the side are labeled peat, bourbon, fruit, and vanilla, each set to signify that particular flavor’s importance in the palate (peat is set at 3, vanilla at 9). There’s also a volume dial cranked up to 11, no doubt a nod to the famous scene in This is Spinal Tap, where lead guitarist Nigel Tufnel explains that when you really need to go over the top, you go to 11.

Full Volume is very different from other Highland Park expressions, with just a whiff of peat and no sherry flavor. The whisky was distilled in 1999 and bottled in 2017, giving it 18 years to mature solely in ex-bourbon barrels, as opposed to Highland Park’s usual heavy use of sherry casks. This has imparted dry spice, citrus zing, soft oak, and vanilla notes into the liquid, which was bottled at 94.4 proof.

Highland Park set out to craft a Scotch whisky inspired by the ways music producers collaborate with musicians, instruments, and amplifiers, shifting chords and improvising to create a song. Ultimately, that might require a little bit of imagination to perceive when taking a sip, but it’s no stretch to say that this is a flavorful, harmonious, and even melodious whisky.