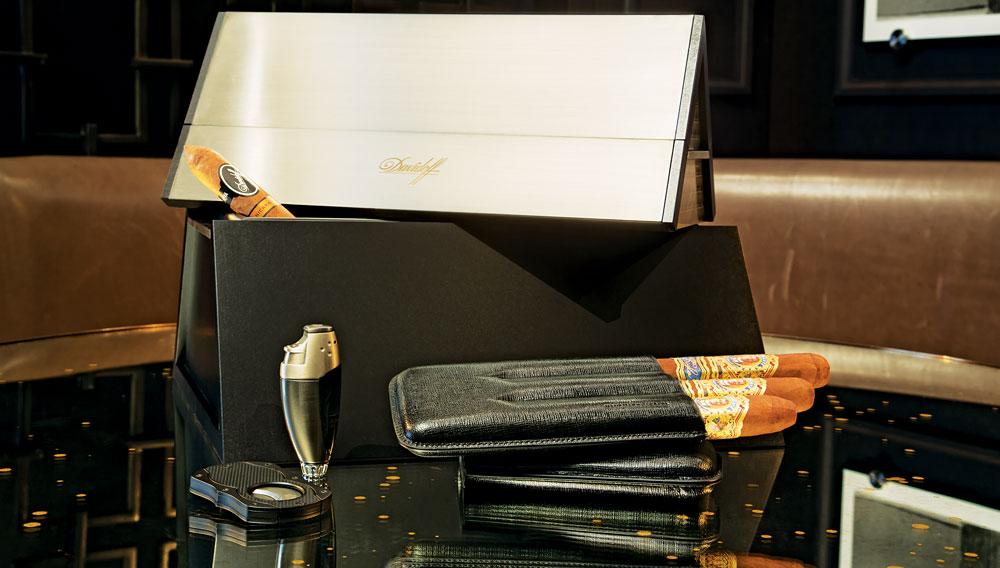 The Arturo Fuente 100th Anniversary Destino Siglo ($416–$520; www.cigar​family.com) is aptly subtitled Autor. The limited-edition book-shaped boxes are dedicated to the story of the Fuente family and are filled with 26 100th Anniversary Dominican puros in two rows of 13—the Fuente family’s lucky number. Most of the tobaccos were grown at Château de la Fuente, but from different seeds than those used for OpusX. Four sizes are available—perfecto, toro, Churchill, and corona gorda—all of them rolled with tobacco saved from a fire in the Fuente warehouse last year. Now they are ready for, as Carlito Fuente says, “the beginning of the next century of our family’s history.”

Earlier this year, Davidoff (under its new name of Oettinger Davidoff AG) caused a stir when it branched out from the Dominican Republic and launched a line of meticulously blended Nicaraguan puros. To celebrate its new venture, the company has created the limited-edition Davidoff Nicaraguan Triangular Humidor ($3,060, or $3,900 including cigars; www.davidoff.com), inspired by the country’s legendary volcanoes. Each of the 250 humidors, made of etched wood and metal, separates into three sections and contains 48 Nicaraguan belicoso puros—part of a special run of 12,500 cigars worldwide. Only 100 humidors have been allocated to licensed Davidoff dealers in the United States.

General Cigar has reached deep into its vast Dominican Republic warehouses to provide three of its rarest cigars for the Bespoke Collection ($1,999; www.cigar​world.com). The Macanudo Vintage 1988 includes some of the brand’s original Jamaican tobaccos in its blend, while the Cohiba Edición Diamante features an ultra-aged and rare 1980 Cameroon wrapper. The Partagas Limited Reserve Decadas 1995 is no longer in production. Twenty of each, for a total of 60 cigars, are housed in a handmade humidor from the Dominican Republic; 100 humidors are available.