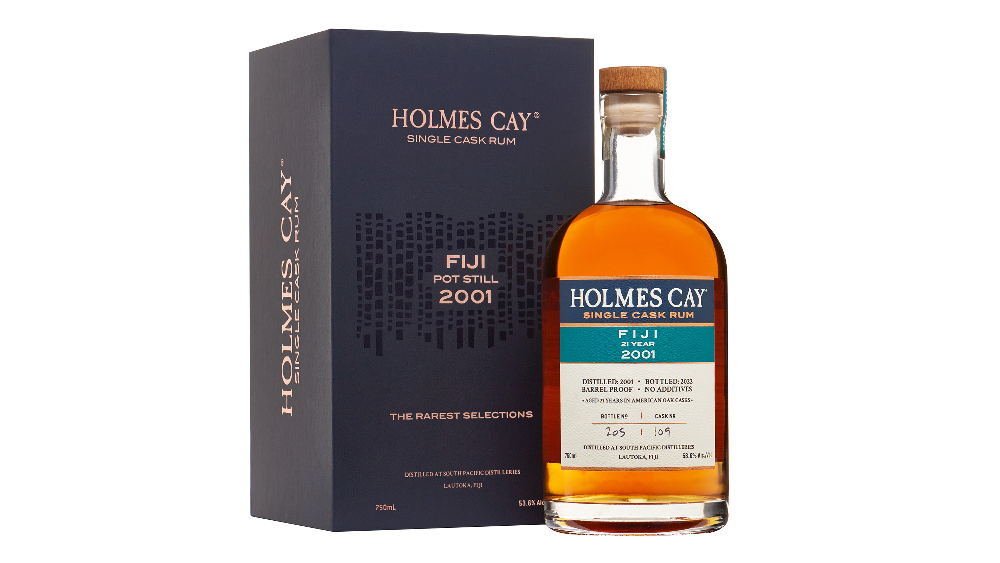 Holmes Cay is a champion of single-cask and single-origin rums, often bottled at cask strength, with a lineup of expressions from all over the world that have one thing in common—there are no additives in the rum, something that is sadly not the status quo. The brand just announced the release of two new rums from Barbados and Fiji, the oldest in its lineup to date, as part of its Rarest Selections series.

The Fiji rum is a 2001 vintage ($249) made from molasses in a pot still at South Pacific Distilleries, the only distillery in the country that is now known as Rum Co. of Fiji. According to the brand, this is the oldest Fijian rum ever released at 21 years old. It was initially “tropically” matured for two years in an ex-bourbon cask before heading to the UK for another 19 years. Twenty-one years is a long time for sure, but the majority of time spent aging in the milder climate of the UK played a factor in allowing it to spend so long in a barrel without becoming overly oaky. This rum was bottled at barrel proof of 53.8 percent, and has notes of brown sugar, vanilla custard, tobacco and oak.

The Barbados rum ($349) is slightly younger, a 2002 vintage pot still rum made at the famous Foursquare Distillery on the island. This 20-year-old rum was barreled into an ex-bourbon cask and then shipped to the UK for its full maturation. It was bottled at barrel proof of 51.1 percent ABV and has notes of apricot, citrus, honey, some yeasty dough and oak on the palate.

“Casks like the Fiji 2001 and Barbados 2002 Pot Still are each exciting and historic taste opportunities that are almost never available,” said Holmes Cay founder Eric Kaye in a statement. “Widening awareness of and access to such exceptional rums is one the reasons we founded Holmes Cay. One cask of each, fewer than 200 bottles of each expression, has been bottled.”

Many of the past releases from Holmes Cay have sold out, as there are only so many bottles in existence particularly when it comes to the single cask expressions. It is likely that these limited-edition bottles will follow suit, but lucky rum lovers will hopefully be able to score a bottle this fall.